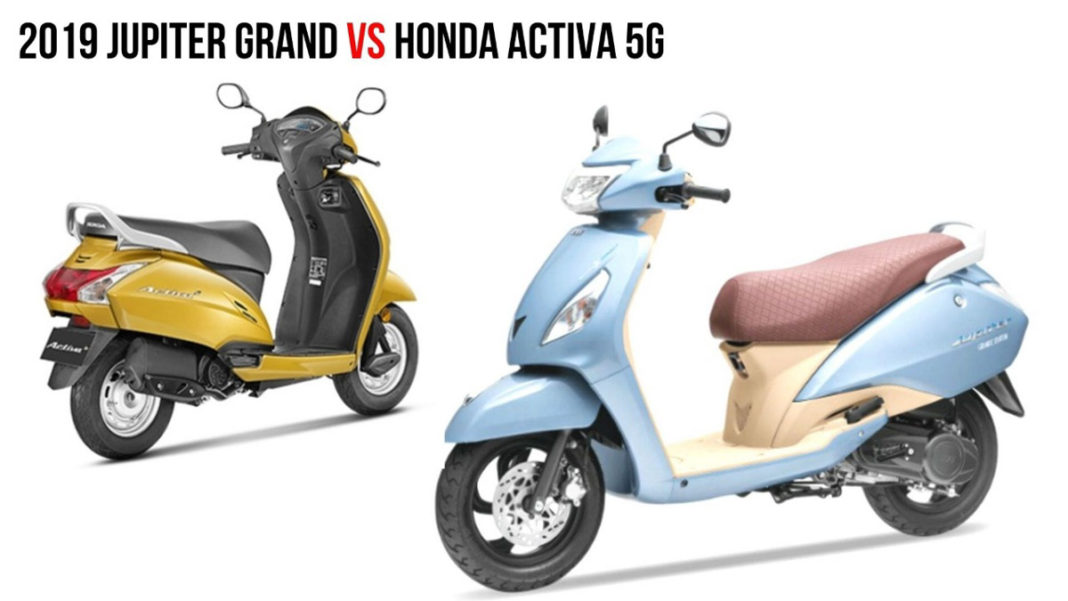 TVS Motors recently launched the updated Jupiter Grande Edition in India. The scooter has received few cosmetic updates and a new SmartXonnect connectivity feature which was available with the premium Ntorq 125 until now. After the inclusion of this new feature, the TVS Jupiter Grande Edition became the first 110cc scooter in India to receive the new Smartphone connectivity feature.

The TVS Jupiter Grande Edition competes directly with the Honda Activa 5G. They both are powered by a 110cc, single-cylinder, air-cooled engines and is almost priced in the same range.

The TVS Jupiter has always been popular amongst the buyers for its over the top features that it offers compared to its rivals. The updated Jupiter Grande Edition, in particular, gets a full LED headlamp, a chrome garnishing on the front fender and rearview mirror, a premium maroon seat with cross stitches, beige interior panels and lastly a machined alloy wheel. 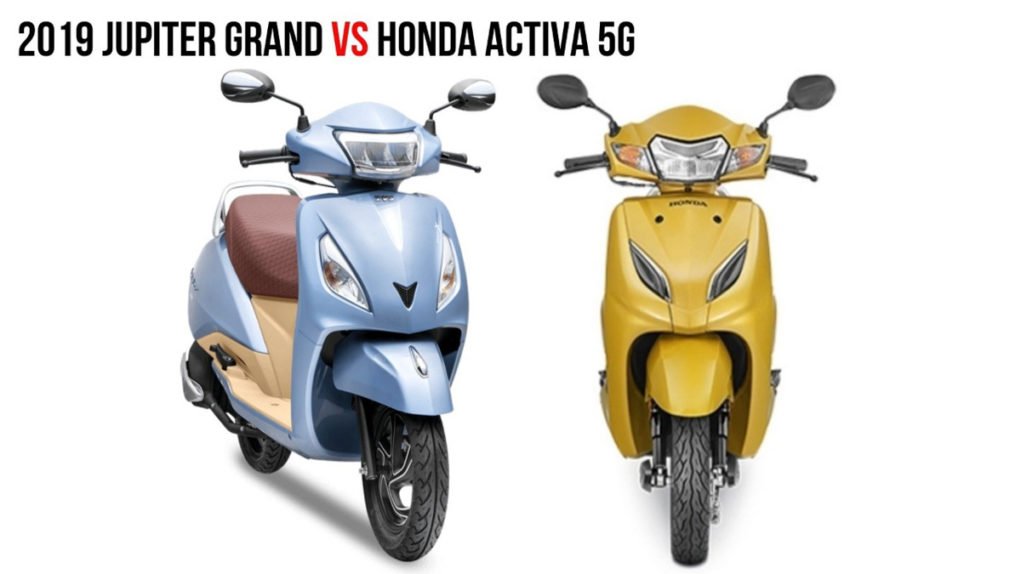 The scooter also gets a new tech blue body colour as well. The key slot is located on the left side panel to access the fuel filler cap. It also gives an access to the boot opener.

The updated Jupiter Grande Edition like we already mentioned above gets the new SmartXonnect feature that connects the rider’s Android or iOS smartphone to the scooter to receive call alerts and text notification, overspeeding alert and trip details. The phone can be connected with the scooter via an app. 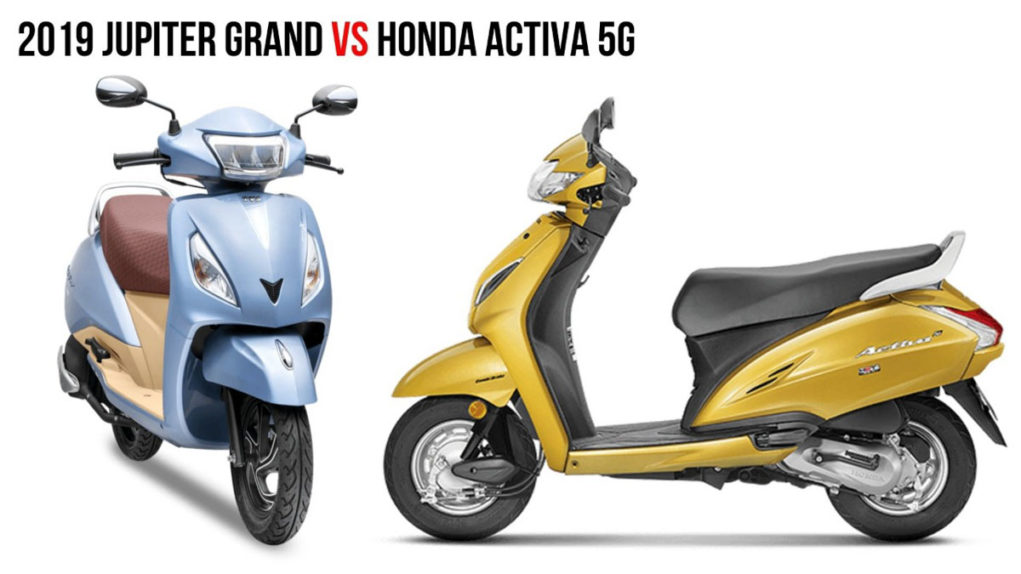 The Honda Activa 5G too gets a full LED headlamp and twin chrome elements on its front apron. Unlike the maroon seat, the Activa 5G gets a black seat, a standard floorboard and handlebar. Both the scooters get a hook in the front for carrying stuff.

The Activa 5G, in particular, gets its seat opener switch located beside the ignition while the fuel filler cap is located under the seat. The Honda Activa 5G also gets a semi-digital instrument cluster just like its rival that provides standard information like speedometer, odometer, fuel level indicator and an additional service due indicator. 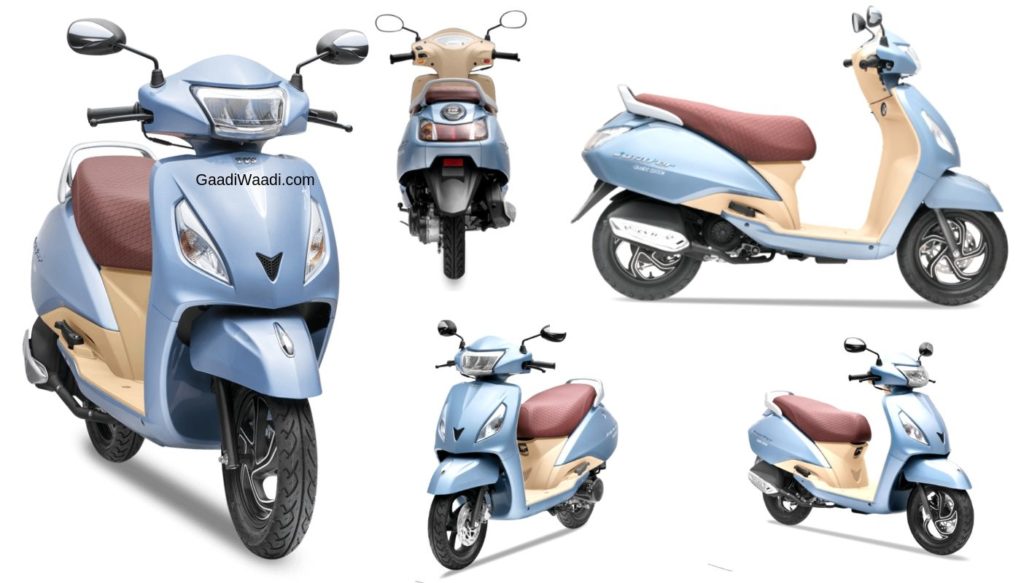 The braking duties are handled by a 130mm drum brake at both ends. It also gets CBS (combined braking system) as standard for the safety of the rider. A front disc brake is not even offered as ana option with any of the scooters. 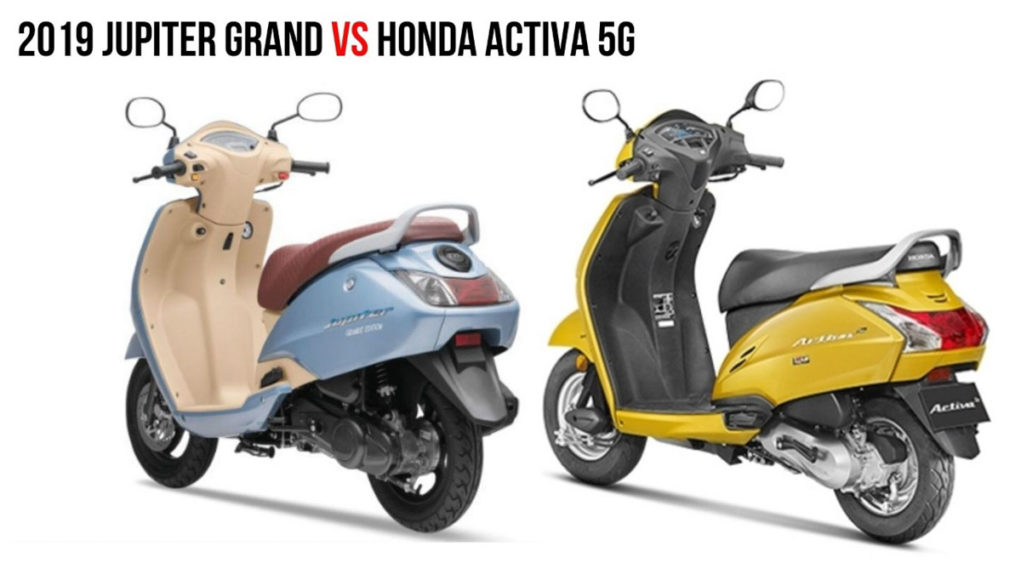 The Honda Activa 5G uses a Spring loaded hydraulic type setup at both its front and rear as its suspension setup. The braking duties of the Honda Activa 5G are taken care by a 130mm drum brake at both ends. The Activa 5G too gets a CBS (combined braking system) as standard.

Both the Jupiter Grande and Activa 5G produce almost the same amount of power and return almost equivalent fuel efficiency figures. Lastly, both of these scooters offers great value for money and are almost priced in the same range.