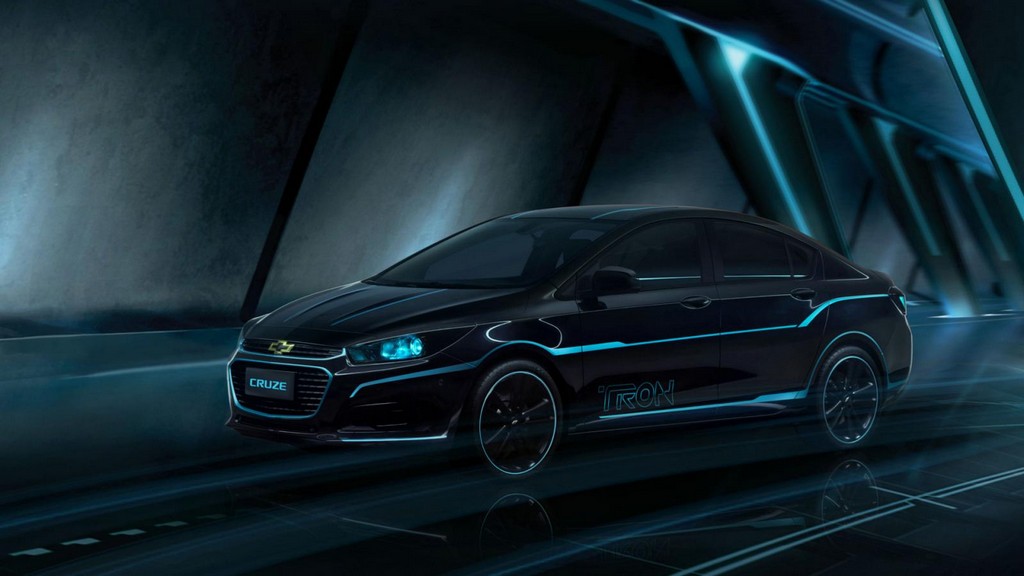 At the 2016 Beijing Motor Show, Chevrolet celebrated the opening of Shanghai Disney Resort on June 16 by unveiling a show car inspired by the Tron: Legacy movie which was a Hollywood science fiction blockbuster when released five years ago. The stylish Cruze has been modified in partnership with The Walt Disney Company China and Chevrolet says it symbolises a bold vision towards car personalisation.

The Beijing show has had all the recipes for crazy concepts over the years and this year it’s been no different courtesy of this weird Cruze and some other Chinese desperados. First thing is the name, which the concept doesn’t have a specific one in particular. The unnamed-concept was painted in black with striking blue accents applied to the bumpers at front and rear, on either side, the boot, grille area, the curvy roof and on the bonnet. The American automaker has said the special metallic paint gives the exterior a futuristic aura with the noticeable blue-light highlights in the smoked out headlamps and taillamps. The front and rear optic blocks are adorned with reflective material behind the tinted glass house in a light-blue colour while the front doors bear ‘Tron’ lettering. If you had thought, the concept is nothing but night-glowing gimmick then, you are obviously wrong. The blue accents the sci-fi movie was famous for can also be found on the inside. The interior blue stripes generate a contrasting look with large black surfaces and of course the ambient lighting is also ice-blue. The yellow bowtie logo certainly escaped from Chevrolet’s treatment of either blue or black colour theme. The leather wrapped seats, AC vents, centre console, floor mats, instrument panel and multi-functional steering wheel have all been garnished with blue highlights. The concept is based on the new generation Chevrolet Cruze sedan and thus the mechanicals remain the same. For the Chinese market, it’s offered with two different engines: a 1.4-litre turbocharged motor and a 1.5-litre unit. The latter four-pod mill is good enough to produce a maximum power output of 112 hp and 145 Nm of peak torque.
The turbo 1.4-litre engine churns out 147 hp and 234 Nm of torque and comes linked with a seven-speed dual clutch automatic transmission. It can do the 0-100 kmph sprint in 9.9 seconds and has a top speed of 200 kmph.