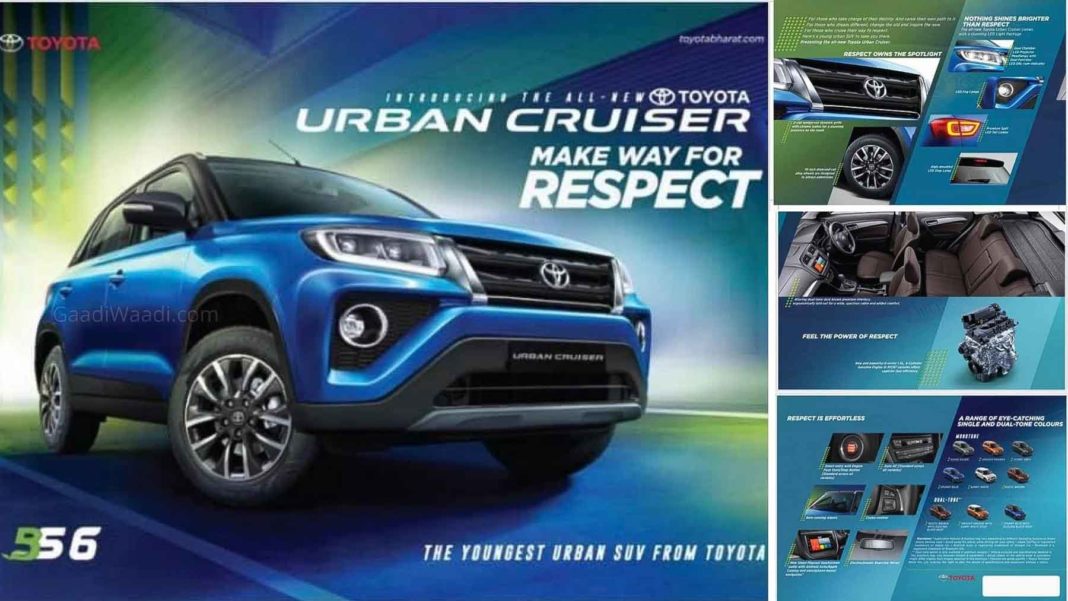 Toyota Urban Cruiser is all set to launch on 22nd September in India, to get more premium features as standard than Vitara Brezza

Toyota Kirloskar Motor has recently announced that the bookings for the upcoming Urban Cruiser crossover SUV will officially begin in India on August 22, while its launch has been scheduled for September. Toyota’s rebadged Maruti Brezza has managed to create a decent buzz in the market, and is expected to attract a lot of buyers towards Toyota dealerships.

Even before the vehicle’s official unveiling, its brochure has been leaked online. In it, we can see all the details about the little Toyota crossover, from its styling to the list of equipment. Here, we shall discuss everything worth discussing about the upcoming Toyota Urban Cruiser.

The official teasers of the Toyota Urban Cruiser had given us a small glimpse of its exterior styling. The front end of the car has been redesigned, to help differentiate it from Maruti’s offering. The grille juts forward from the rest of the face, and sports two thick horizontal slats with the Toyota logo in the centre. The front bumper has two large faux air vents, one at each end, which house the LED fog lamps inside. Overall, the vehicle offers a subtle resemblance to the Fortuner, which lends it a slightly premium look. 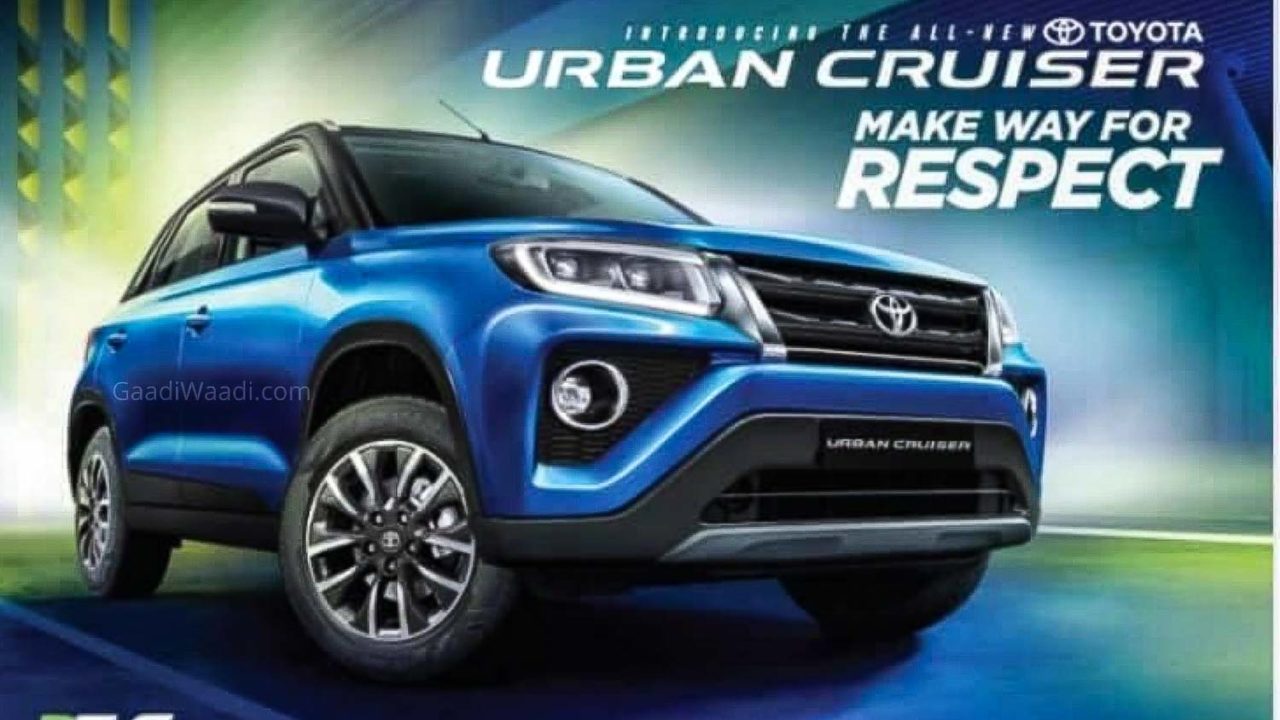 The rest of the design, however, is the same as the Maruti Vitara Brezza. The headlamps are LED projector units, and the DRLs and turn-indicators are LED as well. The LED taillights are also identical to the Maruti’s and we also see a roof-spoiler and a high-mounted stop lamp here. The silhouette of these two crossovers is identical, and the 16-inch diamond-cut alloy wheels also have the same design as well, except for the different branding. 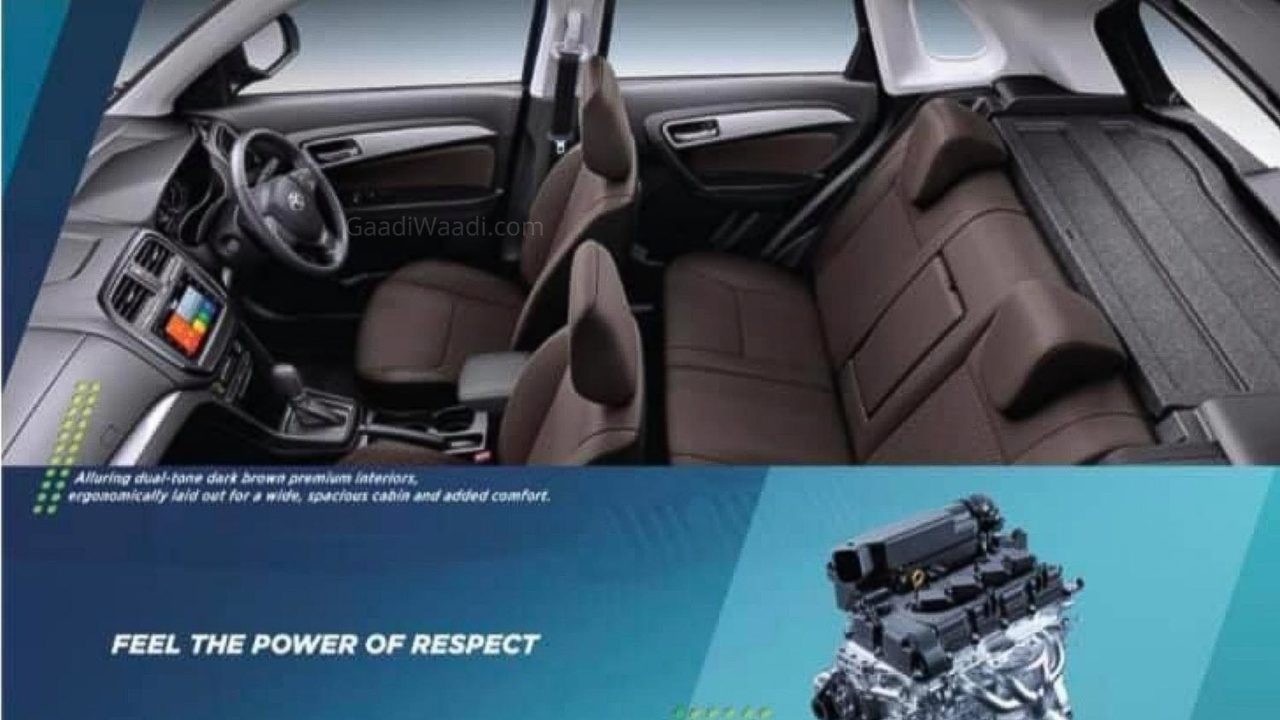 The design of the Interior is the same as the Maruti Brezza; you get a plain dashboard design, with an infotainment screen integrated into the centre console, and the floor console gets a few cubbyholes for storing knicks and knacks. There is a centre armrest for the front passengers, and a folding armrest for the rear ones.

Even though the design of the cabin is completely same, the colour theme is different. The Urban Cruiser gets black interior panels, brown seat upholstery and door panel inserts, and a white headliner. Personally, this small change helps the Toyota crossover look a little upmarket compared to its donor car. 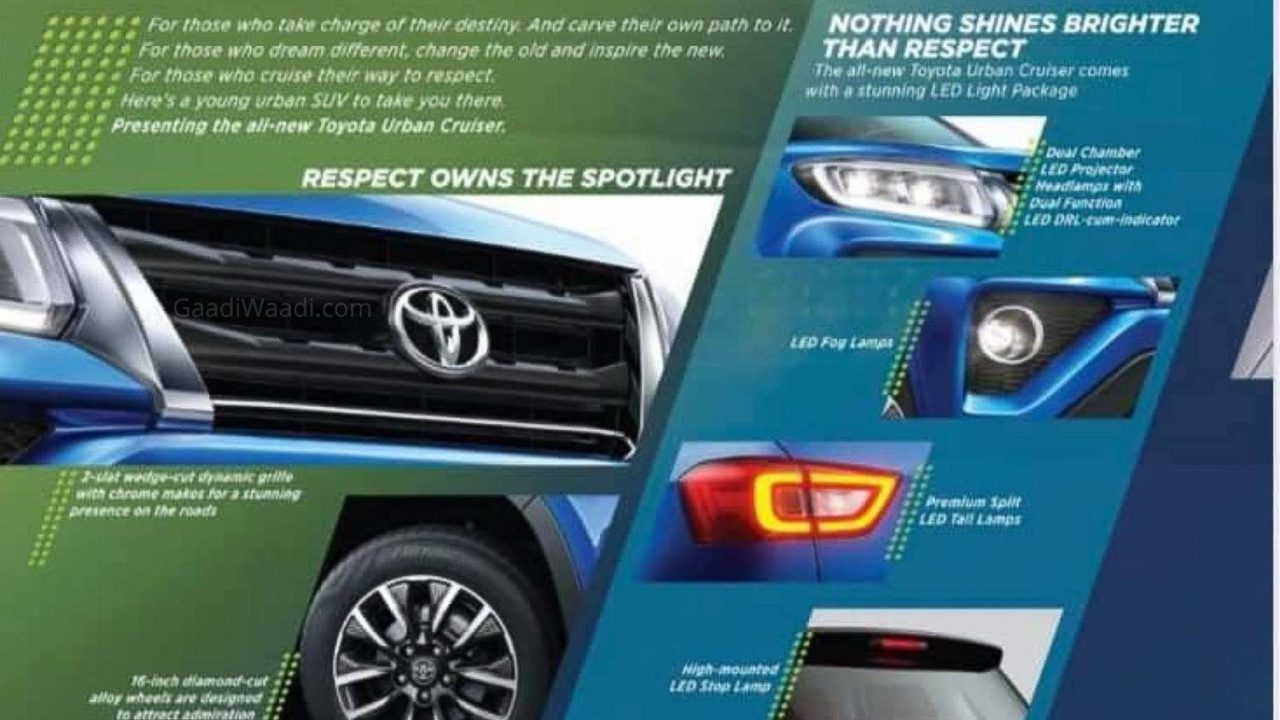 The upmarket feel continues on the Toyota with the equipment list. The Urban Cruiser will offer automatic climate control, keyless entry, and push-button start/stop on all trims. Other than that, it will also get rain-sensing wipers, cruise control, a 7-inch touchscreen infotainment system, auto-dimming IRVM, rain-sensing wipers, and steering-mounted controls.

The Toyota Urban Cruiser will offer the same engine as the Maruti Brezza – a 1.5-litre, naturally aspirated, inline-4 petrol motor. This powerplant can generate a maximum power of 105 PS and a peak torque of 138 Nm. Transmission options will consist of a 5-speed manual and a 4-speed automatic. 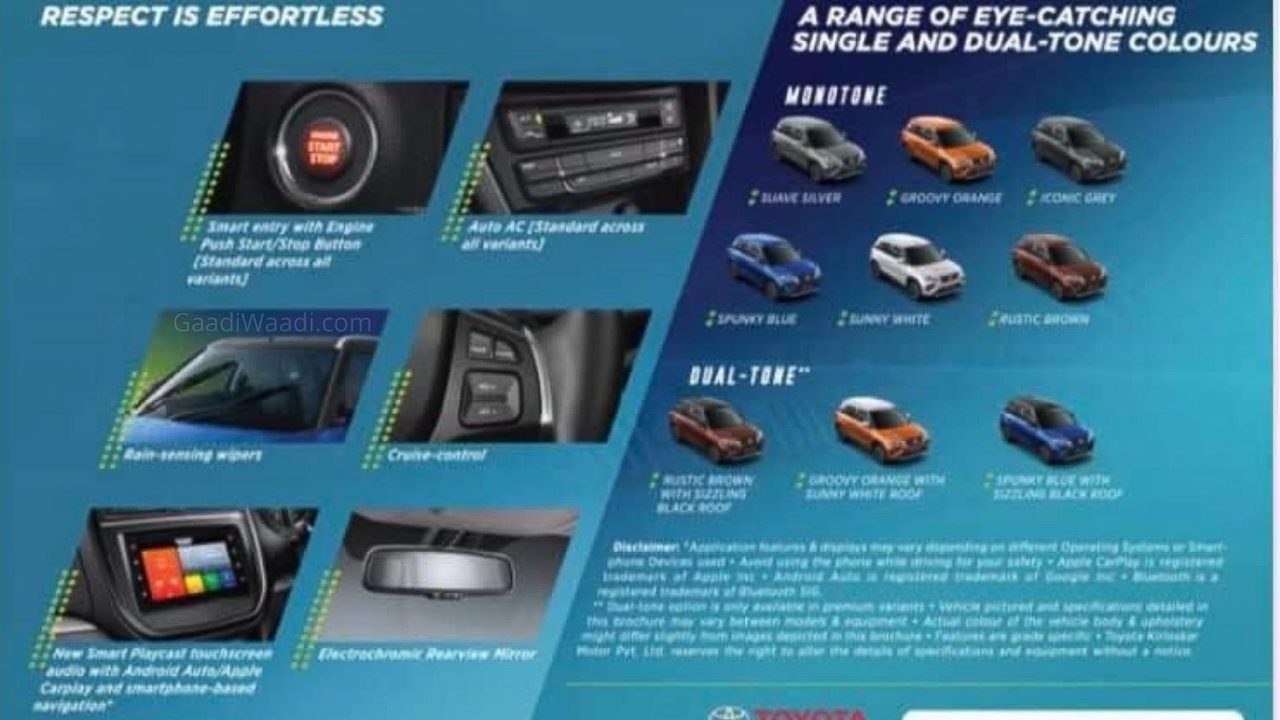 The SUV will also sport SHVS (mild-hybrid) system, to boost fuel-economy, although it isn’t mentioned in the brochure, and we aren’t sure which variants will get them. On the donor car, i.e., Maruti Brezza, the mild-hybrid system is only offered in the AT models. That said, the Urban Cruiser is being offered as a more premium offering, so there’s a chance it could offer SHVS in both manual and automatic variants.

Sadly, the brochure doesn’t mention the pricing or the trim-levels on offer in the Urban Cruiser. Considering how the little Toyota crossover is more premium than its Maruti twin, we expect its price to be only slightly higher, probably between Rs. 7.9 lakh and Rs. 12 lakh (ex-showroom, New Delhi). Upon launch, Toyota Urban Cruiser will compete against the likes of Hyundai Venue, Tata Nexon, Mahindra XUV300, the upcoming Kia Sonet, and of course, the Maruti Vitara Brezza.