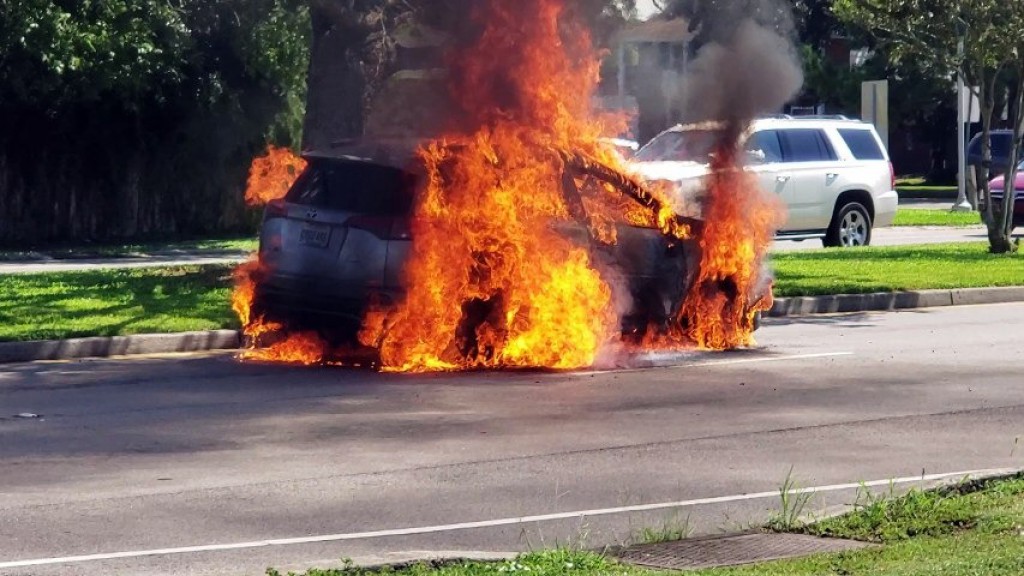 Most of the new cars are loaded with modern technologies and they have more electrical components than a house. Due to quality problems, we have seen some cars caught fire and it is not the best things to see as people can get injured in these types of incidents. Recently a Toyota RAV4 caught fire in Kenner, Louisiana, USA.

Luckily all passengers escaped without injuries and firefighters quickly arrived to stop the flame. Then the fuel tank of RAV4 exploded and firefighters were lucky not to get injured. One of the people recorded the complete incident and in the video, he uploaded on Youtube, we can see that the RAV4 in fire and then how the firefighters escaped the accident.

According to the person who recorded video “The vehicle was venting gasses and flaring up very quickly. After firefighters started to try to extinguish the blaze, the fuel tank exploded and engulfed two firefighters in flames causing one of them to lose his helmet and have to hosed off for burns. I was able to film until the fire was finally under controlled and then the policed ordered everyone to evacuate the area.”

The reason for the fire is not known yet and the RAV4 is not one of the reliable cars from Toyota as it known for lots of issues. In 2012, more than 8 lakh Toyota cars including RAV4 was investigated for a possible fire risk and the fire was originating from the power window master switch located on the driver’s door.

The RAV4 manufactured between 2007 and 2009 were involved in this investigation and since then Toyota has made some changes to the master switch which solved the fire risk. But the RAV4 which caught fire in this video is a new model and this is the first time such an incident have been reported.

Maybe it will be a one-off incident as cars catching fire is not a new thing and we don’t know the condition of the vehicle. Some of the popular problems experienced by RAV4 owners are excessive oil consumption, loss of power at highway speeds, oil leak, loss of oil pressure and more. We can expect more details to be revealed in the coming weeks regarding this incident.