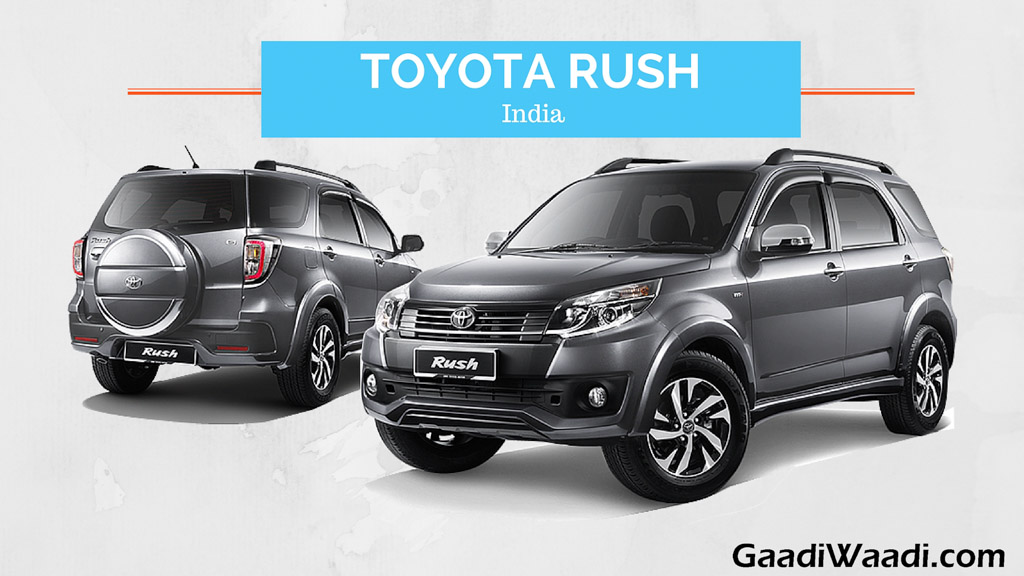 Toyota is clearly targeting main share in the premium segment. However, it also wants a major pie of the volume market and thus all set to start fresh this time.

Apart from Daihatsu’s plans for India, which will be a fresh and upmarket Honda City rival, the rumors in the last couple of months suggest that the Rush compact SUV will come to India later in the year 2016. It has the potenital as it got appealing styling and suspected to be good on the inside.

We expect the car to be launched in late 2016 after debuting at Auto Expo 2016 in February to create buzz for the vehicle at the motor show. Prices could start from 5.5 lakhs if the car is localised with engine and production being done in India.

We could get 1.2 petrol engine seen in the Liva and a 1.4 diesel engine from the Etios twins but making more power and torque. Petrol makes around 88 BHP and currently the 1.4 Diesel makes 70 BHP. It should be tuned to deliver 90 BHP or slightly less. Any new engine if it may come will be a 4-cylinder unit under the 1.5 litre category. An automatic transmission is also on the cards.

Expect class leading mileage for the car which should stand at 17 km/l for the petrol and 24 km/l for the diesel. On the face of it, the Rush looks every bit like a compact SUV with a boxy design and yet it is laden with modern desin cues in the form of tail and head lamps. The rear window area is heavily inspired by Fortuner and so is the side profile. Front-end is busy which should appeal to most buyers here.

Dimension:
It’s a compact SUV which, if it comes to India, will fall under the sub four meter category and will have other dimensions standard for this category.

Colours:
Black, white, silver and colors could probbly be part of the palette

Interior:
Expect class leading interior space in all rows of the this compact SUV. Key Features:
It could have everything such as touch screen with Bluetooth, aux and USB along with fully electric ORVM’s, seat height adjusters, UV cut glass and dedicated air vents for the rear seats.

Safety Features:
Dual airbags, ABS with EBD will be standard along with other standard features such as 3 point seat belts all around with crumple zones.