A test mule of the Toyota RAV4 was spied during a road test in India, sparking speculations about the SUV’s launch

Toyota Kirloskar Motors has been planning to launch the RAV4 SUV in India for a long time. Now, the vehicle has finally been spotted in India during a road test. The upcoming Toyota RAV4 will likely be brought to our market as a CBU (Completely Built Unit) import in limited numbers, to take advantage of the homologation relaxations.

In this spy picture, the test model seems to have a ‘Hybrid’ badge above the front wheel arch. With electrification slowly gathering pace in the Indian automobile industry, this seems to be a wise choice by Toyota. Other than that, we also see that the vehicle gets square-ish wheel wells, chrome door handles, and single-tone alloy wheels. The tailgate gets chrome embellishment, and the interior seems to have an all-black theme, with a floating type touchscreen for the infotainment system. 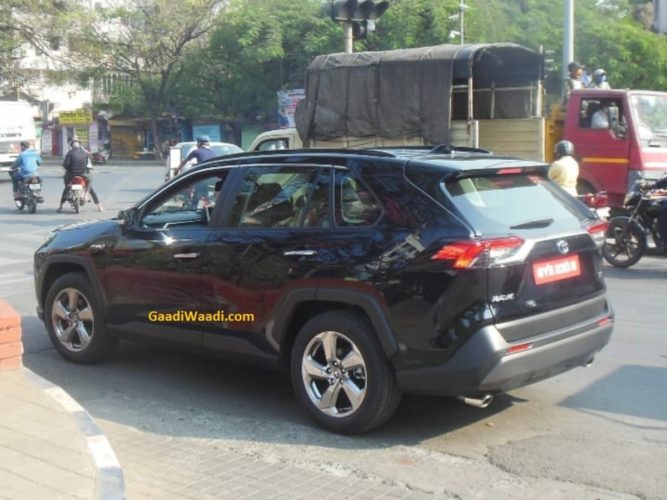 Toyota RAV4 is underpinned by the TNGA platform and has quite generous dimensions. It has a length of 4,600mm, a width of 1,855mm, a height of 1,685mm, along with a 2,690mm long wheelbase. However, the SUV is only available in a two-row (5-seat) configuration.

The exterior design of the Toyota RAV4 is rather sharp and futuristic, with sleek headlamps, a wide front grille, sleek taillights, etc. However, the side profile is quite boxy, which lends a simplistic silhouette to the car. The interior design is also quite simple, but not at the expense of a premium feel. There are plenty of soft-touch surfaces in the cabin, including the dashboard and inner door panels.

The hybrid version of the Toyota RAV4 is powered by a 2.5-litre petrol engine, which works alongside two electric motors. The combined power output from this petrol-electric hybrid powertrain is 219 HP, and transmission options are limited to a CVT. Upon launch, which is likely to happen later this year, we expect the Toyota RAV4 to be priced somewhere between Rs. 40 lakh to Rs. 60 lakh (ex-showroom).