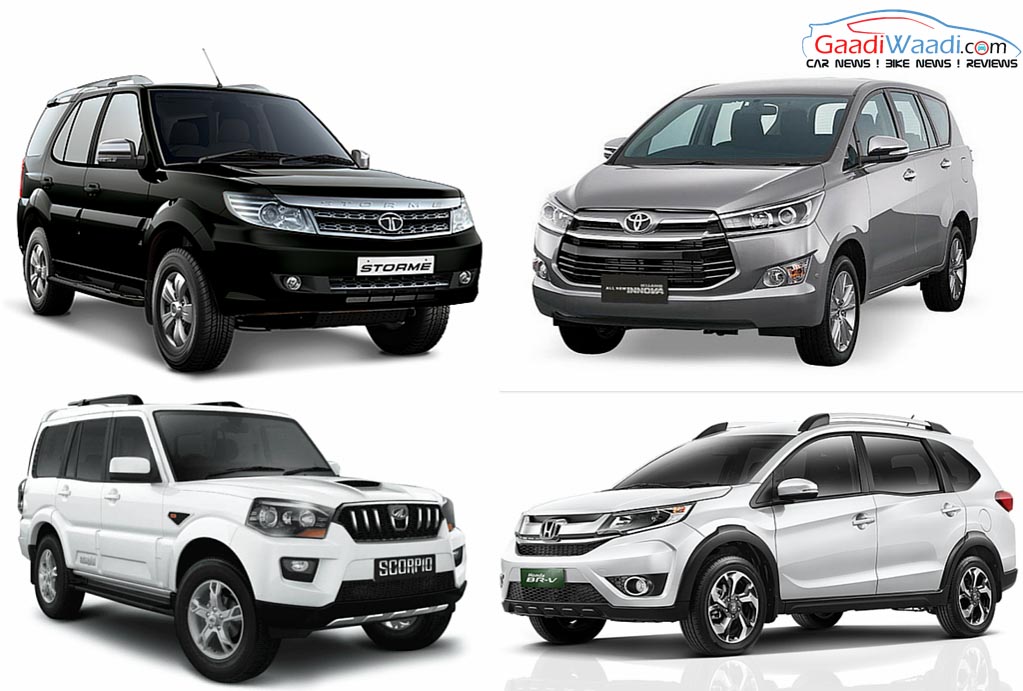 In May 2016, Indian automotive market was experiencing spectacular launches of new cars. One was Honda’s compact SUV BR-V, while the other one was the Toyota Innova Crysta which is a restyled all-new Innova. You might be wondering, how the Toyota Innova Crysta fits in this comparison with the Tata safari Storme and Mahindra Scorpio, as both are perfect SUVs.

Well, Toyota has equipped the Innova Crysta with so many features and powerful engines, that it can actually act like a SUV as well as a MPV. The new Toyota Innova Crysta comes with powerful engines like the Toyota Fortuner, which gives it an edge among the SUV loving customers as well. Talking about the Honda BR-V, the car is basically a blend between SUV and MPV, so cannot be called as a true SUV.

It is taken into account here because of some subtle reasons. The Scorpio and Safari make for a strong rivalry over the last decade or so and they have definitive characters as much as the Innova Crysta to define their solidarity in the Indian market. With four cars of different flavours and some obvious coincidences by being people carriers, here we take a look at the spec comparison between them: The Tata Safari Storme might not be very appealing for many people, but it is surely a practical SUV which is truly Indian. The front fascia gets a chrome bar running between the headlamps. The front grille gets a honeycomb pattern. The side profile gets a muscular appearance with protruding wheel arches, cladding like part at the lower body. The ORVMs get side turning lights and chrome cap. The glass area gets blackened pillars, and the roof rails make the car stylish. The rear doesn’t have much to boast about. Mahindra Scorpio is one of the most popular SUVs in India. It comes with an aggressive look featuring teeth like chrome garnished grille, sharp headlamp cluster sporting projector units and integrated LED daytime running lights. The side profile gets a side body cladding, sporty roof rails, muscular and boxy appearance. Honda BR-V looks as similar to the Mobilio MPV in many ways. It gets H shaped chrome bar at the front with honeycomb pattern front grille. The sharp headlamps get LED daytime running lights. The side profile of the car gains roof rails, side body cladding, alloy wheels, blackened pillars. Although claims to be a compact SUV; it appears lot like a MPV. Thus far, Innova Crysta is the longest among the lot, while Tata Safari gets the best width and Mahindra Scorpio is the tallest. On the wheelbase front, Toyota Innova Crysta is undoubtedly the winner, and when it comes to ground clearance, Safari wins the race. It is clearly visible that the Honda BR-V remains behind the other three in the fray. The Toyota Innova Crysta sports a premium look inside the cabin with the new Toyota Fortuner’s dashboard, multifunction steering wheel, ambient lighting at the stylish instrument cluster, eight-inch touchscreen infotainment system at the centre console, wooden trim at the dashboard, and chilled glove box. Being a seven-seater, the Innova Crysta is very spacious and sports several features offering comfort and luxury to the occupants. The Tata Safari Storme gets a multifunction steering wheel, CONNECTNEXT infotainment system by Harman, six-speaker surround system, reverse parking sensors, etc. The higher driver seat position of the car is an added benefit for the driver. Mahindra Scorpio’s interior is simple, practical and comfortable at the same time. It gets a multifunction steering wheel, stylish instrument cluster, and minimalist centre console with a digital display. The dashboard gets a dual tone theme. Talking about the interior of the Honda BR-V, it sports a sporty black theme which is complemented by multifunction steering wheel, three dial consisting instrument cluster, 6.1 inch touchscreen infotainment system.

If we talk about interior, no wonder Innova Crysta comes luxurious and offering comfort by any means compare to the other cars in the comparison. Tata safari Storme gets power from a 2.2 litre DOHC turbocharged VTT Varicor 400 diesel engine which gets paired with a 6 speed manual gearbox and churns out 156 PS peak power and 400 Nm of peak torque. It can reach 0 – 100 kmph in 13 seconds, and the car deliver fuel economy of 13.9 kmpl.

Honda BR-V on the other hand, gets two different engine options. A 1.5 litre SOHC i-VTEC petrol engine mated to a 5 speed manual gearbox churns out 118 PS peak power and 146 Nm of peak torque. The diesel engine on the other hand comes in form of 1.5 litre i-DTEC engine paired with a 5 speed manual gearbox which is capable to produce 100 PS peak power and 200 Nm peak torque. The car gets a CVT transmission as well.

Going by the specs, the Toyota Innova Crysta and Tata safari Storme diesel are closer to each other in terms of power. The Mahindra also comes with generous amount of power. On the other hand, the Honda BR-V stays way behind from these three cars performance wise.

The Toyota Innova Crysta gets price tags ranging between Rs. 13.99 lakh and Rs. 21.19 lakh. The Tata Safari Storme comes available from Rs. 10.62 lakh to Rs. 15.61 lakh. Mahindra Scorpio is priced between Rs. 9.66 lakh and Rs. 15.51 lakh. Lastly, the Honda BR-V is quoted with prices starting from Rs. 8.99 lakh and ends at Rs. 13.18 lakh (all prices, ex-showroom New Delhi). Unlike the customers of the competitors, the Innova Crysta’s buyers seeking premium-ness and practicality and thus pricing it a notch above the rivals isn’t hurting much as top-end variants are the most sold so far.

Toyota Innova Crysta is the upmarket vehicle in this comparison and thus is the most expensive. It is packed with features and is a perfect successor to the highly popular old version. With automatic gearbox and plush interior alongside a really comfortable cabin, it appeals to the subjective buyers who are expected to be driven. It has clever storage space and in-car connectivity technologies that are up to the modern standards. It does give a good driving pleasure and feels light on the steering wheel. Topping them of is the powerful engine lineup making a long journey very appealing.

On the other hand, Tata Safari Storme and Mahindra Scorpio are outright work horses. There is very little to choose between them despite the latter being the most sold SUV in recent years. Pricewise they are very evenly matched but the 400 Nm torque Tata offers put a certain advantage over to the Safari. In terms of design, we would say the Scorpio embodies a true SUV spirit as much as the Safari. Over to the BR-V, it is quite a in-the-middle SUV in this comparison.

It does not have an inspiring styling or that it is as boring as the Mobilio MPV. Honda could have changes the silhouette’s design but instead unfortunately stuck with a very old crossover look. On the engine front, it kind of stays in the middle as well. For the customers looking to grab a top-end version of either the Scorpio or the Safari, they might think over purchasing the Innova Crysta because it does elevate their social status altogether as it is a premium MPV.