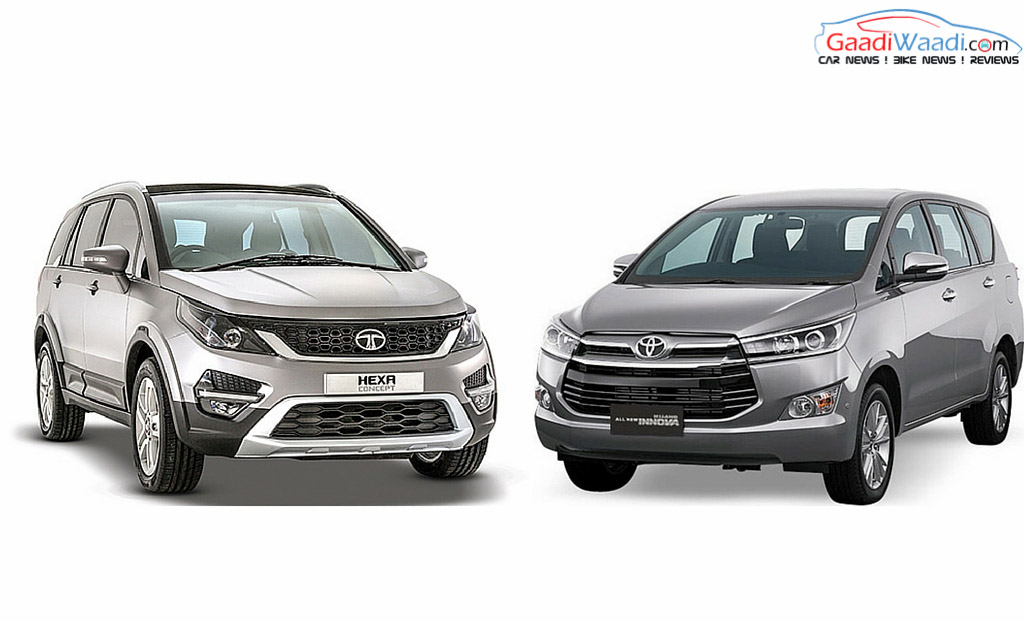 Toyota launched its latest offering, Innova Crysta, for the Indian automobile market on 2nd May ending months of speculation and waiting that went with it. The Innova Crysta is completely different looking when compared to the old generation model of the popular MPV. The Crysta looks stylish and premium, unlike the old model’s dated appearance, while bringing a sharper stance. Apart from that, the new model gets plenty of exciting features inside the cabin. The two new GD series diesel and a 2.7L petrol engines are very much desirable. Toyota has designed the car to make it appealing to the SUV lovers as well.

On the other hand, you can say, Tata Hexa is nothing but a redesigned Tata Aria. However, there is more than what meets the eye. The Hexa was first showcased at the 2016 New Delhi Auto Expo earlier this year in February. The Tata Aria was launched in India with lot of expectation, but the car couldn’t impress the customers despite being a capable machine. Now with the new Tata Hexa, the Indian origin automaker is expecting a good fortune. The Tata Hexa has been designed to deliver an aggressive tone and created with global expertise from JLR.

Tested across different continents, the Hexa carries new design language and looks brilliant from the outside and comes packed with technologies in an expected affordable price bracket. If the lower variants of Crysta has something to worry about, it surely is the Hexa crossover. Here, we take a closer look into how the new Toyota Innova Crysta and the Tata Hexa stack up against each other in a tasty comparison piece: Talking about design, the Toyota Innova Crysta gets a muscular appearance. The front fascia of the car sports a massive hexagonal front grille with dual chrome bars at the top. The swept-back headlamps come sharp looking and they get projector lamps with integrated LED units.

The unusually shaped fog lamps sit at the lower front bumper. The side profile looks beefy with the protruding rear fender, huge wheel arches, and five spoke alloy wheels. The beltline of the car sports a sharp crease, which gets chrome lining as well. The glass area is really huge with the diagonal shaped C pillar. The rear sports integrated roof spoiler with high mounted stop lamp and inverted L-shaped large and wide tail lamps. 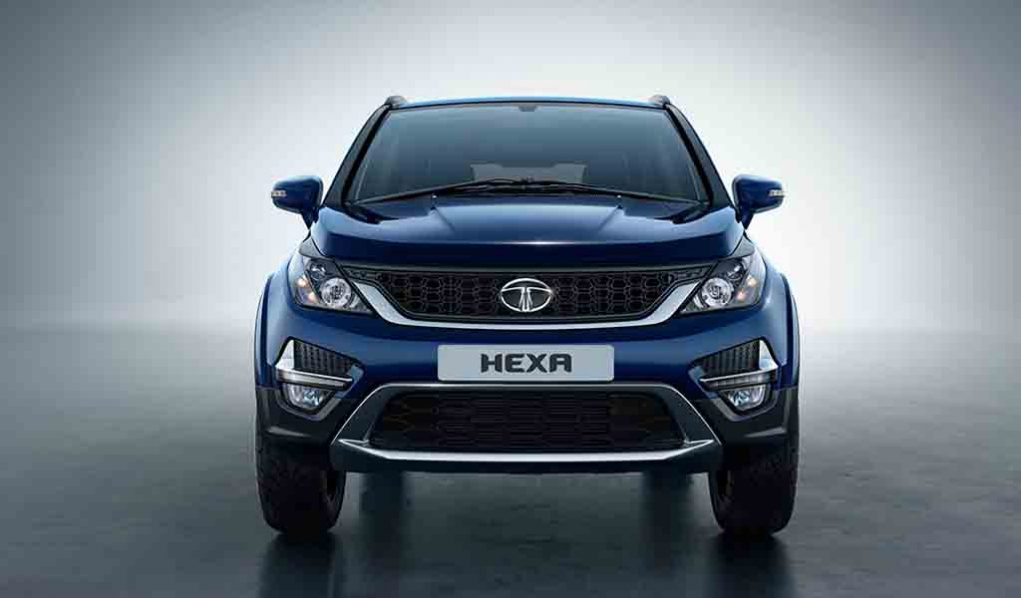 The Tata Hexa is longer and wider than the Innova Crysta, while the latter one is taller than the Tata vehicle by just 4 mm. Tata Hexa comes with 100 mm of extra wheelbase, which means extra room for the occupants inside the cabin when compared to the premium benchmark MPV. The middle seat occupants get foldable tables and cup holders, arm rests. The cabin also gets roof illumination with LED ambient lighting. Overall, the interior feels premium with so many features and airy with large glass area.

The Tata Hexa, on the other side of the spectrum, also offers premium features and feel to the occupants inside the cabin. The car sports multi-function steering wheel, dual pod instrument cluster with a TFT display. The piano black finished centre console gets a touchscreen infotainment system and the blackened theme makes the cabin sporty.

It gets 6 captain seats inside the cabin. The Hexa sports ambient lighting as well. Getting 100 mm longer wheelbase than the Toyota Innova Tata Hexa offers more room for the occupants. Both the cars come with enough room for the occupants, while the feature packed interiors offer premium experience with comfort. We would say the Hexa leads features wise with the Juke Car App, Tata Smart Remote and Smart Manual providing interactive digital manual, Emergency assist and service booking through Service Connect, 10-speaker JBL audio system with 320 Watt DSP amplifier and subwoofer, etc.

The Toyota Innova Crysta is powered by a range of GD series engines. The new GD series engines include a 2.4 litre DOHC inline four cylinder 2GD-FTV diesel CRDI BSIV compliant engine, paired with a 5 speed manual gearbox, which generates 150 PS peak power at 3,400 rpm and 343 Nm of peak torque between 1,400 and 2,800 rpm.

The other GD diesel engine is a 2.8 litre 1G-FTV 16V CRDI DOHC diesel engine mated to a 6 speed automatic transmission kicking out 174 PS of peak power at 3400 rpm and 360 Nm of peak torque in between 1200 to 3400 rpm. The Innova Crysta comes with Eco and Power drive modes. Later introduced was a 2.7 litre petrol engine that makes 166 hp of power and 245 Nm of torque. A six speed manual or a six-speed automatic do transmission duties. On the other hand, the Tata Hexa borrows the powertrain from Tata Safari Storme. It is powered by a 2.2 litre four cylinder VARICOR 400 diesel engine paired with a 6 speed manual gearbox and a 6 speed automatic gearbox as option. The engine generates 156.33 PS of peak power at 4,000 rpm and 400 Nm of peak torque in between 1,700 to 2,700 rpm.

The Tata Hexa comes with four driving modes, which are – Dynamic, Automatic, Comfort and Rough Road. The engine is expected to deliver 13 kmpl of fuel economy. On the engine and performance front, the Tata Hexa stays very close to the Toyota Innova Crysta with its better torque amount.

The Toyota Innova Crysta gets price tags ranging between Rs. 13.99 lakh to Rs. 21.19 lakh (ex-showroom, Delhi). On the other hand, the Tata Hexa would be priced between Rs. 12 lakh to Rs. 18 lakh. The Tata Hexa likely to comes with lower pricing, which could become an important factor to fight with some of the base and middle variants of the Crysta. 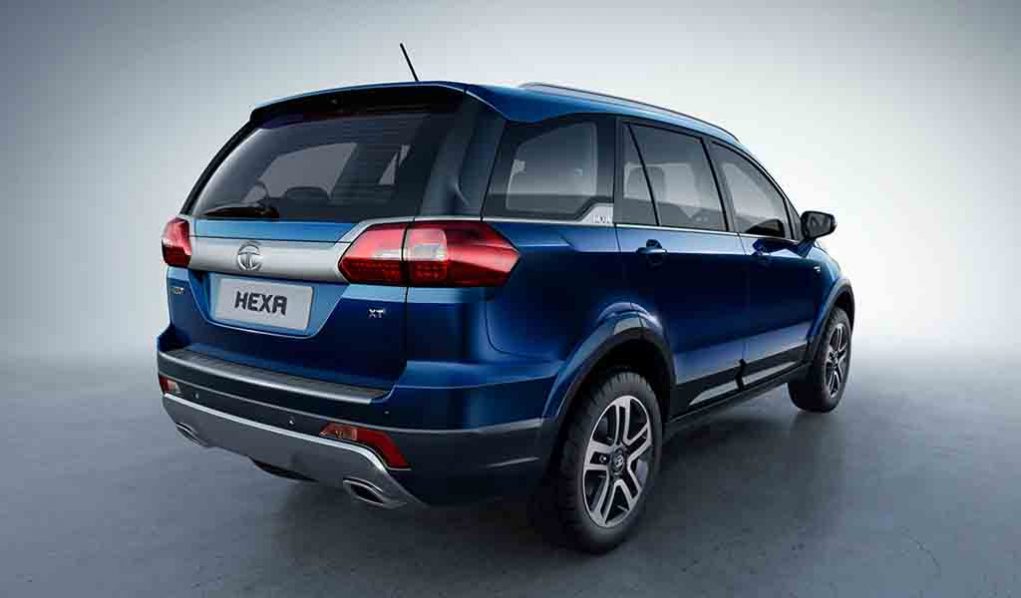 Both the Toyota Innova Crysta and the Tata Hexa looks muscular and bold. The interiors of both the cars offer ample space, premium experience, comfort and loads of features. The Toyota Innova Crysta being a MPV offers seating capacity for more occupants, but the car is styled and powerful in such way, which can easily take on a SUV. Therefore it will be a close fight between these two cars.

The lower price of Tata Hexa might play a vital role in the battle. More comfort and safety features with an aggressive price tag for a crossover that looks as attractive as Hexa is hard to come by any sooner and thus Tata will have a definitive cushion. However, will it be enough for the loyal customer base of Toyota to choose a Tata vehicle? We would have to wait sometime to find out after the crossover’s official market entry. It is going to be a nip-and-tuck battle for prominence we would reckon!