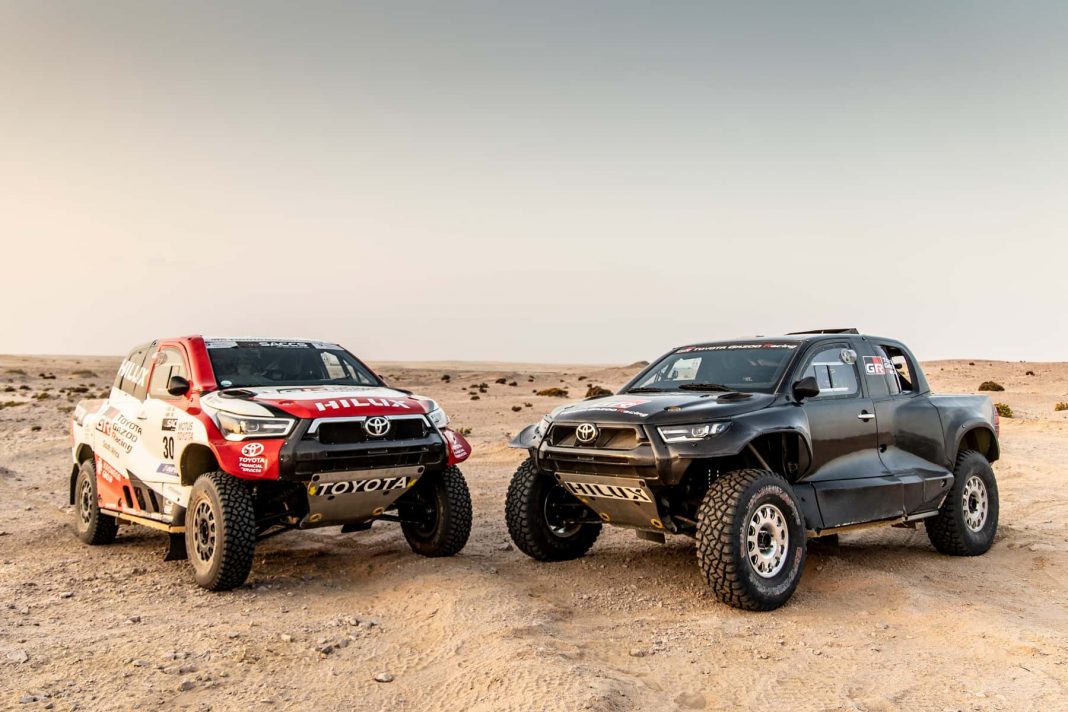 Due to regulation changes for the 2022 Dakar Rally, Toyota Gazoo Racing is developing an updated GR Hilux rally buggies for next year’s event

Toyota Gazoo Racing has released official images of the new Toyota GR DKR Hilux T1+, which will compete in the 2022 Dakar Rally. The event is scheduled to begin on 2nd January 2022 in Saudi Arabia. The truck sports plenty of changes, some of which are easily noticeable, to make it suitable for the challenging course.

The truck gets large 37-inch tyres with a 320mm wide tread, and long-travel suspension (350mm travel). It gets big flared fenders and a massive front skid plate. At the rear, it gets a short pickup bed. Compared to the 2021 Dakar Hilux, the 2022 model only feature minor tweaks to the chassis, mainly to fit the taller suspension and bigger tyres.

The powertrain is different though; the 2022 Toyota GR Hilux Dakar truck draws power from a 3.5-litre, twin-turbo V6 petrol engine. This is a modified version of the one found under the hood of the new Land Cruiser 300 GR-S. The exact power figures haven’t been revealed, but Toyota claims the output is significantly higher than the road-going SUV’s 415 PS and 650 Nm. The truck shown in these official images is just the prototype version. The vehicle is still undergoing testing, and the final production version will debut towards the end of this year. Toyota will send four GR Hilux rally trucks to Dakar next year, comprising four teams with a driver and a navigator each.

Toyota’s team lineup for 2022 will include Nasser Al Attiyah and Mathieu Baumel, who scored a victory in 2019 and finished second in 2021. The other three teams will consist of Giniel de Villiers with navigator Dennis Murphy, Henk Lategan with navigator Brett Cummings, and Shameer Variawa with navigator Danie Stassen. The 2022 Dakar Rally will mark the debut of Audi in the event, with the RS Q E-Tron. This is an electric off-road buggy with a 2.0-litre, turbocharged, inline-4 petrol range extender, essentially making this a hybrid vehicle. The RS Q E-Tron was officially unveiled back in July this year, and then underwent two weeks of testing in Morocco.