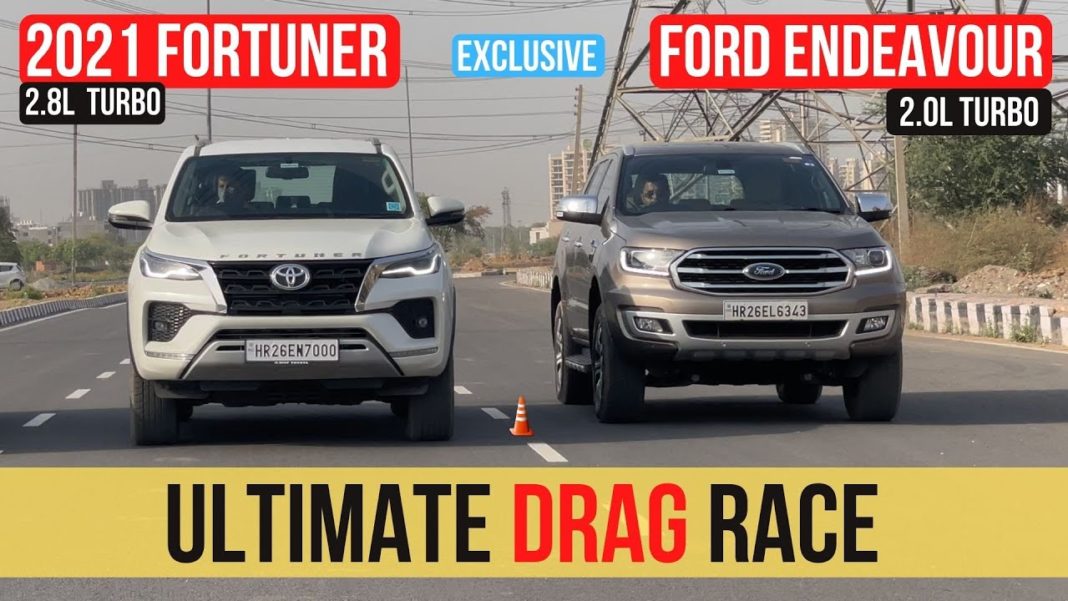 The 2021 Toyota Fortuner was pitted against its arch rival, the Ford Endeavour, in a drag race and the results can be found out in the video linked below

In the latest leg of the comprehensive comparison tests between Toyota Fortuner and its rivals, we have pitted the Japanese its arch-rival Ford Endeavour in a good old fashioned drag race. While the two are off-road focussed SUVs, who would not like to see them go head to head in a drag race? Yes, that’s right, very much everyone likes to see them!

To make the comparison as fair as possible, we have conducted multiple attempts to find an eventual winner and the result might surprise you. The Ford Endeavour derives power from a 2.0-litre four-cylinder turbocharged diesel engine while the Toyota Fortuner uses a bigger 2.8-litre four-pot turbo diesel mill.

While both the seven-seater full-sized SUVs have ample amount of torque, there are a number of factors that had to be considered including the kerb weight. The American SUV delivers a maximum power output of 168 bhp at 3,500 rpm and 420 Nm of peak torque delivered at 2,000 rpm using the EcoBlue engine.

The powertrain is hooked with only a ten-speed automatic transmission sending power to the rear axle as standard or all four wheels through an AWD system optionally. On the other hand, the 2.8-litre GD series engine in the Toyota Fortuner 201 bhp at 3,400 rpm and 420 Nm of peak torque at 1,400 rpm when coupled with a six-speed manual transmission.

In the six-speed torque converter automatic variants, the same engine delivers 201 bhp at 3,000 rpm and 500 Nm of peak torque at 1,600 rpm, and it transfers power to all the four wheels as an option. In terms of raw numbers, the Fortuner clearly has the advantage by being 33 bhp more powerful but did the Endeavour spring up a surprise after all?

To know more, check the link above and do not miss out on the whole series of videos where we compare the 2021 Toyota Fortuner against its main rivals Ford Endeavour and MG Gloster. If you’re a prospective buyer, our exclusive videos will definitely guide you towards making the right decision!