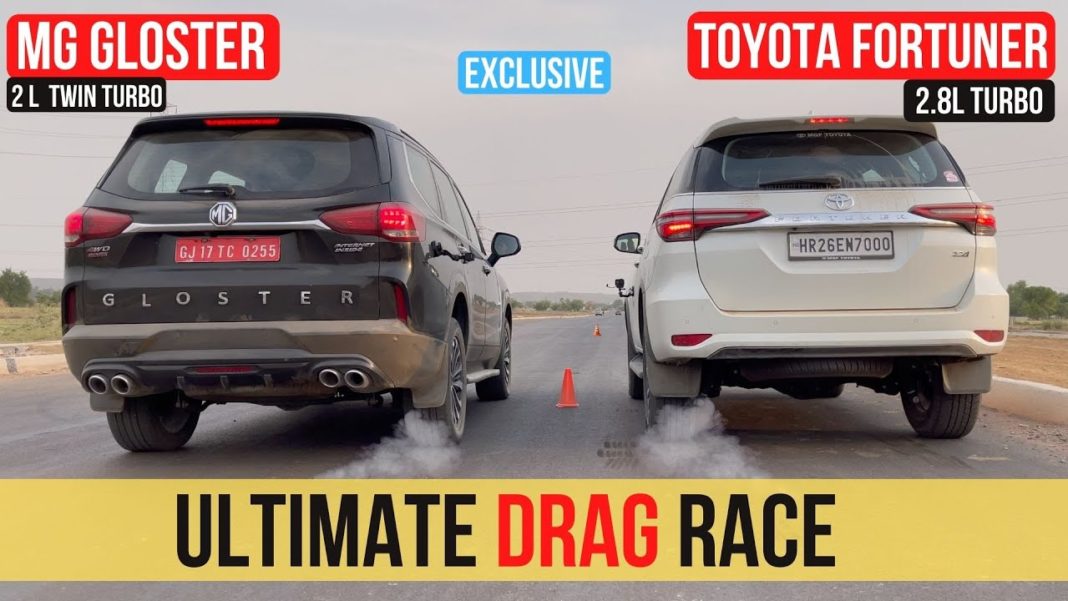 The 2021 Toyota Fortuner goes toe-to-toe against one of its main rivals, the MG Gloster, in a drag race; check out the video linked below for this exciting encounter

Toyota Kirloskar Motor (TKM) introduced the facelifted Fortuner earlier this year with a host of visual and interior changes while the diesel engine was uprated. We have been conducting a series of tests in recent weeks as we pitted the 2021 Toyota Fortuner against Ford Endeavour and MG Gloster to find out which one holds the edge in the segment in terms of performance as well as fuel efficiency.

In the video linked below, the 2021 Toyota Fortuner goes up against MG Gloster in a professionally conducted drag race. Just as with any other drag race, a host of phenomenon is involved in deciding who comes on top at the end of the line. It is worth noting that the MG Gloster has the biggest proportions in the segment in many cases.

In India, the MG Gloster is sold only with a 2.0-litre diesel engine in single turbo and twin turbo configurations. The Toyota Fortuner, on the other hand, can be had with a 2.7-litre petrol or a 2.8-litre diesel engine. The MG Gloster is priced between Rs. 29.97 lakh for the entry-level trim and it goes all the way up to Rs. 35.59 lakh (ex-showroom) for the range-topping model.

Sold in Super, Smart, Sharp and Savvy trims, the MG Gloster can be bought as either a six-seater or a seven-seater. The 2.0-litre four-cylinder turbocharged diesel engine pumps out 163 bhp and 375 Nm in its single turbo specification but the twin-turbo model with more power and torque was part of the drag race against the Toyota Fortuner.

It kicks out 218 bhp and 480 Nm and is linked with an eight-speed torque converter automatic transmission sending power through an on-demand 4WD system with selectable drive modes. In comparison, the Toyota Fortuner uses a 2.8-litre diesel motor developing 201 bhp at 3,400 rpm and 420 Nm of peak torque at 1,400 rpm in its six-speed MT trim.

When paired with a six-speed AT, the engine produces 201 bhp at 3,000 rpm and 500 Nm of peak torque at 1,600 rpm. Both rear-wheel-drive and all-wheel-drive configurations are offered in both the transmission choices. The Fortuner currently costs between Rs. 30.34 lakh and Rs. 37.79 lakh (all prices, ex-showroom).