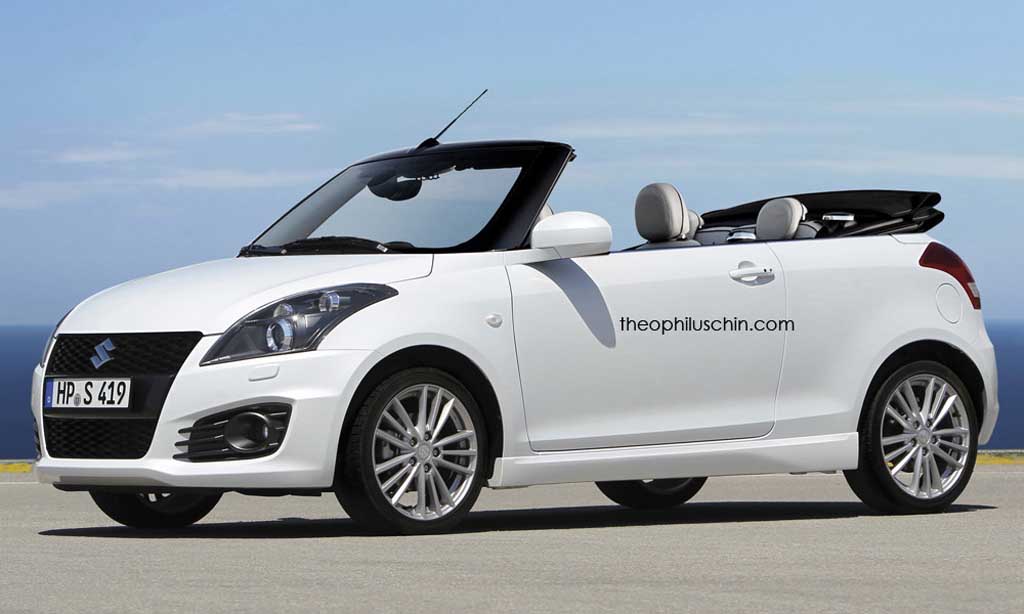 Maruti Suzuki is certainly the common man’s car brand in India, and the Swift from the Indo Japanese automaker has been ruling the compact hatchback segment for quite long time. Although Maruti Suzuki doesn’t sell any convertible variant of the model, but automotive graphic artist Theophilus Chin has imagined and therefore rendered a Cabrio Maruti Suzuki Swift, with a retractable top.

Although we have seen mini convertibles like Mini Cooper Convertible and Volkswagen Beetle Convertible, but the Maruti Suzuki Swift can become a lot cheaper alternative of those cars if produced. The rendering is based on the Swift Sport. The exterior of the Suzuki Sport remains unchanged except the roof part. A retractable top can be seen folded at the rear.

Suzuki Swift Sport gets a 1.6 litre four cylinder VVT petrol engine under the hood as its power source. This engine gets mated to a 6 speed manual gearbox and churns out 136 PS of peak power and 160 Nm of peak torque. It also gets an efficient CVT transmission with 7 speed manual mode and paddle shifters. The sporty compact hatchback comes with ALLGRIP AWD system, through which power is sent to all the four wheels. Suzuki Swift can reach 100 kmph from standstill position in 8.7 seconds, while the convertible might take a few more seconds, due to the heavier roof retracting system.

Although Suzuki hasn’t revealed any plan to introduce a Cabrio version of the popular hatchback, but if it does, it will surely be the most affordable convertible hatchback in the world. Suzuki Sport was first introduced in 2012. Dimensionally the car sports 3890 mm of length, which is 177 mm longer than the Mini Cooper S. The 2430 mm of wheelbase of the Suzuki Sport is shorter than the Mini Cooper S albeit. The Japanese automaker introduced an updated version two years, which received several cosmetic updates.