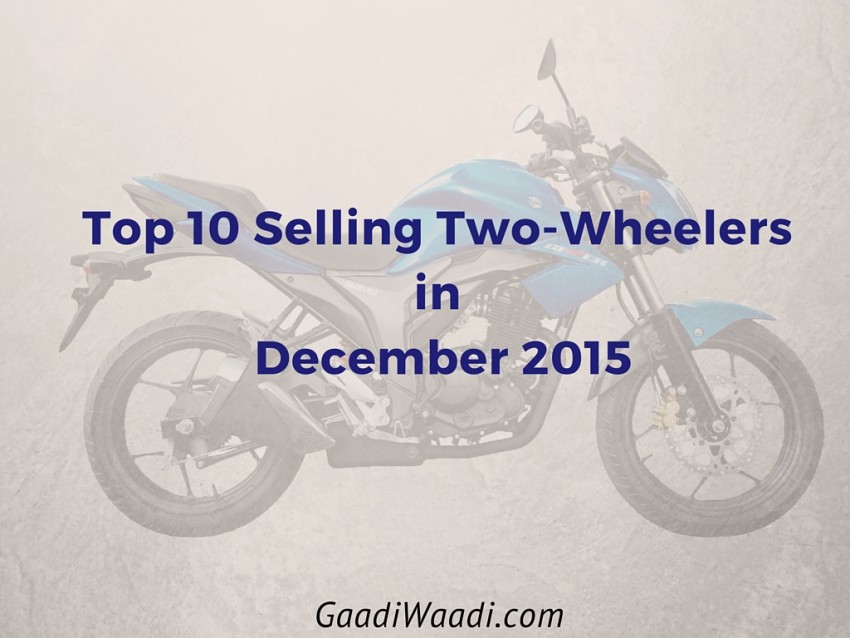 The unassailable leader of the Indian two wheeler industry proved its dominance once again as Hero has five of its motorcycles in the top ten selling list for December 2015. No changes at the top as Hero MotoCorp’s all-time best selling Splendor remains as the number one motorcycle by ending the year with an astonishing 1,84,856 units.

The next on the top ten two-wheeler selling lists has Honda Activa coming second behind the Splendor. The Japanese motorcycle manufacturer has retailed 1,74, 154 units of the highly desirable Activa which is so good to ride on congested traffic jams and also in long drives with ease.

Slotting in at third, the 97.2cc Hero HF Deluxe has been sold for 93,451 units in December 2015 with more customers coming in from the rural and Sub-urban parts of the country as ever because of the affordable price range. Standing in at fourth is the ultimate load bearer in the rural provinces of India, the TVS XL Super. The Indian two-wheeler maker has managed to garner 56,521 new customers with the help of the ever-sustained popularity of the TVS XL Super. At the midway part of the sales table comes the 100cc motorcycle from Hero MotoCorp, the Passion four-stroke bike largely benefited by the Pro facelift last year. About 55,765 units have been sold in the ending month of 2015.

Just behind the Passion is another Hero product with the Maestro. The Indian two-wheeler giant has gathered sales of 52,084 units just in December replicating its strong figures throughout the year. Coming at seven is the second product on the top ten list from Honda, the CB Shine, as 51,047 new vehicles found new customers in December 2015 with a firm Y-O-Y growth.

Eight position has been occupied by another Hero two-wheeler with the Glamour. At a total of 48,748 units the 125cc Glamour bike has proved its steady selling capabilities once again. The penultimate position has been snatched by TVS Jupiter scooter by grooping a total units of 47,217 by the end of December 2015. At the very bottom is the most popular commuter motorcycle from Bajaj, the CT. Within 100 days of its launch, about 1.6 lakh units of the Bajaj CT 100 were retailed by July 2015 and at the end of December about 34,480 units were sold.