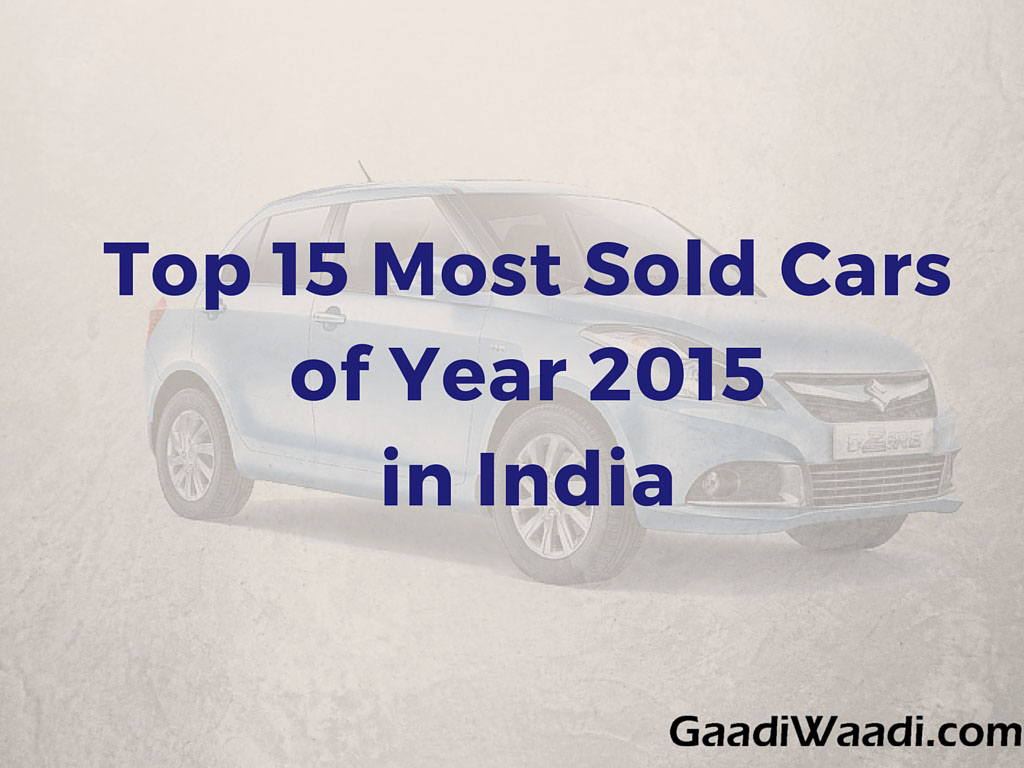 Of the Top 15 Most Sold Cars of 2015 in Indian market, Maruti Suzuki has been the most dominant company as widely expected by having seven cars in the sales chart. It posted a record sales of 1.4 million units in domestic and overseas markets in 2015. The top four positions have been sealed by the largest car manufacturer in the country with Alto heading the sales table ahead of the Swift Dzire sedan, the Swift hatchback and the Wagon-R hatchback.

Following the Indo-Japanese alliance is the country’s largest exporter of passenger vehicles, Hyundai. The Indian arm of the South Korean company has Four of its best-selling models in the Top 15 Most Sold Cars of 2015 in India with the premium hatchback Elite i20 leading the way ahead of the Grand i10, Xcent and the entry-level small car Eon.

Mahindra has one of its familiar faces on the list with the Bolero. With Honda making its presence felt because of City and Amaze sedans, another Japanese manufacturer making to the sales chart for the year 2015 is Toyota with its ace product, the Innova.

Maruti Suzuki Alto has long been a benchmark in the entry-level small car segment by breaking records after records every year. The year 2015 proved to be yet another auspicious term as the it achieved a new landmark by becoming the best selling car in India after surpassing the iconic small hatchback Maruti 800.

The company launched a special edition called Alto K10 Urbano to captivate more customers during the festival season as well. The affordability, high fuel economy combined with the low cost of ownership were pivotal in accomplishing a new milestone year-on-year as 2,72,096 units were sold. The class-leading car Alto800 could get a facelift this year with improved fuel efficiency, upmarket interior and revised exterior. 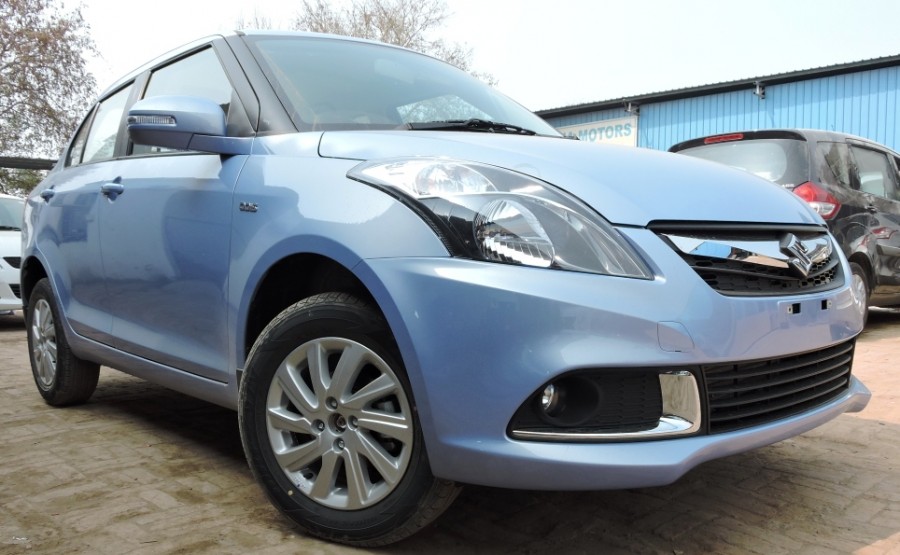 Behind the Alto is the leader of the entry-level compact sedan, the Swift Dzire. It received a facelift on February 2015 with minor exterior changes and more crucially the 1.2-litre petrol and 1.3-litre diesel engines were tweaked to provide an increase in mileage.

It certainly paid dividends as the Dzire sedan averaged a monthly sale of 19,000 units and closed number with 2,33,570 cars being sold .

The country’s favourite hatchback has enjoyed yet another successful year in 2015 as much as its sedan sibling with a total of 2,06,924 until sold. Whilst Swift is still the torch-bearer in its division, some of its customers have opted to go with the Baleno premium hatchback ever since it was launched late October. Since then, the Swift’s production has been relaxed a bit to make way for the growing demands of Baleno.

The second premium offering from Maruti Suzuki, Baleno, has only been there two months and thus its real impact has been masked in the sales table. Expect it to be up there in a commanding position on regular basis in 2016.

With the introduction of automatic transmission on the standard Wagon-R and the Stingray models, the tall-riding hatchbacks’ position as the four best selling model has been re-assured. The Wagon-R wrapped up the year 2015 with 1,70,399 units being retailed.

Credits to Maruti for reflecting the success of AMT-equipped Celerio and Alto as the Magneti Marelli-sourced Auto Gear Shift technology has also been installed in the Wagon-R by taking advantage of the head-start the company has had with its affordability.

The Elite i20 has ended up as the best non-Maruti product at fifth by selling for about 1,30,085 units. However, the Elite i20’s reign as highest selling premium hatchback was finally toppled by the Baleno in November 2015 & December – the vehicle’s full-month of sales and more of it is coming in the new year to give the Hyundai a tough time. 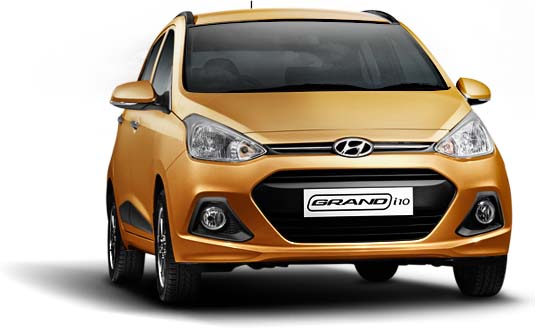 Behind the Elite i20 came the Grand i10 with its exhilarating performance and features by completing 2015 at 1,24,055 units.

It’s of no surprise that Mahindra feature in the top 15 most sold cars of 2015. Slotted in at seventh has been Bolero which acquired an astonishing 88,047 units of sales to become the market’s best-selling SUV.

The Celerio came in at eight on the yearly sales chart by selling 82,955 units.

The Honda City mid-size sedan has seen the introduction of i-VTEC diesel mill a couple of years ago. It was the major kick-up the Japanese company needed for the sedan’s sales and it proved to have worked wonders. As the best-selling car in its segment, it has been sold at 82,912 units and its nearest rival Maruti Ciaz could only manage a third of it.

The Eon entry-level hatchback has been holding the flags up high for the South Korean auto maker ever since launching back in 2011. Despite the enormous success of the quirky Renault Kwid, Hyundai managed to keep the Eon rolling steadily as it rounded up finishing with a cumulative sales figure of 71,820 units in 2015. The Kwid will give a hefty competition to the Eon in 2016 and become a regular top ten contender in the monthly sales. 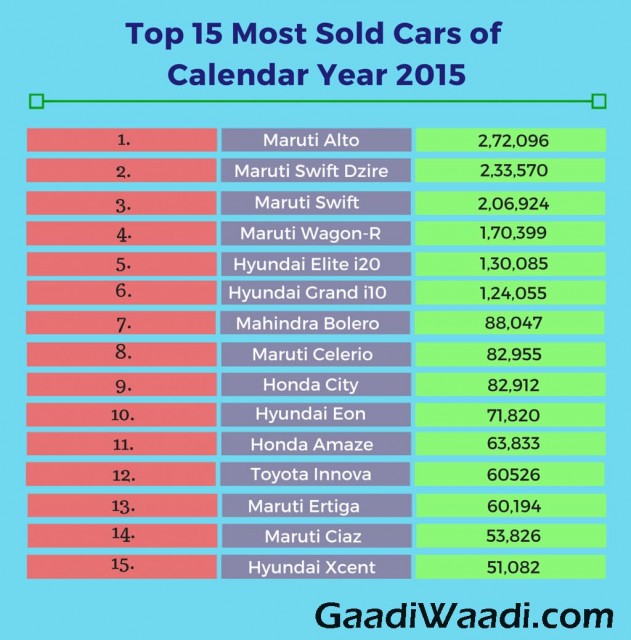 The much-anticipated City facelift could debut in 2016 with subtle cosmetic upgrades and minor reshuffling in features. The Honda Amaze compact sedan finished the year as the 11th best-selling model by selling at 63,833 units. The huge potential of the compact model has ever been shadowed by the mammoth sales of its arch rival the Dzire.

At over 60,000 units, beats Ertiga with a very small margin,  Toyota Innova is the lone soldier for the Japanese auto major’s sales aspirations in the country. With repeated lackluster products, the company has decided to go back to its old roots by unveiling the facelifted version of the MPV in 2016. It will boast a slew of mechanical and design modifications whilst being built on a new ladder-frame chassis redesigned for better overall safety.