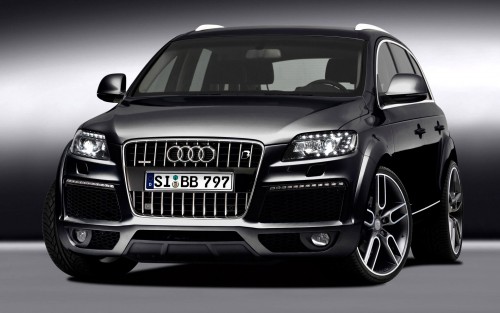 Let’s start with the big daddy of premium SUV in the segment, the SUV in, which Bollywood rolls, the SUV, which has been icon all around the world. It’s been doing pretty well with 110 units shipped last year, but this year it just managed to ship out 93 units. Looks like people are all set to welcome the new Q7 and are waiting for it to come. Meanwhile opportunist will take control of this situation as heavy discounts will be made available on the existing Q7. 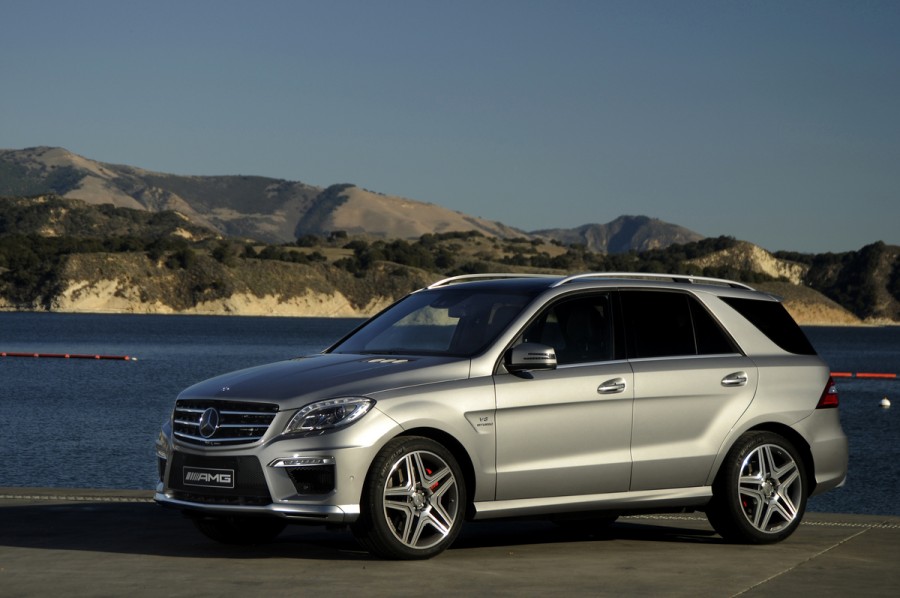 Mercedes M/Gl- Class also is a strong contender in the 60 lakh plus SUV segment and the numbers show. Last year 138 and this year 110 units have been shipped out. Slightly lower, but the news of GL-Class coming in has made customers stand by. Similar case to the Audi Q7. AMG variants along with normal and diesel variant combined, the GL class has stacked up well and is seen Q7 some stiff competition despite a segment lower. Let’s wait and see what the GLS-Class can do 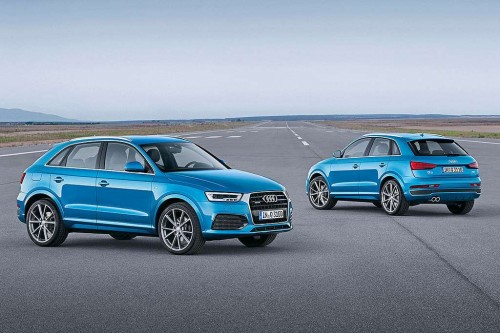 The intensely hyped and most versatile Audi SUV strikes again with good numbers. However, 10 units sold less than last year (140 vs 150) those are decent numbers if they are going every month. Audi banks highly on its SUV as they have caught up with our market very well. Quattro, Audi and SUV, these three words are honey to every premium car buyer in India. 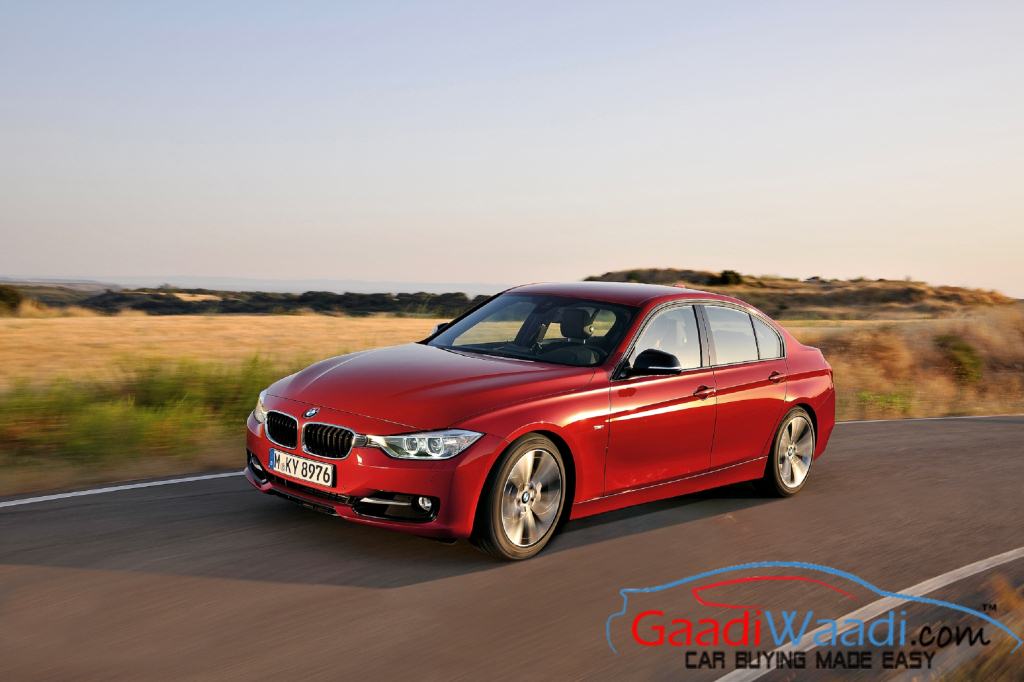 Bavarians are also making serious effort to crack market with their fantastic after sales schemes and support. That’s the reason why we see 142 units sold this year. That number is tiny bit less (150) than last year. Quite impressive, but wait till you hear about the competition of 3-Series and their numbers. 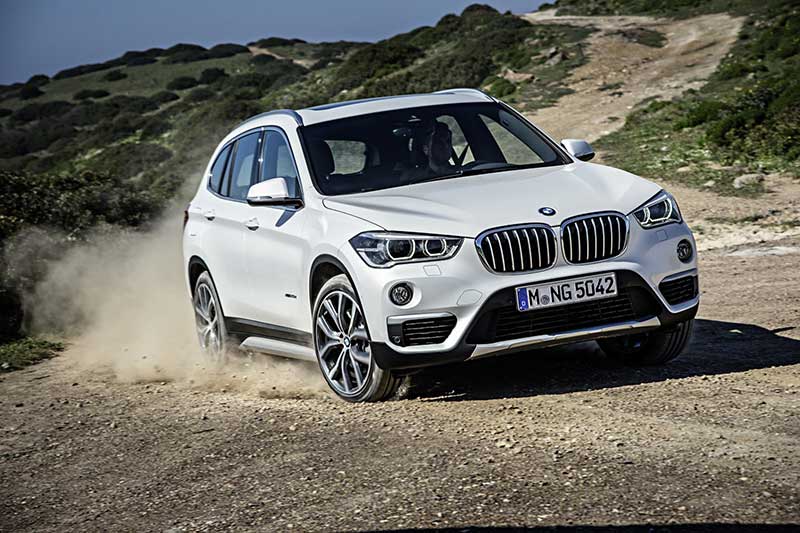 Looks like the Q3 sold a bit less because its competitor, the BMW X1 sold 5 more units than the Q3. Jokes apart, The new refreshed X1 has been doing very well as it very less flaws over the previous version. Better steering, better ride more power and refined engines has helped BMW sell as much as the competition just did. X1 continues to be BMW important products and the new one, which is a front wheel drive model with more practicality and more of SUV in design should help even more. 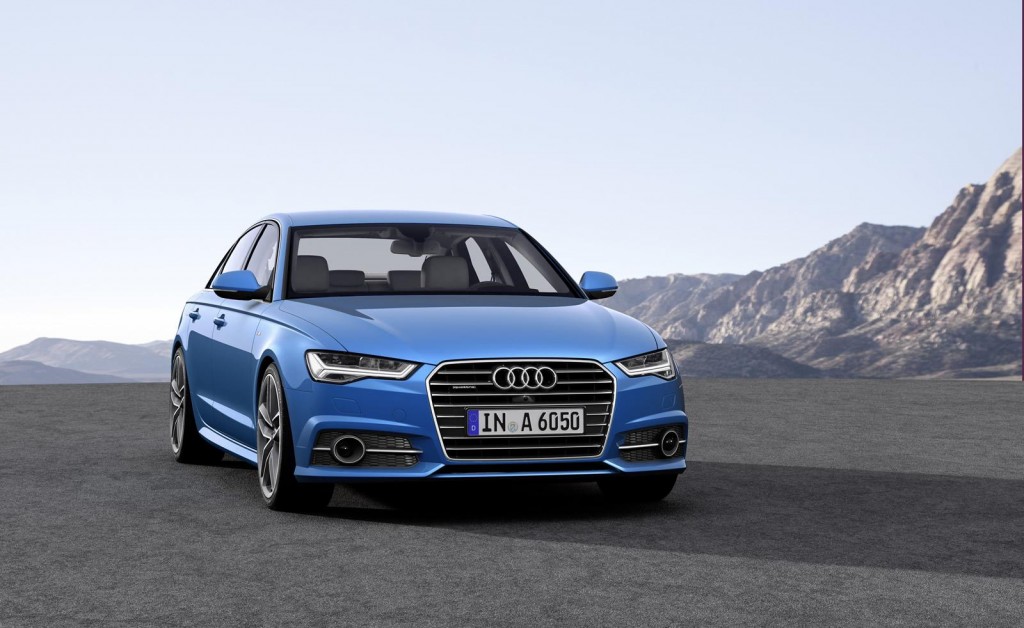 Now this is the fight we all love to see. The Mid-size saloon is the hottest throughout the world and same case follows here in India. While models lower in the stable bring volumes, these models bring volume and cash to the table. Audi A6 recently got diesel and petrol engines revised with more tech, which has made it a properly cool car. We think that’s’ the reason why the sales have gone down a bit, but anything above 200 units is seriously impressive and Audi A6 is surely one impressive car. 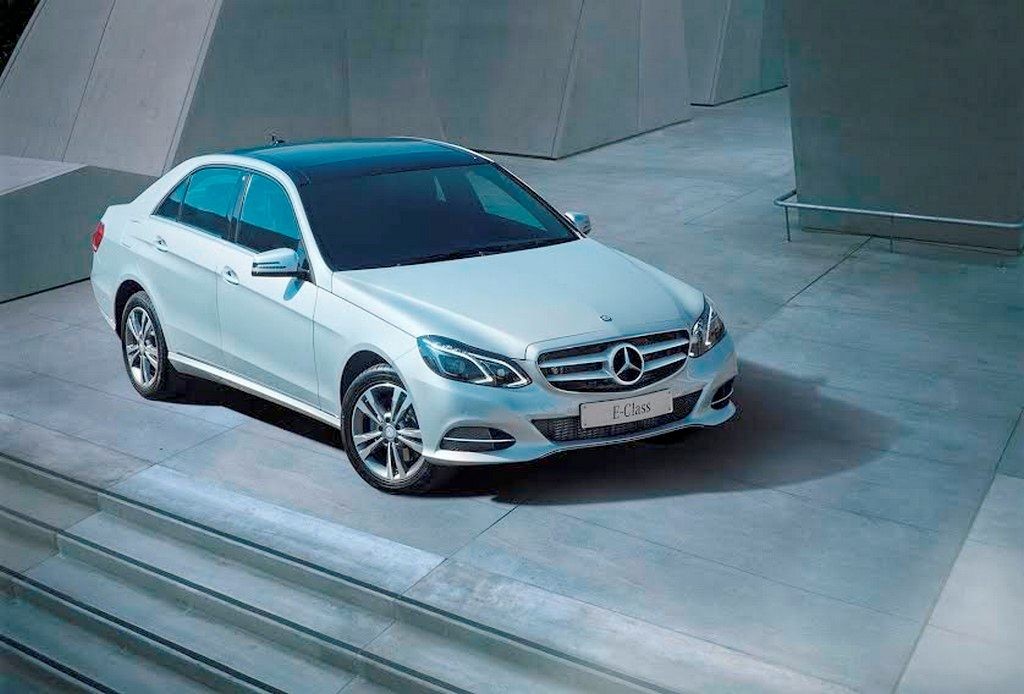 However, the real king of the mid size saloon segment is the Mercedes-Benz E-Class. Best seller worldwide and in India as well. Selling almost 360 units, just 5 units away from 1 unit a day, just kidding, it acquires the number one spot by a substantial margin. However, E-Class sales has gone down 20 units when compared to YoY despite the fact Mercedes just launched a highly equipped variant of the same car. 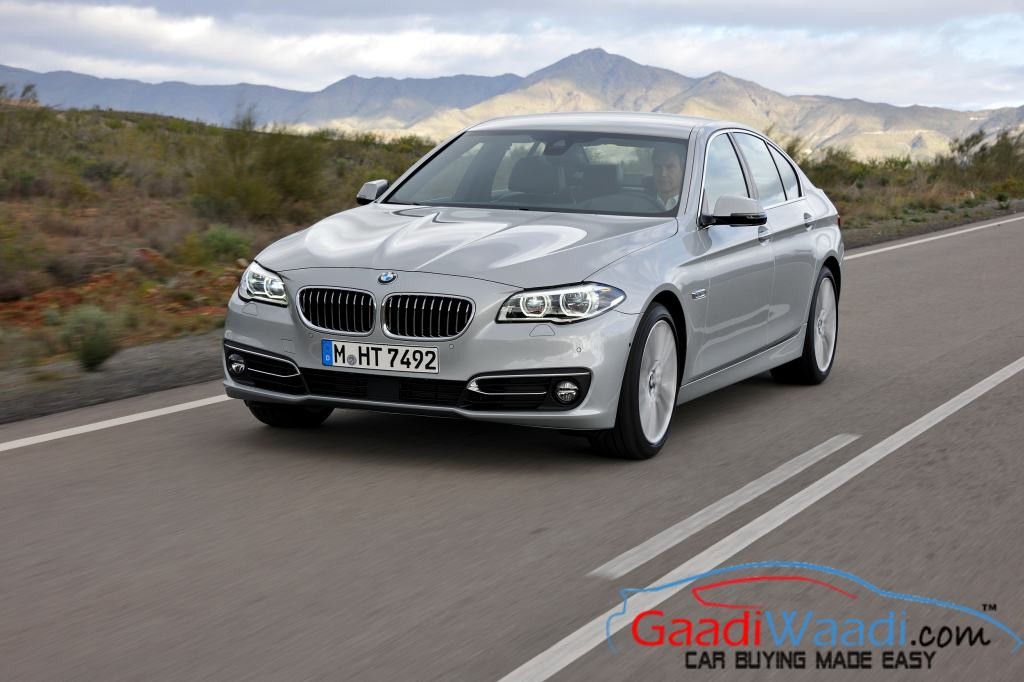 The 5-series also has been doing extremely well given the competition is quite tough as brand perception and loyalty helps. Personally, we too would have the 530D over any other in the segment and that’s why BMW has sold 217 units this year meanwhile, it just sold 230 units. Segment has seen downfall over considering the entry-level original saloons have been available for huge discounts and refreshed variants of those are coming soon too. 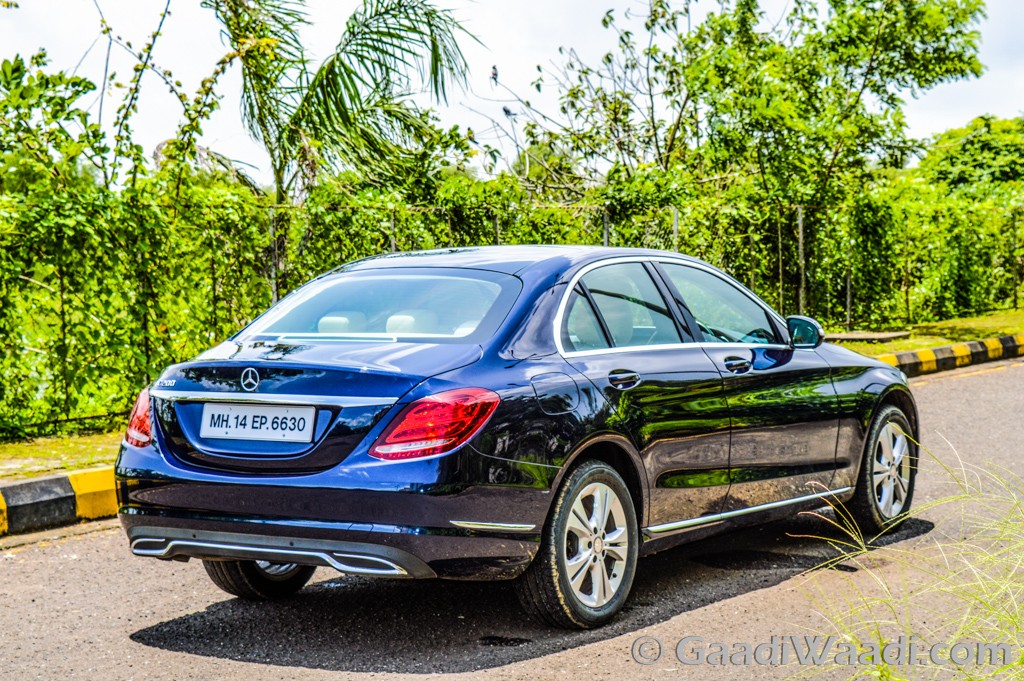 Coming to the meat of the matter. The entry-level saloons may have changed for Audi and Mercedes, but C-Class and Audi A4 battle has been always strong. Numbers show that Mercedes sold 415 units, which 35 less when compared to last year (450 in August 2014). Despite the fact it is the Mercedes best seller, it has seen a bit of downfall because it’s a new car and discounts aren’t as high as the customers want and the competitors offer way more than that. A point, which is proven by the Audi A4. The new one pictured above could be sensational blockbuster as the old car has some flaws and the new one said to be mighty impressive. 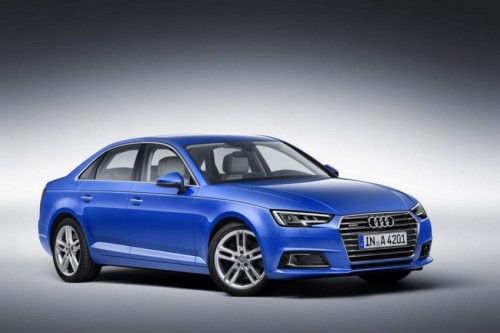 Coming to the Audi A4. The car is the number one selling premium car in India, which has garnered 420 units in August 2015 and is 5 units more than what Audi sold in India (415 units is August 2014) Audi A4 surpasses every single car in the premium sales segment by a good margin, but the competition from the new C-Class is clearly visible as it just managed to win the race.

A total count says that Mercedes-Benz India is still in the lead when it comes to overall sales, which counts the trio’s entire stable. Audi isn’t far behind, but the gap is noticeable. BMW comes third as it does not have the products in the lower half to fuel it sales. Once the new 1-Series, X1 and 3-series come back, it should help BMW to quite an good extent. Overall, manufacturers record a downward in sales as it is about time when the sales increase because the festive season is here. Meanwhile, let’s see most customer out on roads enjoy the best or nothing at all. 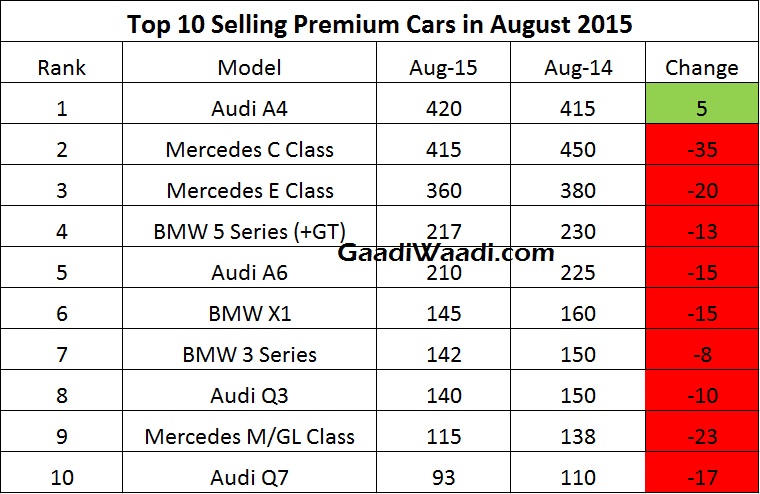