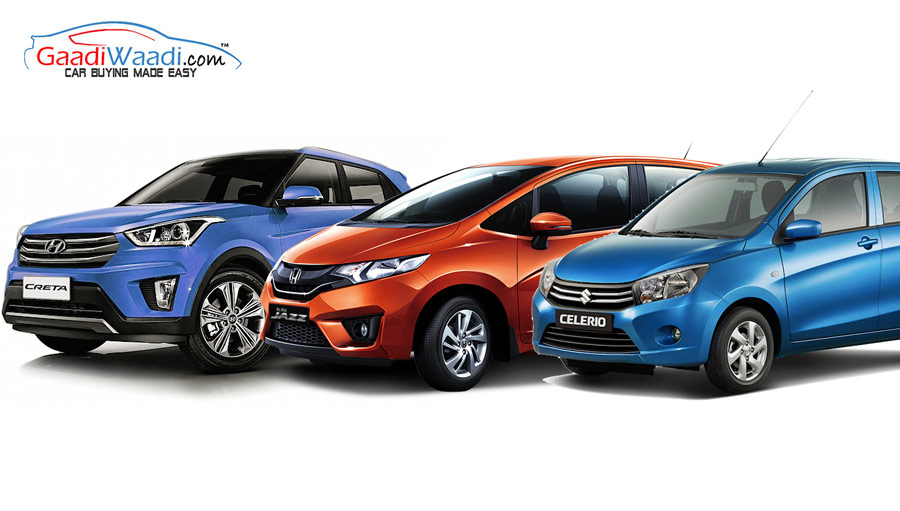 Maruti Suzuki has been the unbeaten leader in terms of sales in the country and in Top 10 selling Cars in July 2015, 6 Out of 10 cars belongs to Maruti Suzuki. From some recent months, there is only slightly changes seen in the ranking of Top 10 car sales list but, this time, 3 car’s disappeared from the list, i.e. Honda Amaze, Honda City & Hyundai Xcent as these cars made way for the July launched All New Honda jazz & Hyundai’s first-ever Crossover ‘Creta’ in India.

Launched on July 8th in India, Honda Jazz took only 22 days to mark its entry in the list of Top 10 Selling Cars in July 2015 as Honda Cars India retails 6,676 units, but Honda City & Amaze disappeared from the list as the production of both cars halted to meet the demand of recently launched Jazz.

Launched on 21st July, Hyundai India successfully dispatched 6,783 units of Creta across the country stuns everyone, with over 20,000 pending bookings, it seems the sales numbers of Creta will increase in coming months. Hyundai Creta beats it’s so-called rival Renault Duster by 5,778 units means only 1,005 units of Duster sold in July 2015, Creta also surpasses Scorpio, XUV500 & Safari by huge margins. 3,381 Scorpio, 3105 XUV500, 3,885 Ecosports, 1,029 Safari and 645 Nissan Terrano sold in July 2015. However things might change in the coming months for Hyundai Creta as Maruti is all set to launch S-cross in India this week which likely to become the Arch rival to Creta.

Launched at Auto Expo last year with AMT transmission, Maruti Celerio is the only car in India, which is available in all fuel options and in AMT as well, it is also runs on the worlds super compact diesel engine weights only 89kg and currently hold the India’s most fuel efficient car titles. Maruti sold 7,784 units of celery as against 6,394 last year in the same month, Celerio registered 22% growth YOY.

Hyundai Elite I20 is the most selling model in Hyundai India portfolio and it helps Hyundai to achieve a good positive growth despite the fact that the sales volume declining day by day of Xcent & Verna in India. Hyundai India sold 10,031 units of Elite I20 in July 2015 and register the huge growth of 530% as only 1,593 units of I20 sold last year.Hyundai Elite I20 holds 5th spot in the list. Maruti Suzuki Wagon R holds 4th Spot in the list for several months, even for years, WagonR’s tall boy design makes it different from all other models and now, is the only tall boy mini hatchback in India. Maruti Suzuki retailed 15,540 units compared to the 11,762 units in the same month last year and registered the growth of 32% YOY.