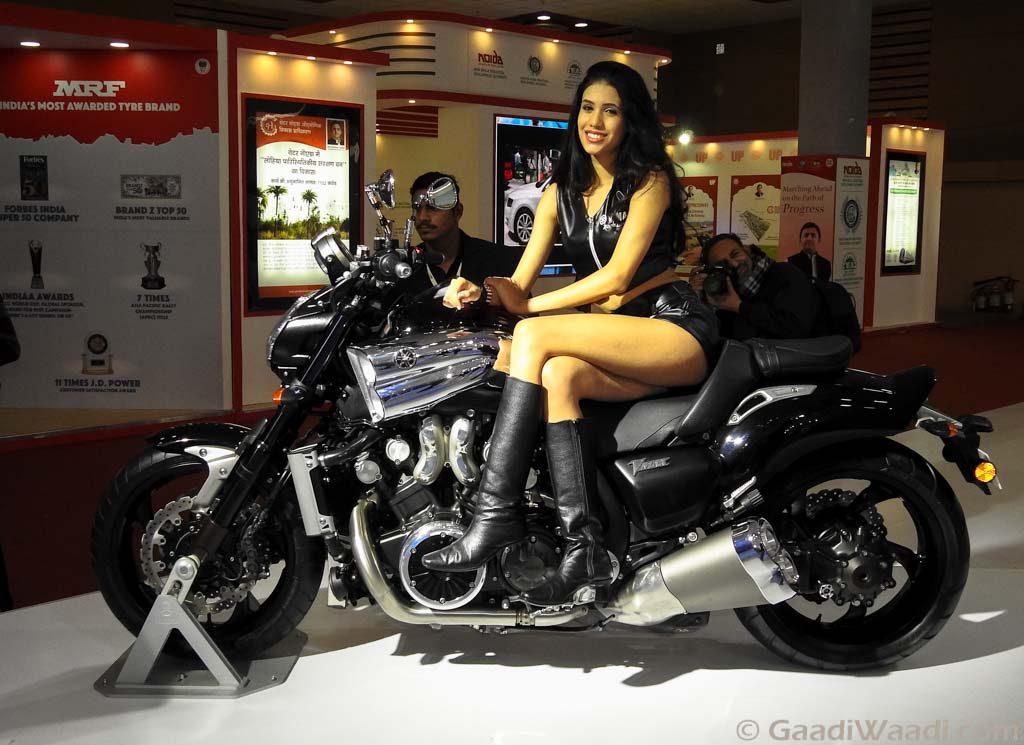 2016 Auto Expo for motorcycles wasn’t entirely something to drool forward too in the beginning, but as the time pass by on the same day and the next day we saw some really interesting bikes taking of their covers for the first or making an Indian debut. These motorcycles are in all shapes and sizes, production, concept or just unveiled for the first time. We narrow down the list for you to tell you that these are the two-wheels you should look out for in the future and on the road soon.

The Hero XF3R concept unveiled at the 2016 Auto Expo stands in-line with the Hastur naked concept with a street-fighter stance and perhaps the most alluring the Indian two-wheeler maker had displayed. Anticipated to be a 300 cc bike despite having a bigger appeal, the Hero XF3R sports cast alloy wheels, unique one-sided swingarm and upside-down forks. The rear sub-frame is reminiscent of the Triumph Daytona 675R due to the red with the regular exhaust dumped in favour of a sporty, up-raised system.

With inputs from Erik Buell Racing, the Dual Mapping read on the bike suggests a double riding mode and one of which could be ‘Sport’. It has a six-speed driveline with wet-multiplate clutch, digital dash and LED lights, dual-channel ABS. etc.

It already won the best concept bike of the 2016 Auto Expo and it did for a reason. This concept is almost production motorcycle and looked outright gothic and one of the purposeful bikes in recent time. The carbon fibre body, the raised tail, the similarity to the Akrapovic exhaust all looked menacing.

The motorcycle had a very sharp front as it tips down and has dual lights to go with the supersport look. TVS says this bike will hit the market in exactly one year, which is great because the last concept made it to production after two years.

The BMW makes Indian debut first time and the motorcycle gauged a lot of attention. The motorcycle is high quality motorcycle and has new technology onboard to make sure it performs best. Twisted engine head, makes exhaust shorter and hence it makes power and torque and exhaust gases are limited too.

Front is left for entirely sucking the air in. Looking great in that silver and white paint scheme expect the motorcycle to come within a year to hit the market.

The futuristic Honda CX02 naked street bike had inverted telescopic suspension and followed the footsteps of the CX-01 concept revealed in the previous edition of the expo, The Concept Cross 02 has been developed entirely by a team of Indian engineers at HRID.

The expected bike actually made it to the pavilion and despite that it was a surprise as Yamaha is known to disappoint it fans admits rumors as well. Not this time, MT-09 actually makes to the Indian shores at 10.2 lakhs ex-showroom Delhi which sounds steep at first when considering the competition.

MT-09 has a legacy worldwide of offering cheap thrills as it the most budget motorcycle in its category worldwide. It is expensive but since its a CBU under 10 lakhs, people who can afford won’t think much before buying this off the shelf.

It did not turn out to be something that we all debated and thought of but it is something that puts a smile on the face. The crossover market in cars is high and now it has filtered down to the two-wheelers as well. Automatic scooter engine with motorcycle inspired chassis and sitting position may be in Honda stable an outright win, but let’s see how the public takes it as it does look cool on paper.

The entry-level American cruisers had been introduced for the Indian market courtesy of UM which has a production facility in Uttarakhand. With simple yet elegant design, the Renegade series’ Sport S featured circular headlamp surrounded by a cowl, curvier fuel tank and an attractive larger speedometer. Launched for Rs. 1.49 lakh (ex-showroom, Delhi), the Renegade Sport S flaunted with matte-finished front forks and exhaust with rear pillion seat covered by a detachable cowl.

Set to be launched sometime later this year, the compact Benelli Tornado Naked T arrived at the Auto Expo following the global unveil at the 2015 EICMA. The peculiar Italian super compact Tornado Naked T bike rivals against the likes of Honda Grom and Kawasaki Z 125 in the overseas markets. It will more likely be made available with 125 cc and 135 cc engines when launched and it’s a mixture motocross racer and a street-going bike.

The 125 cc single-cylinder engine is capable of developing a maximum power output of 11.7 PS and 10 Nm of peak torque. The 135 cc single-cylinder unit develops 12.6 PS maximum power and 10.8 Nm of peak torque. It comes features with USD front fork and rear mono shock suspension, 12-inch multi-spoke alloy wheels with 120/70 front and 130/70 rear tyres and disc brakes up front and rear.

In order to create the top-of-the-line Xtreme 200 S model, Hero put in a lot of effort to bring up its stature to what the name really stands for. For instance, it has rear monoshock suspension and comes with ABS. The rear-end has been lifted slightly up to adhere with the modern 200 cc category motorcycle appeal.

Built on diamond-type chassis, it features LED lights, air vents in the front cowl, updated instrument panel and comes powered by an air cooled, single cylinder, four-stroke, 200 cc engine that is capable of pumping out a maximum power of 18.6 PS at 8500 rpm and 17.2 Nm of peak torque at 6000 rpm. The motor is mated to a five-speed manual transmission.

The motorcycle stole every enthusiast heart away in the silver color and golden suspension color units. The retro cafe racer in race version with that half fairing and single headlight and extremely high quality build is truly drool worthy.

Coming with the new 1200cc engine making 112 Nm of torque and producing over 30-40% more power than before in the racing version means it is going to spectacular to ride given the chassis is revised too.