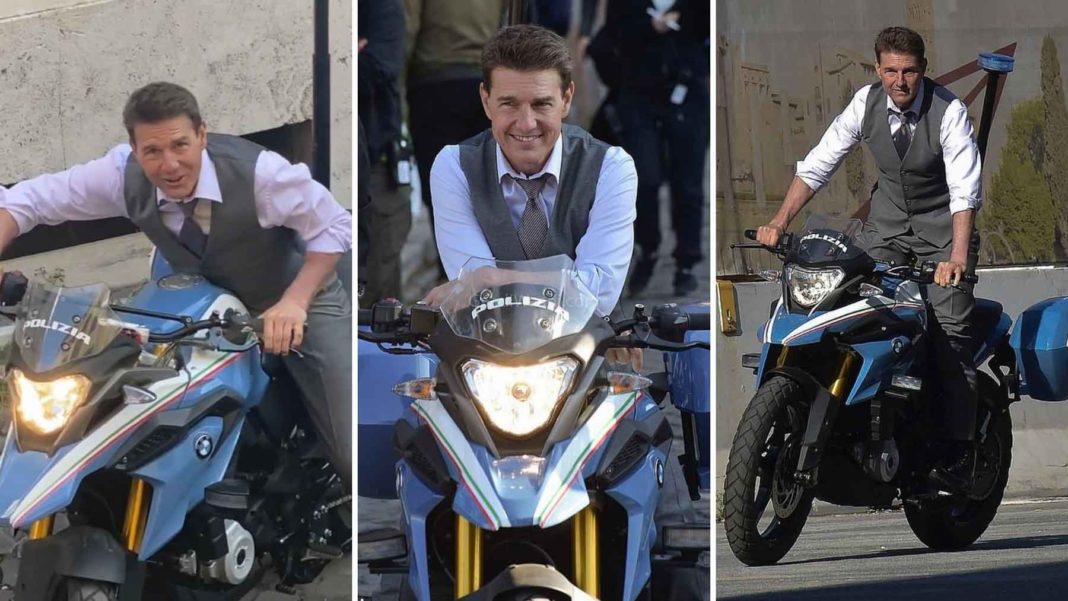 The Hollywood actor Tom Cruise is known for being a daredevil as he has performed astonishing stunts without a stunt double in many movies. His adoration for motorcycles, cars and even jet planes has been well-documented. Coincidentally enough, his Mission Impossible series gets brimmed with action packed larger-than-life sequences and the upcoming iteration looks to feature BMW G310GS.

Just as Audis for the Iron Man and James Bond with classic Astons, the Mission Impossible movies feature BMW vehicles. Tom Cruise has recently been spotted riding a G310 GS Italian Polizei bike and it will be interesting to hear its exhaust note in the movie as Hollywood flicks definitely does something extraordinary, just like the R9T sounded like an S1000RR.

The G310 GS along with its naked streetfighter sibling, the G310R, has become a massive success story for BMW Motorrad. They are exported from India and produced at TVS Motor Company’s manufacturing facility in Hosur. Both the entry-level Bimmers raised eyebrows when they entered the Indian market with exorbitant price tags a few years ago.

However, in the due course, the German brand appears to have learned a thing or two about the domestic market and its customers. Thus, the BSVI compliant BMW G310R and G310 GS are priced competitively mainly against the KTM 390 Adventure and KTM 390 Duke respectively. The 2020 G310 GS is offered in three colour schemes namely Rallye, 40 Years GS edition and Polar White.

The Rallye derives inspiration from the bigger R1250 GS with Rallye braking up front, blue coloured beak and tank complementing the black base colour with red trellis frame. The 40 Years GS edition sports black and yellow contrast elements as in the F750GS, F850GS and R1250GS in their global trim. The Polar White features white base colour and grey tank panels.