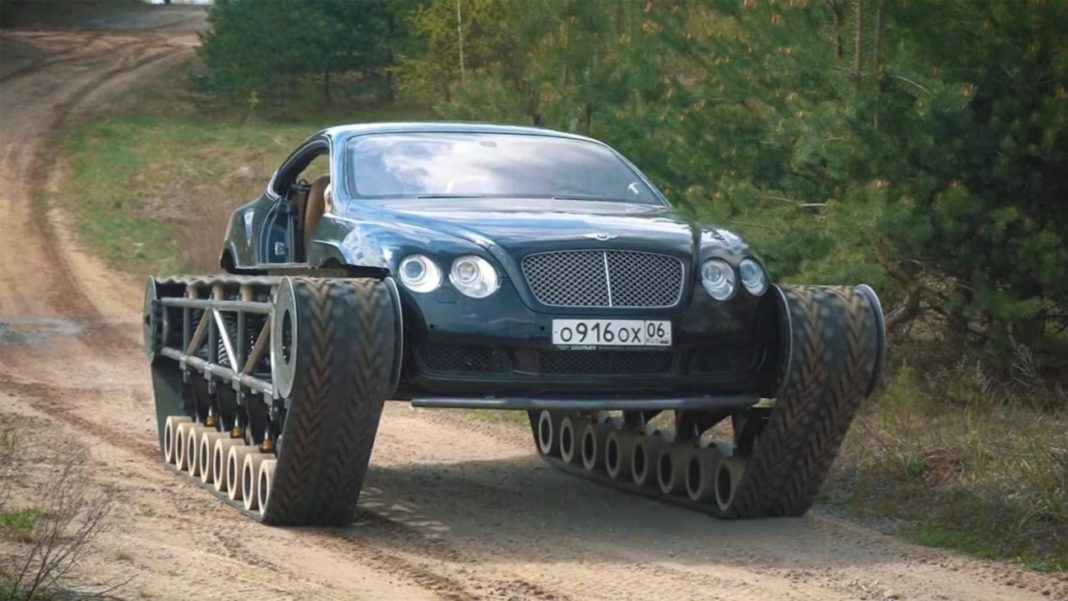 Car customizers in Russia have done the unimaginable by slapping on a set of tank tracks to an ultra-luxurious Bentley!

We, at Gaadiwaadi, are regular with featuring some really tastefully modified cars. However, every once in a while, we come across a modification that completely blows us away. The latest modified example to make it to our website is another such out-of-the-world piece. While this project is yet to reach completion, the modified Bentley with tank tracks has already left quite an impression on us.

Done up by Russian car customizers, the insane-looking project involves a Bentley Continental GT that has lost its wheels (and many other components) to adopt a set of tank tracks. The video that has been posted by these guys even shows the vehicle in working condition.

Dubbed U`ltratank, this modified Bentley Continental GT can easily handle some steep gradients and easily drive on an off-road course. That said, there is still some work left to be done on the vehicle.

For example, there isn’t enough tension on the treads, which leads to the tracks slipping off the vehicle in hard corners. Of course, putting them back in their place is quite a task.

There are even some other minor flaws. For instance, the modified Bentley Continental GT is yet to regain its doors, which means the users are subjected to dust and debris coming inside the vehicle on the off-road courses. Even the brake pedal doesn’t seem to work properly, thereby making it difficult to haul down the beast.

However, all said and done, the video goes on to show that nothing is really impossible in the world of automobiles. We just can’t wait to lay our eyes on the completed project. This is definitely going to be one modified Bentley that will be remembered for ages to come.