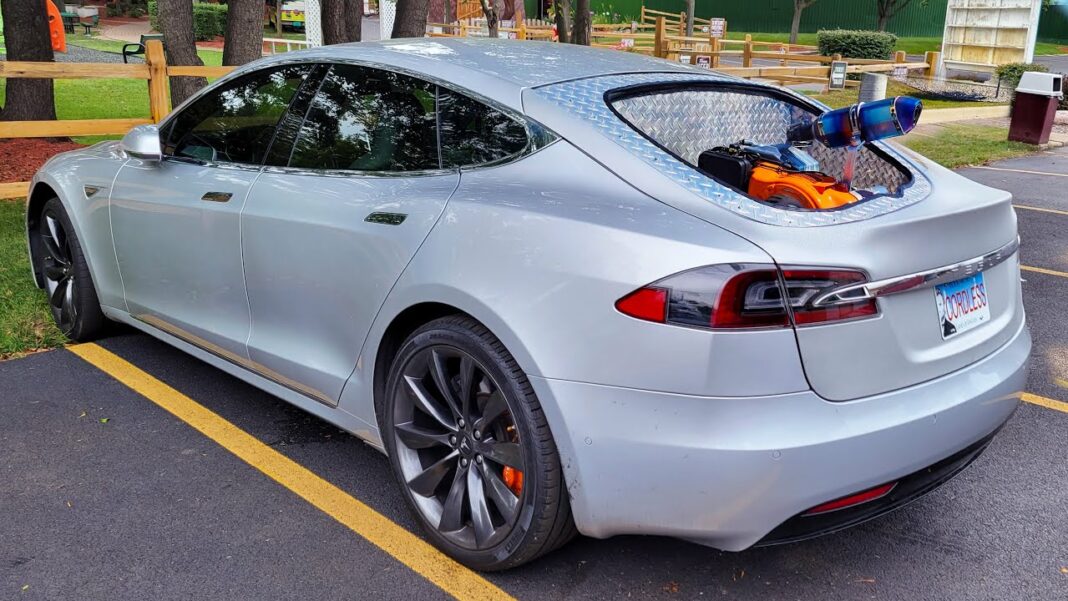 This Tesla Model S is fitted with an on-board generator and to test it out, Matt Mikka took it on a long road trip. Did he come out smiling in the end? Find out!

If you have never seen it, we highly recommend you to check out the Warped Perception Youtube channel for some rather uncommon experiments. Matt Mikka recently fitted three mini jet engines to his Tesla Model S as he thought of improving acceleration, which apparently the Model S is already good at. Being an electric car, the owner does have to spend time to charge it.

He even finds that unconventional probably? He went about and found a solution and fitted an on-board generator and to test out his experiment, he took the Model S on a long road trip. He has used a 400 cc single-cylinder engine, which is good enough to produce around 13 hp. The trip was even longer than he planned as he did 1,800 miles totally (nearly 2,900 km).

He did succeed in his mission of not pulling over to charge his Tesla Model S as he used the tiny engine for seven days. But there are some caveats as the engine ran loud continuously and it did put him in a spot of bother where he stayed at night. This was because it was charging in the entirety of the long trip while now drawing power from the grid.

In addition, since the engine/generator was small in size, he could not do the desired high speeds and had to stop by the sides to let his Tesla Model S charge with 2 per cent charge left in the battery. He was stopped by the police for driving too slowly due to the low charge state and simply that the on-board generator did not allow him to.

Despite the experiment managing to achieve the desired result, Mikka wanted to perfect this with a much improved on-board charging station with a better performing generator.

With more such experiments, this could lead on to an electric car without having to charge at a grid station or is it just silly to try on? We do believe he is on to something with this, don’t you?