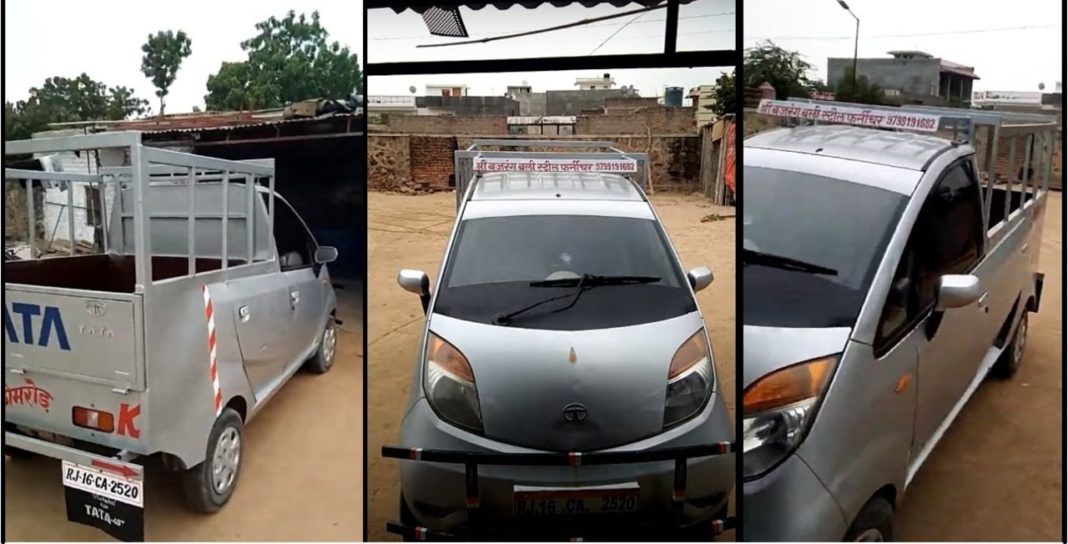 Check out this custom-built pickup truck, based on a Tata Nano, which was the most affordable passenger car in the world back in its day

Modified cars don’t just include performance enhancements or visual upgrades, they also include vehicles that have undergone some serious rework that changes its genre! Over the years, we’ve seen plenty of people turn their regular family cars into workhorses. Here we have another such example, based on a Tata Nano.

This particular Nano has been extensively customised, with heavy modifications done to the back portion of the car. The C-pillar has been deleted, along with half of the roof, to make way for the bed. Interestingly, the rear doors haven’t been removed; rather they’ve been welded on to the body. The front portion of the car, i.e., everything ahead of the B-pillar, remains in stock condition.

As the Nano is a rear-engined and rear-wheel-drive car, the loading bay in the bed is quite high. There is also a hatch in the centre of the floor of the bed, which is probably there to allow access into the engine bay. The wheelbase remains unchanged, but there’s a larger overhang at the rear now. At the front, we also see the addition of bull bars on to the bumper.

The video above, posted by Pukhraj Lomror on his YouTube channel, gives us a brief walkaround of this modified Tata Nano. This is a surprisingly clean mod job, but sadly, it is completely illegal as well. The Nano was underpinned by a compact monocoque chassis, in which the frame consists of the body of the car.

Thus, even the roof is an essential part of the chassis, and removing half of it compromises the structural integrity of the vehicle. The Government of India has ruled all such modification as illegal, and if caught by the authorities on the road, the owner would be fined and the vehicle would be seized.

The engine on the Tata Nano was a 624cc twin-cylinder petrol motor, capable of generating 38 PS and 51 Nm. It could be had with either a 5-speed manual or a 5-speed AMT. Back when it was first introduced in 2009, the Nano was the most affordable car in the entire world. Sadly, it didn’t perform as well as the company had hoped, with particularly disappointing sales in 2019, following which the car was discontinued in India.