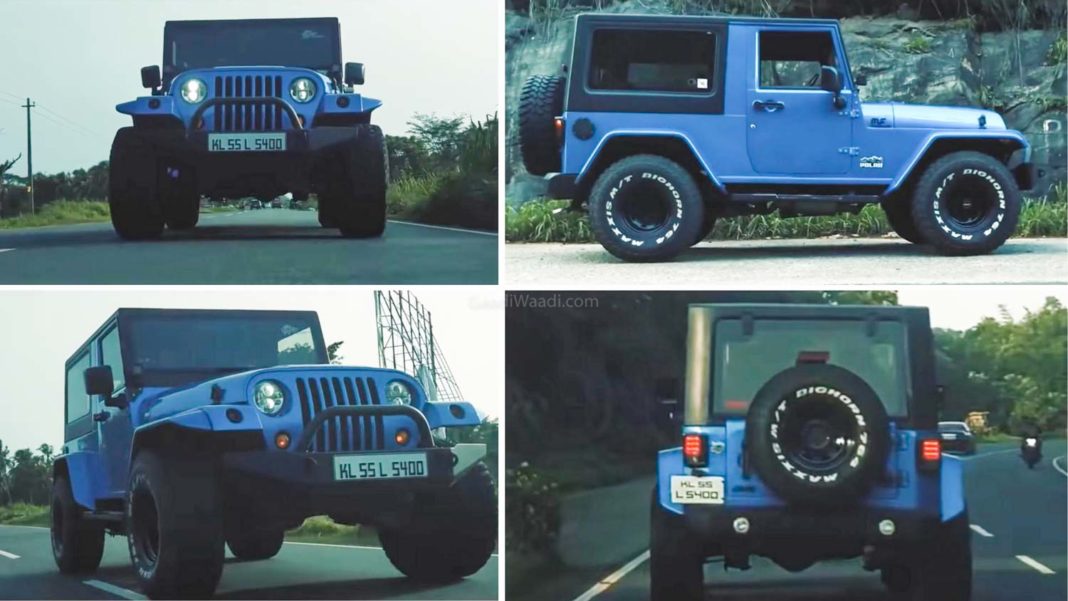 The Mahindra Thar came equipped with a 2.5-litre four-cylinder diesel engine that generated 106 PS of max power along with 247 Nm of peak torque

Originally launched in the country back in 2010, the Thar was brought in to fill the void that its predecessor, the MM540 had left in Mahindra & Mahindra’s line-up. Since the Mahindra Thar has been heavily inspired from the Jeep CJ, the former is ought to have similarities with the latter’s successor, the Jeep Wrangler.

A few changes to the Mahindra Thar to make it look more premium, and the end result is a mini Jeep Wrangler clone. That is exactly what’s done by Danish to his Mahindra Thar, which he has named ‘BlueBull’. All the external styling of this tastefully modified Mahindra Thar has been recorded and uploaded on YouTube by DN Records.

The modifications made to this Thar include an azure blue paint scheme, an aftermarket offroad bumper up front, along with a new radiator grille which resembles the one seen on the Wrangler. The bonnet and the fenders have also been customised to make it look like the Jeep SUV. The modification also includes a new set of doors, new wing mirrors as well as a hard top design.

The BlueBull comes equipped with 15-inch 10.5J steel rims, which are wrapped in 33-inch mud-terrain tyres from Maxxis. The SUV also gets custom rear fenders that continue the styling quotient. No details are available about the modified Thar’s powertrain. With that being said, the last-gen Thar to be available in the Indian market came equipped with a sole 2.5-litre four-cylinder oil burner producing 106 PS of power and 247 Nm of torque.

As of now, Mahindra is working on launching a new-gen model for the Thar in the Indian market, which will likely bring a lot of updates to the SUV like a touchscreen infotainment system, a semi-digital instrument cluster, front facing rear seats, a hard-top version, an optional petrol powertrain as well as an optional automatic gearbox for the first time.