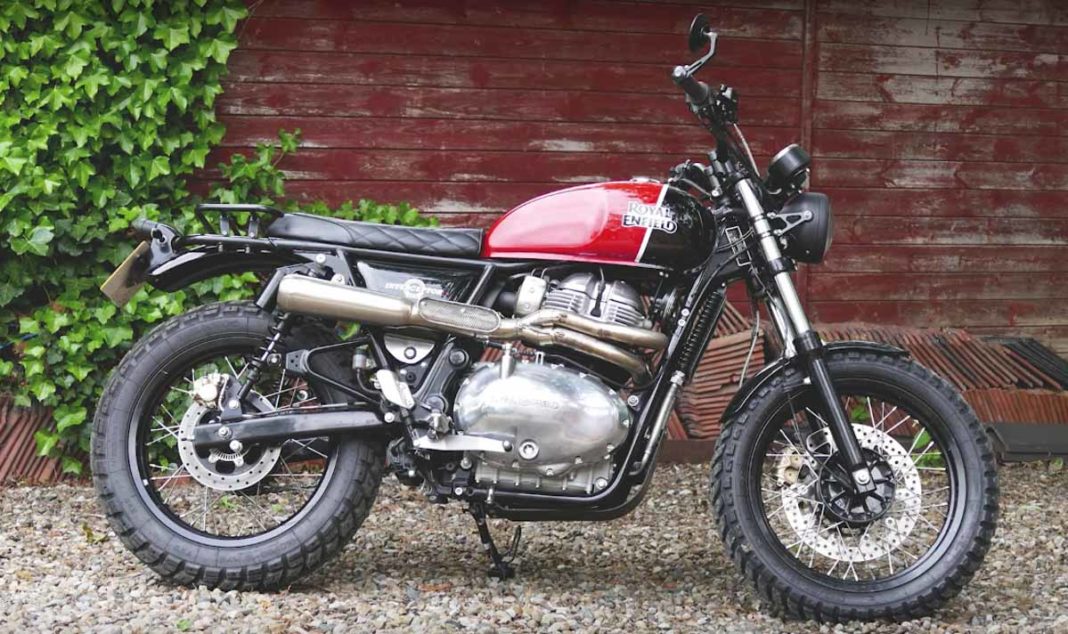 In this video, you can watch a stock Royal Enfield Interceptor 650 being transformed into a street scrambler. To improve the overall performance of the motorcycle, the stock air filter has also been replaced with a hi-flow DNA air filter. Besides these changes, the motorcycle has also been fitted with a new high level 2 in 1 exhaust system as well.

At the beginning of the video, you can notice that the Interceptor 650 has already been fitted with fatter knobby K60 tyres at the front and rear. It also features a smaller aftermarket LED headlight, a shorter seat and a luggage rack at the rear. To make sure that the bike performs equally well when the tarmac gives up on the rider both the front and rear suspension of the motorcycle has also been raised.

The person who is working on this Interceptor 650 Project said that the Royal Enfield Interceptor 650 is not an easy bike to fit an aftermarket exhaust setup. However, they have tried really hard to fit a 2 in 1 exhaust system which not only is practical but has also enhanced the overall appearance of the motorcycle.

The exhaust setup that you see in these videos is still under works and the final unit will look a slightly different than this one. The aftermarket exhaust system from TEC has also improved the power output of the motorcycle by almost 2 bhp apart from making the bike sound a lot better. Like we already mentioned above, the motorcycle has also been fitted with hi-flow DNA air filters as well that have increased the flow of air to almost 98 per cent over the stock air filter.

The motorcycle will also receive some more performance upgrades in the future. The front suspension will be modified again and will get around 30 mm of more travel while the footpegs will be also positioned slightly lower than the stock setting to achieve a proper scrambler look.

The motorcycle will also get a custom made side stand as well because it has now gained slightly more ground clearance. Lastly, it will also be fitted with a smaller aluminium luggage rack at the rear to complete the overall look.