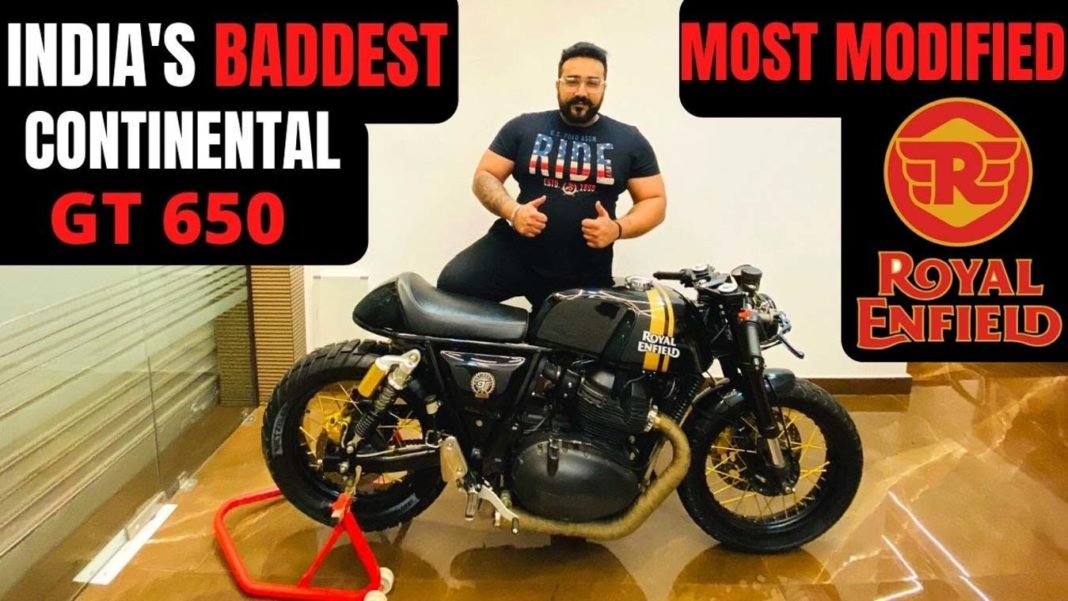 The Royal Enfield Continental GT 650 shares its 648 cc parallel twin motor with the Interceptor 650, and is currently RE’s flagship offering

The Royal Enfield Continental GT 650 cafe racer is one of the most stylish looking  motorcycles that is currently sold by the manufacturer. Apart from the good looks, Royal Enfield has also equipped the motorcycle with its biggest and most powerful powertrain (648 cc parallel twin engine), which makes it an attractive offering.

However, the package is not enough for some, and one such person is Ashwin Singh Takiar, who has customised his Royal Enfield Continental GT with modifications worth Rs 2.83 lakh! In a video uploaded on his YouTube channel, Mr Takiar talks in detail about all the modifications he has made to his RE cafe racer. Take a look at the said video below –

The changes on this RE Continental GT 650 include front USD forks from KTM RC 390, which lend the motorcycle an aggressive riding position while also improves the handling. Along with the front suspension, the vlogger also had to replace the stock disc and calipers with KTM units as the original RE parts weren’t compatible now.

The fuel tank of the bike has been retained, but the engine has been blacked out for a more sporty look. The chassis of the Continental GT has been altered in order to justify the cafe racer tag, while the exhaust has also been chopped off to make it look like a drag pipe. Since the bike has become a strict single seater now, the rear foot rests have been removed.

The motorcycle also features a new aftermarket headlamp, a Brembo brake lever, golden painted spoked wheels, a new analogue speedometer, an exhaust wrap, new front and rear tyres and much more. The standard Continental GT 650 draws power from a 648 cc parallel twin, air-oil cooled engine that belts out 47 hp of max power at 7,250 rpm, along with 52 Nm of peak torque at 5,250 rpm. However, the ECU of this customised bike has been tuned to generate additional 8 horsepower.

As mentioned earlier, the modifications have cost Mr Takiar a whopping Rs 2.83 lakh (approx.), which is actually more than the starting price of the stock Royal Enfield Continental GT 650, i.e. Rs 2,80,677 (ex-showroom).