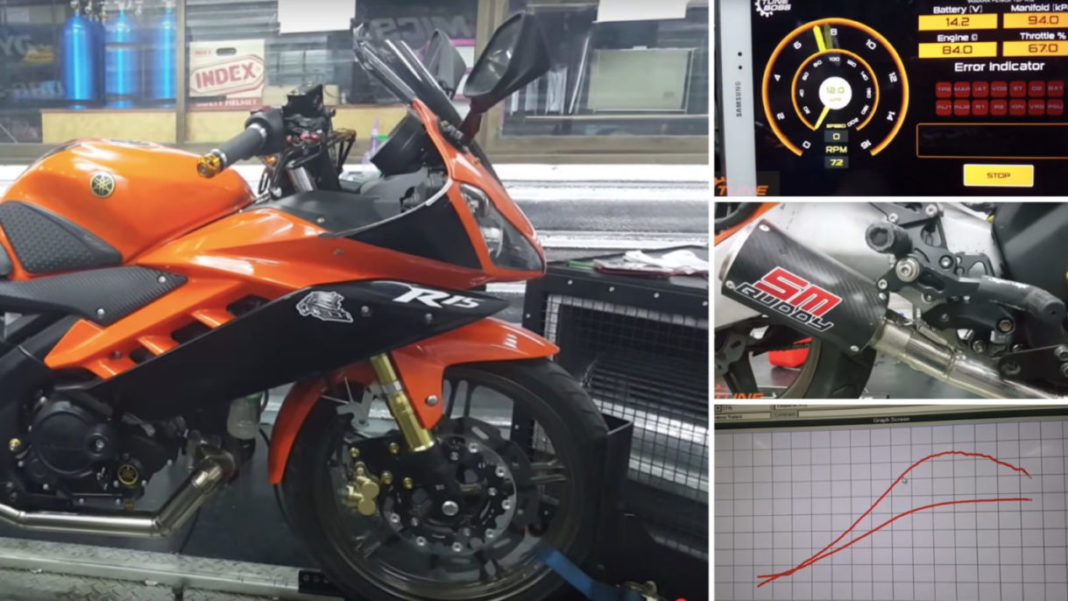 The Yamaha R15 is definitely the sportiest motorcycle in its segment. Its Deltabox frame makes it a joy in the corners, where keen motorcyclists can easily carry pretty high speeds. However, the previous versions of the motorcycle have often been criticized for the lack of outright power, especially when compared with a Bajaj Pulsar 200NS or a Pulsar 220 in a straight line. Here is finally a modified Yamaha R15 that can put all the criticism to rest.

The modified Yamaha R15 seen in the video here is capable of reaching speeds of up to a whopping 180 km/h, which makes it really very fast for what is essentially just a 150cc motorcycle. The biggest modification that this R15 has undergone is the fitment of a turbocharger, which makes it much more powerful than the stock version.

The Thai-spec Yamaha R15, it is powered by a 155cc single-cylinder, liquid-cooled engine that produces upwards of 19.2 bhp and a peak torque of 15 Nm. However, thanks to the addition of a turbocharger, the motorcycle is now capable of producing a maximum power of 22.9 bhp, which is much more than what the motorcycle originally produced.

The increase in power that benefits this modified Yamaha R15 is mainly due to the addition of the turbocharger kit. Basically, by turbocharging an engine, you introduce forced induction to the motor. This is an easy way to extract more power from a small engine.
We can already see many car manufacturers using low capacity turbocharged petrol engines on their cars.

The only tricky part here, especially when it comes to aftermarket tuning, is proper installation and calibration of a turbocharger. Another big challenge that commonly affects the performance of turbo-motors is the lag that they experience at the low RPMs. This phenomenon is more pronounced on the small capacity motorcycles as their engine speeds vary rapidly.

Therefore, we are not very sure how well this modified Yamaha R15 would perform on the streets. On the dyno seen in the video, however, the modified Yamaha R15 dazzles us with a top speed of 180 km/h, which can put some much bigger motorcycles to shame.