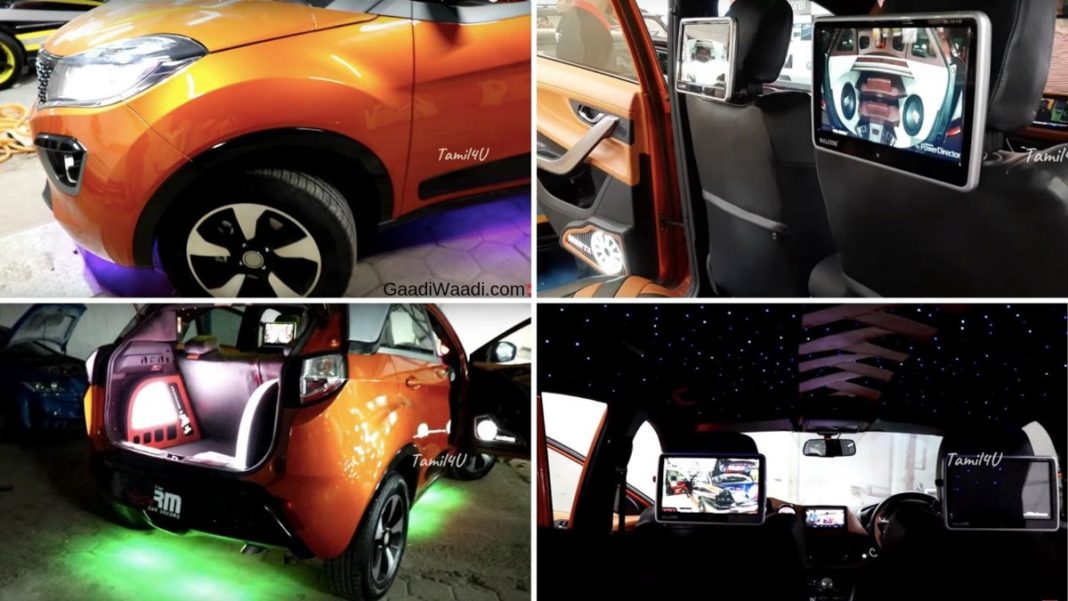 It is claimed that this customised Tata Nexon, which offers a very jazzy interior, carries modifications worth Rs. 5 lakh

Tata Nexon is a fairly popular compact SUV that has left a sizeable dent in the popularity of models like the Ford EcoSport. Thanks to a modern design, powerful engines, a feature-laden interior and attractive prices, the Nexon has been quick to form a large fan base. Many of the owners are known to have modified their steeds but today, our focus is on a modified Tata Nexon that has a very jazzy interior and is known to carry modifications worth Rs 5 lakh.

The talking point of this modified Tata Nexon is the expensive multimedia system it has been equipped with. The stock Nexon has a best-in-class 8-speaker audio unit that is sourced from Harman. However, the owner of this SUV decided to get rid of the company-fitted unit and instead equipped the vehicle with several new screens and expensive components.

The audio system of this modified Tata Nexon alone costs upwards of Rs. 3 lakh, while there are many other modifications that cost another Rs. 2 lakh in total. As per the customizers, the new audio system is so good that it can give occupants a concert-like feeling. It has many 3-way components with an active sub-woofer. The new unit also has many tweeters and a mid-woofer. There are also a set of amplifiers to ensure that every component delivers to its fullest.

The stock touchscreen infotainment unit has been moved towards the left, while there’s a new multimedia screen positioned closer to the driver. There are also two multimedia screens at the rear, which have been mounted on the back of the front headrests.

There are also many fancy lights to jazz up the ambience of the cabin of this modified Tata Nexon. The roofline is also new and has a starlit theme, much like what you find in a Rolls Royce.

The exterior of this modified Tata Nexon, however, remains largely stock. It features the factory-spec Etna Orange shade that debuted with the launch of the AMT model. It even features the stock diamond-cut alloy wheels. That said, in order to complement the interior, the exterior sports neon lights.