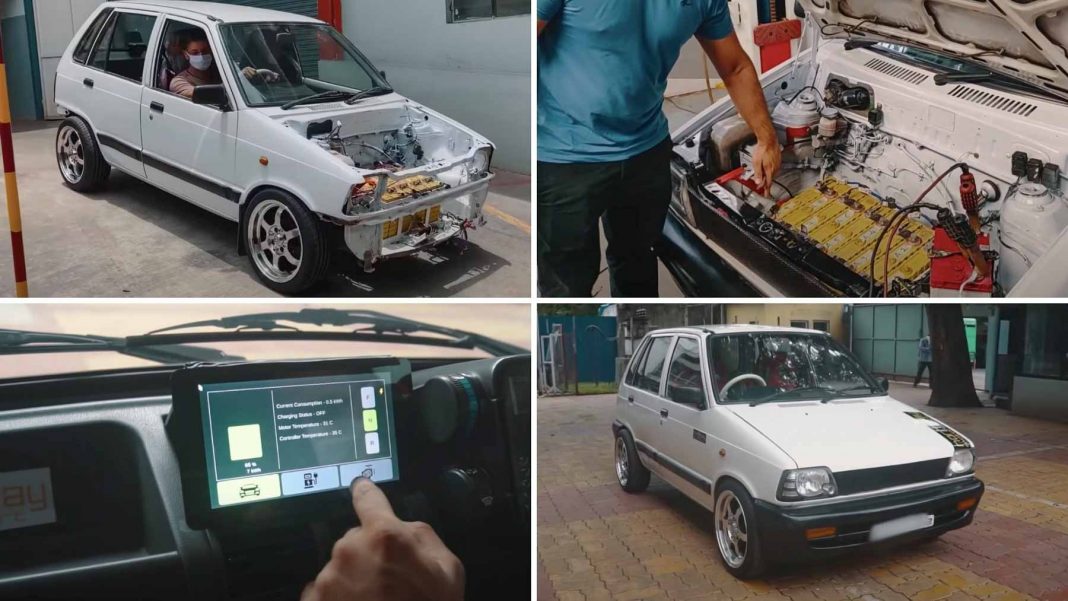 Maruti Suzuki 800 hatchback etched its place in automotive history due to a number of reasons. The affordable budget model attracted people in aplenty as the frugal nature and the ability to be parked in tight space along with the reliability proved to be too good to resist for many decades across the country.

A few months ago, we posted about a digital imagination of the 800 into an electrified hatchback. Whether the Indo-Japanese manufacturer would revive the nameplate for a mass market-based EV to cause a big stir in the auto sector in the near future is unknown. However, it is worth noting that the test runs with the JDM-spec Wagon R began quite a long time ago.

While we could be some time away from seeing a budget-friendly zero-emission vehicle from Maruti Suzuki, here we show you an EV conversion based on the old 800 hatchback. Hemank Dabhade posted about his creation on his Youtube channel and it is certainly well done up!

Based out of Pune, he bought a regular Maruti Suzuki 800 for just Rs. 75,000 in a good condition and the IC engine was replaced in favour of an electric motor with 19 kW capacity alongside a Curtis SE controller. The electric motor drives the rear wheels with a claimed torque output of 54 Nm and it can be increased to 70 Nm when required.

The electric motor is linked with a 7:1 stepdown single-speed transmission to increase the torque output and it helps in regenerative braking as well. The electrified 800 is said to develop 378 Nm of peak torque at the wheels and in theory, this should make for a mouth-watering performance as the instant torque and low kerb weight should come in handy.

The performance is so much that the hatchback would not shy away from doing power slides. Dabhade has used 9 batteries in place of the internal combustion engine and 7 more are positioned under the front seats for low centre of gravity. It is claimed to have a range of 120 km and top speeds of up to 85 kmph. The charging time stands at up to 4.5 hours.