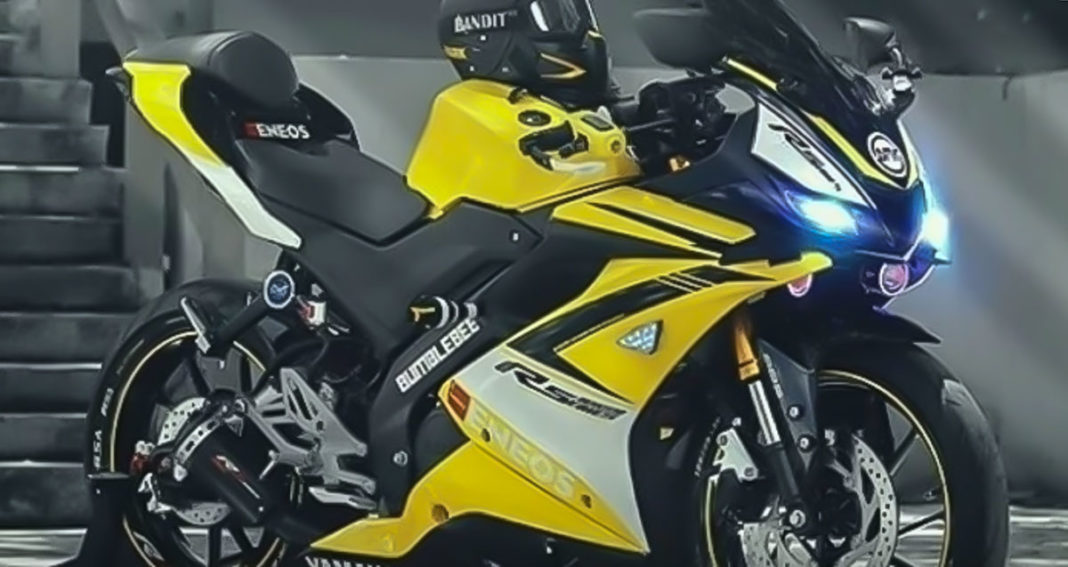 Yamaha YZF-R15 is one of the most popular machines among customization firms and we have already seen so many iterations of it. This latest modification of R15 Version 3.0 is from Indonesia and they have made so many changes to give an aggressive look for the performance bike but it is not limited to aesthetics as the bike come with some performance parts also.

The basic design theme of R15 has been retained and Yamaha took inspirations from the flagship R1, so it already had superbike looks. The changes at the front are new projector lights positioned below the stock headlamps and it comes with integrated LED DRL ring. The LED headlamps have been smoked out to continue the sporty look.

The modified R15 come with a new visor finished in black colour by a brand called Autonity and the rearview mirrors has been replaced by R1 style mirrors. Along with this, a new winglet visor cap finished in blue colour has also been added. The stock indicators have also given way for new aftermarket LED indicators for a modern look.

The fuel tank gets new tank pad and grip but the instrument cluster has been retained from the current model, which packs lots of information. The clip-on handlebars come from the stock bike but the modified R15 gets MotoGP inspired lever protectors. The modified R15 gets the frame slider, which will protect the bike from slow crashes as it won’t damage the fairing.

The rear gets so many changes as the stock fender has been removed and they have added a new license plate holder and tail lights can be mounted on this. The stock exhaust has been replaced by a new free flow SC-Project exhaust, which is expected to increase power output by 2-5 bhp according to the manufacturer.

One of the major mechanical change on the R15 is the addition of PowerTRONIC ECU and it has increased power and torque output, which is not yet revealed and top speed has also gone up from the stock model. All these performance parts for the R15 can be bought from Amazon and it can be easily fitted to your R15 also.