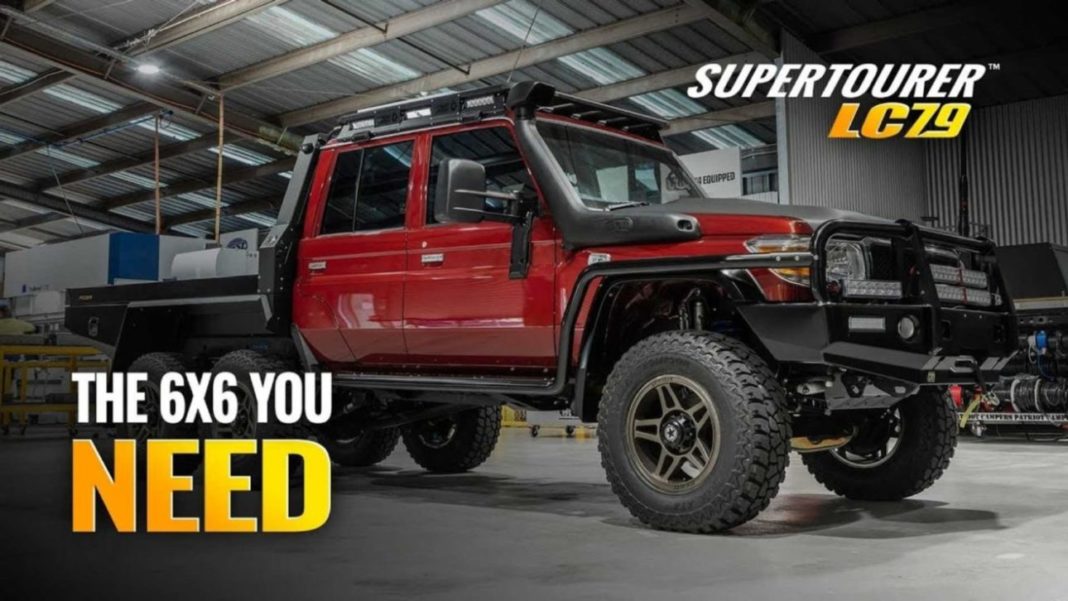 When many put 4×4 vehicles at the top of their bucket list, only a few would actually own them. Unless you’re an off-roading and adventure-seeking enthusiast, the 4×4 utility vehicles won’t cut the mustard. Now, image an uncompromising 6×6 vehicle waiting right at your doors, would you take it? Yes, you definitely would in most cases!

When talking about a legit 6×6, the Mercedes-Benz G63 AMG 6X6 will definitely come to mind due to its massive proportions and the ability to run over pretty much everything in its path. We have come across an equally bonkers 6×6 based on the Toyota Land Cruiser and it does have an angry demeanour, so as to rip someone’s head off.

Jokes apart, Patriot Campers has come up with a modified Toyota Land Cruiser and tuner started with adding an extra axle. Dubbed the SuperTourer 6×6, it is morally insane as the company, which is known for building overland modifications, has worked its magic on the legendary nameplate that does not need any introduction and is brimmed with authenticity.

One of the notable changes includes a King remote reservoir suspension system with adjustable airbags. Just as its other custom jobs, this Land Rover is constructed to tame the toughest of terrains and the third axle really got the modifiers excited. Each axle comes with a locking differential enabling the massive wheels to spin at the same speeds.

Thereby increasing the traction especially when the going gets tough. The additional axle gives more grip as well. The Land Cruiser 6×6 has its load capacity increased to 4.5 tonnes. The truck bed is also brand new and is made of lightweight aluminium materials for better corrosion resistance along with load-carrying strength.

A toolbox, winch and roll-out storage space for overlanding equipment can be seen inside the truck bed. Despite the ludicrous levels of modifications performed, the 6×6 Toyota Land Cruiser is perfectly road legal and it will intimidate your neighbourhood with ease.