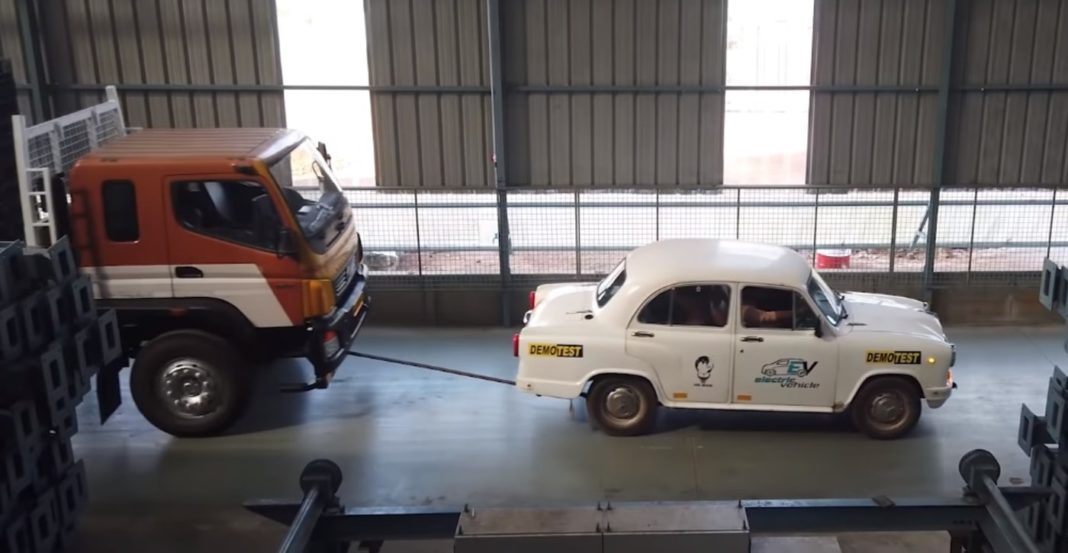 Check out this Hindustan Ambassador, retro-fitted with an EV conversion kit, which is capable of towing a loaded medium-duty truck

Electric mobility is on the rise, and the government of India is pushing for the adoption of electric vehicles. In fact, although customising ICE vehicles is illegal in our country, converting them into EVs is not! A few companies, like e-Treo, are already offering electric conversion services for old cars, which is quite a practical alternative to scrapping a vehicle.

If you’re technologically inclined, you might know that there are plenty of benefits of driving an electric vehicle. Firstly, there are no tailpipe emissions, and secondly, the running costs are extremely low compared to cars with internal combustion engines. Also, electric vehicles provide instant torque, usually much higher than an equivalent petrol or diesel car.

Here, we have a video, which shows us an old Hindustan Ambassador pulling a fully-loaded Bharat-Benz truck! This particular Ambassador isn’t a stock car though; it has been converted into an EV using a custom conversion kit, built by He-Man Auto Robopark Pvt Ltd.

The video begins with footage the truck being loaded, which seems to be a medium-duty BharatBenz 1415R (Gross Vehicle Weight: 14.5 metric tonnes). The rear end of the Ambassador EV is then attached to the truck via a cable. The torque benefits of an EV are immediately apparent as the demo car manages to tow the truck without any problem.

According to the company, this custom Ambassador EV generates 53 HP of maximum power and a massive 275 Nm of peak torque. The vehicle draws power from a 20kWh battery pack, consisting of 22 individual lead-acid batteries. It can go from 0 to 60 kmph in just 12 seconds, and can reach a top speed of 120 kmph, which are decent performance figures. 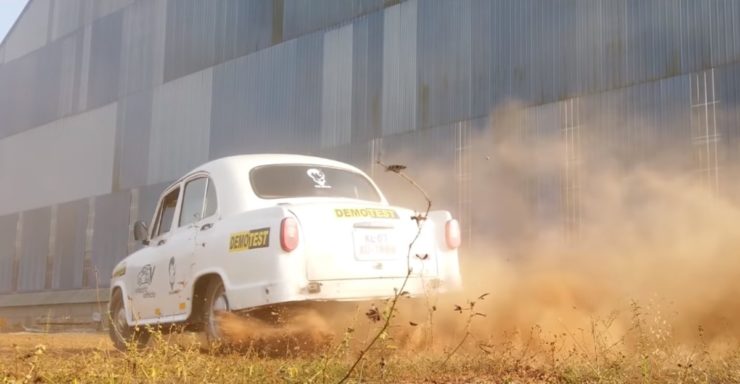 On a full battery, this electric Ambassador is capable of delivering a driving range of 100 km, and it takes around 8 hours to charge it completely from zero per cent using a regular power outlet. The cost of building this prototype was around Rs. 6 lakhs, including the RnD costs. The production version of this EV conversion kit would be much lower, although that might take a while, maybe even a few years.