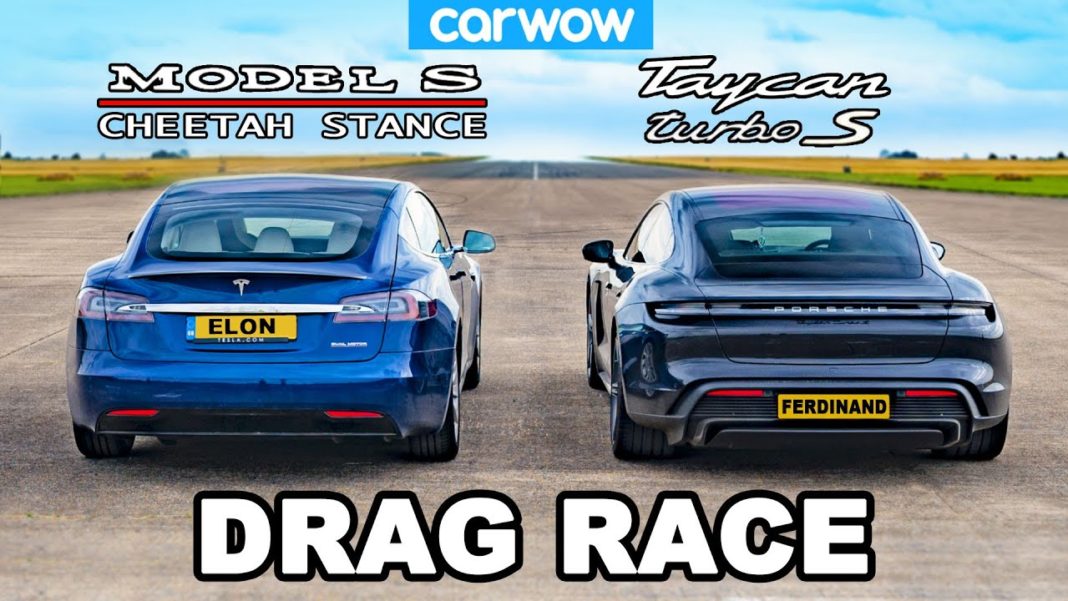 Tesla is currently the most successful electric car manufacturer in the world, with four car models currently available under the brand – Model 3, Model S, Model X, and Model Y. Tesla cars are also renowned for their “ludicrous” performance, with explosive acceleration and respectable top speed, both inherent qualities of an EV.

German sportscar manufacturer Porsche also has an EV in its lineup, the Taycan. Although Porsche doesn’t have a lot of experience building electric cars, its first attempt was quite a brilliant one. Also, the company has stated that it is planning to go completely electric in the future, which means they are committed to EV technology.

If you’re wondering how these two cars compare against one another, we have the answer right here, in terms of performance at least! Here, we have a video of a Porsche Taycan Turbo S and a Tesla Model S Performance. This video, uploaded by Carwow, compares the two EVs in different areas of performance.

Firstly, the two cars are up for a standing quarter-mile drag race, which the Porsche wins, twice! In terms of roll-on acceleration from 30 mph (48 kmph), the Porsche lags behind the Tesla for a few seconds, but eventually thunders ahead. In roll-on test from 70 kmph (113 kmph), the Taycan simply rolls ahead with ease, and in terms of braking from 70 mph to a standstill, the Porsche wins once again.

The Tesla Model S performance produces a maximum horsepower of 825 hp and a peak torque of 1,300 Nm. It has a dual-electric motor setup, one on each axle, effectively turning this into an AWD vehicle. It is quite a heavy car though, weighing in at 2,241 kg of kerb weight. In terms of price, this top-of-the-line Model S is GBP 105,000 (roughly equivalent to INR 1.03 crore).

The Porsche Taycan Turbo S produces a lot less power than the Model S – 761 hp and 1,050 Nm of peak power and torque, respectively. The Porsche also uses a similar dual-motor AWD setup as the Tesla to channel power to the wheels. At 2,295 kg, the Porsche is heavier than the Tesla, and at GBP 139,000 (roughly INR 1.36 crore), it is also much more expensive.

Why does the less powerful and heavier Porsche consistently win against the Tesla? Well, the biggest advantage the Taycan has against the Model S is its 2-speed transmission at the rear axle. The lower gear focuses on acceleration, and the higher one on top speed, thus giving the Porsche a massive edge over the Tesla in terms of performance.