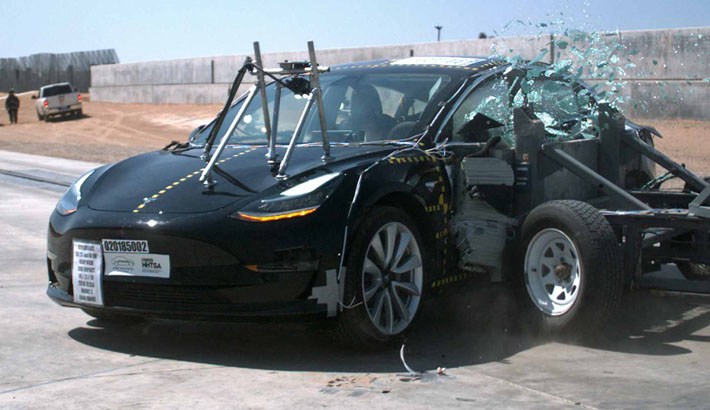 Tesla recently posted in their official blog a report that the Tesla Model 3 was declared the safest car that NHTSA has ever tested. National Highway Traffic Safety Administration or NHTSA is an executive branch of the US government who is responsible for writing as well as charging Federal Motors vehicle safety standards.

This particular organization has performed a thorough crash safety test on the Tesla Model 3 vehicle and released all the data and results this week. According to NHTSA the Tesla Model 3 passengers has the lower probability of an injury than any of the other vehicles tested by them.

NHTSA previously also tested the Tesla Model X and Model S which scored decently too but they are keeping the Model 3 on the top of their list for being the safest vehicle. So how the Model 3 does manages to be such a safe car? According to Tesla, the car is based on the advanced architecture of Model S and Model X which too were tested by NHTSA and they also had the lowest and the second lowest probabilities of an injury amongst all the other cars tested by the organization.

Based on those inputs and data Tesla engineered and made the Model 3 to be the safest car they ever built. The smaller size of the electric motors compared to the conventional petrol or diesel motors and the location of batteries in the vehicle give the Model 3 slightly more advantage.

Like the other two models in the Tesla lineup, the Model 3 also gets the benefits from its all-electric architecture and powertrain design. The car gets a strong and rigid passenger compartment, a separate protective case for its battery pack, and also the overall low centre of gravity.

The strong design structure helps prevent any sort of intrusions within the cabin and also the battery modules. It also helps in preventing the car from rollover risk and distributes the entire crash force systematically away from the cabin. The Model 3 also gets plenty of crumple zones towards the front which helps in absorbing the crash impact.

The Model 3 scored top scores in almost every single category plus it also features every NHTSA-recommend safety technology as standard. According to the data released by NHTSA the Tesla Model 3 probability of an injury to the passengers seating inside during a serious crash is below 6 per cent.

This percentage is even lower than the rating of Model S and the Model X which occupied the second and third spot in the list of top 50 vehicles tested by NHTSA since 2011 making the Tesla Model 3 the safest car of this planet.