Tata Motors introduced the long-awaited Harrier in January 2019 and it has received tremendous popularity among Indian customers. The Harrier is under pressure currently as new rivals are coming in thick and fast. MG Motor debuted in India with the Hector while Kia is commencing its sales operation with the Seltos next month.

The homegrown auto major recently updated the Nexon with refreshed features list due to increased competition in the sub-four-metre SUV segment. Now, it has turned its attention towards the Harrier. Based on the feedback received from customers as well as media, the Harrier has made improvements to reduce NVH (Noise, Vibration and Harshness) levels.

Apart from the changes to reduce NVH levels by improving sound insulation, Tata Motors has improved the response of the ‘soft touch’ clutch as well as steering for the betterment of feedback and responsiveness. It has been said that the existing owners can also receive these updates during their next visit to the dealerships. 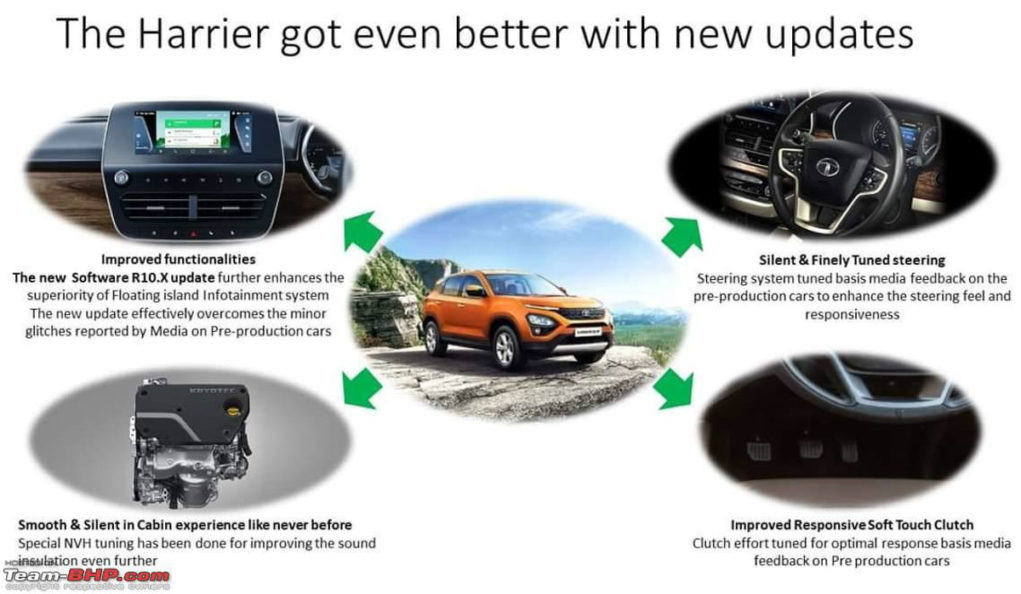 The 8.8-inch floating touchscreen infotainment system with Apple CarPlay and Android Auto connectivity gains updates to avoid existing glitches as well. The R10.X updates will over the minor issues faced on the infotainment system of the pre-production cars driven by media outlets.

A few days back, Tata introduced the much-need dual-tone colour scheme into the Harrier’s lineup and it can be had in the XT and XZ variants with an additional price of Rs. 30-40,000 over the mono-tone colours. The Harrier is priced between Rs. 13 lakh and Rs. 16.56 lakh (ex-showroom) and offered in a single engine choice.

The 2.0-litre four-cylinder Kryotec diesel powertrain is essentially the same unit found in the MG Hector and Jeep Compass sourced from FCA. It develops 140 PS and 350 Nm of peak torque, and is mated to a six-speed manual transmission. Later this year, Tata will launch the seven-seater Harrier dubbed Buzzard.

It was revealed at the 2019 Geneva Motor Show in March and will be powered by the same engine uprated to kick out 170 PS as in the Compass and Hector. Moreover, a brand new petrol engine is also expected to feature under the bonnet of the Harrier by early 2020 and an optional six-speed torque converter AT sourced from Hyundai is also on the cards.