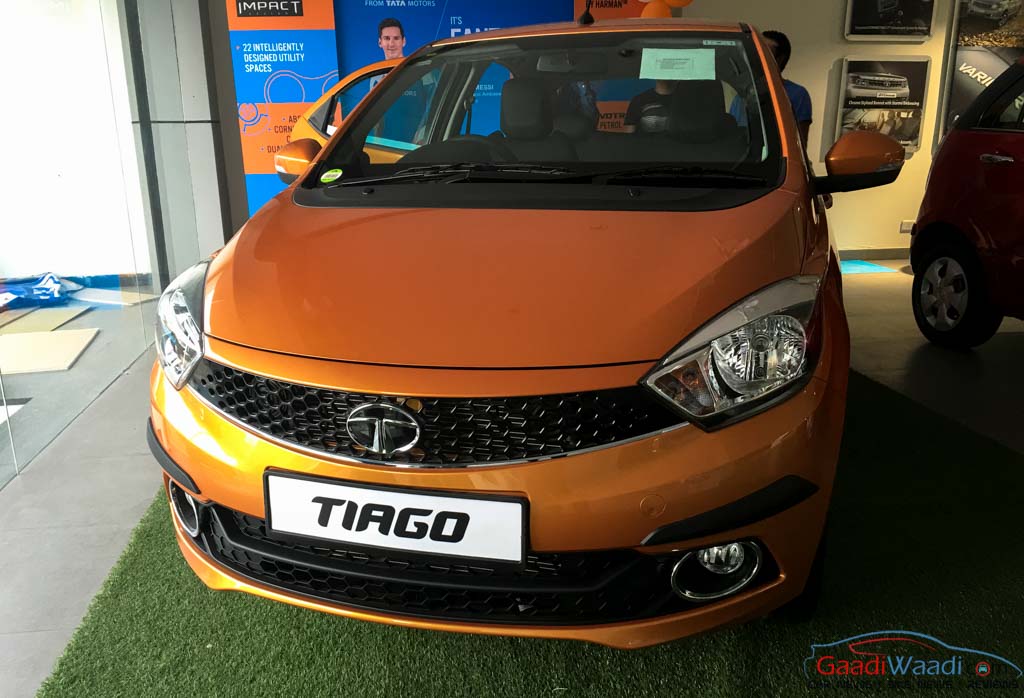 Story broke out in late February that the production of the all-new Tata Tiago hatchback had commenced at the Indian auto maker’s Sanand plant and already 1,800 units were manufactured. With the rumour mill circling, in the first week of this month, Tata Motors heralded a specific date for the launch to be on March 28th.

The launch has been a long time coming as Auto Expo 2016 was believed to be the perfect occasion for the company to unveil the radical model in its product line-up. But Tata Motors decided to just showcase the Tiago for public, sparking the media to guess over a potential commercial launch date again. Putting the past speculations aside, the bookings for the compact hatchback began in the second week of March for Rs. 11,000 across wide network of dealerships across the country. With just two days away from the launch now, the recently renamed hatchback has been spotted at a dealership by us and it indicates that the deliveries will be kicked off sooner than anticipated.

Expected to be priced between Rs. 3.9 lakh and Rs. 5.5 lakh, the Tiago is built on a new platform and shares design cues with the slightly upmarket Bolt hatchback and Zest subcompact sedan. It derives power from all-new DOHC aluminium Revotorq 1.05-litre diesel and a 1.2-litre Revotron petrol motor. The three-cylinder petrol mill is capable of pushing out 83.8 bhp and 114 Nm of peak torque. The three-pod diesel unit is tuned to churn out 69 bhp of maximum power and 140 Nm torque. Both engines will be linked with a five-speed manual transmission sending power to the front wheels and an AMT as seen in the Zest could be offered in a later time. The Tata Tiago measures 3,746 mm long, 1,647 mm wide, 1,535 mm high and has a wheelbase of 2,400 mm with 170 mm ground clearance. It has 22 utility spaces and the boot can accommodate 240 litres of storage. Tipping the weighing scale at just over a tonne, it is bolted with a set of new 14-inch alloy wheels and packs features such as independent front suspension with McPherson struts and coil springs. The rear has semi-independent suspension with twist beam for better ride quality and stability. Styled keeping in reference the brand new design philosophy from Tata Motors, the Tiago will be available with the ConnectNext infotainment system developed by Harmann with eight speakers, multi-spoke steering wheel with mounted controls for audio and phone functions, smartphone-based navigation for Android only, double-pod instrument binnacle with a multi-info digital display at the centre, AC vents with body colour highlights, Bluetooth connectivity and so on. On the outside, the sporty hatchback gets fitted with an amicable, smiling-faced front fascia with honeycomb mesh pattern, sleek headlamps, character line running in an uppish angle through the door handles and on to the rear, roof-mounted spoiler and inverted D-shaped tail lamps. As for the safety equipment, the Tiago is kitted up with ABS(Anti lock braking system), EBD (Electronic Brake force distribution), driver and front passenger airbags, speed-sensing auto door locks, engine immobiliser, corner stability control system, etc.