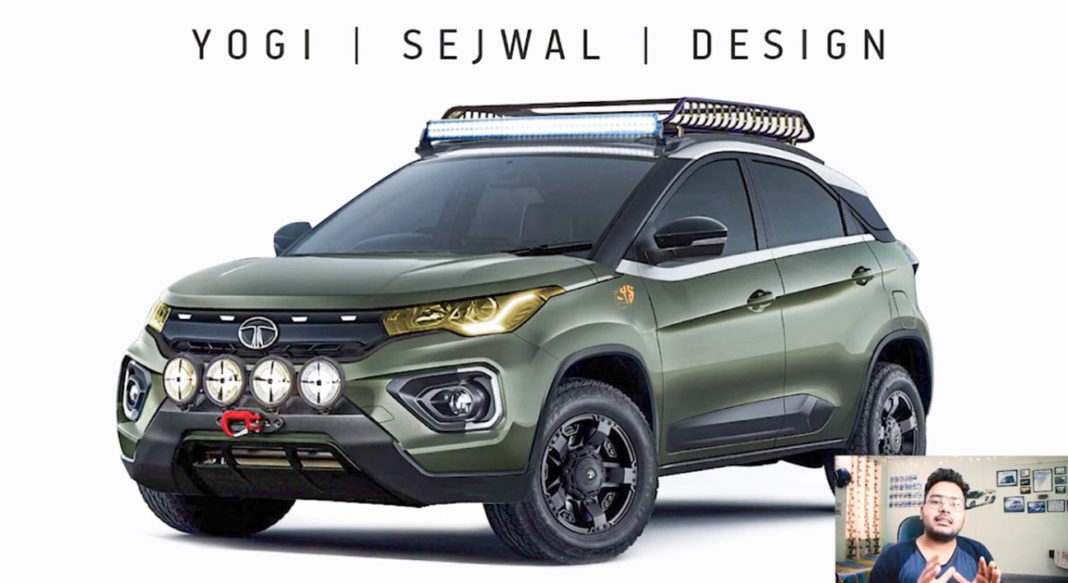 While the Tata Nexon is an immensely popular car in the country, the sub-4m SUV is not an extreme off-roader and is meant to be driven on roads in its stock form. However, there’s no stopping anyone from having a vision and imagining the car as something its not, and that’s exactly what Yogi Sejwal Design has done.

In a video uploaded on his YouTube channel, he has digitally rendered the Tata Nexon into a hardcore off-roader, and we have to say, the end product looks pretty impressive. This Foliage Green coloured Nexon features some extensive changes made to its exteriors that include a set of off-roading tyres with black rims, which was probably the most important aspect while creating this rendering.

Other changes made to the car include a roof rack, along with a roof mounted LED flood lamp for better visibility. Four auxiliary lights have also been added to the Nexon’s front bumper for the same purpose. Also, it gets a tow hook that has been placed on the front bumper of the car. The headlamps feature a yellow tint.

As for the powertrain department, the Nexon draws power from a 1.2-litre turbocharged petrol engine that belts out 120 PS of maximum power, along with 170 Nm of peak torque. Also on offer is a 1.5-litre turbo diesel motor that is rated at 110 PS/260 Nm. The transmission duties are handled by a 6-speed manual gearbox, along with an optional 6-speed AMT on both the engines.

Tata Motors currently retails the Nexon at a starting price of Rs 6.94 lakh, which goes up to Rs 12.69 lakh (both prices, ex-showroom). The sub-compact SUV competes against the likes of the Mahindra XUV300, Maruti Suzuki Vitara Brezza, Hyundai Venue as well as the Ford EcoSport in the Indian market.

Soon, the Tata Nexon will be getting a host of new other rivals as well, since Renault, Nissan, Toyota and Kia are all working on launching their own sub-4m SUVs in the Indian market in the near future.