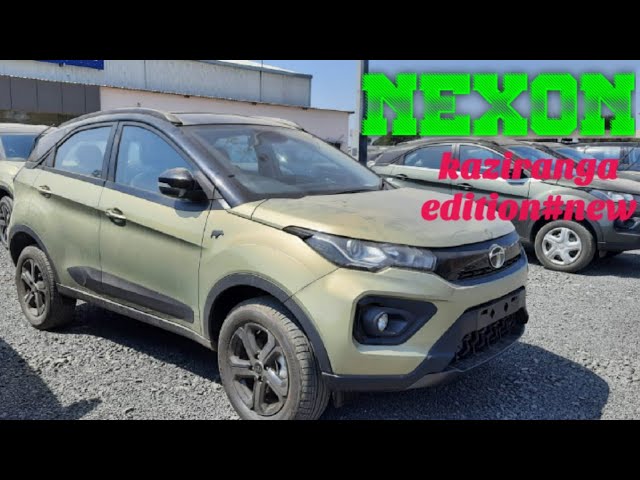 Tata Motors started the teaser campaign for the Kaziranga Edition of the Nexon, Punch, Safari and Harrier a few days ago on its social media channels. It is endorsed to be an ode to the magical land “preserved in God’s pristine purity” and the special editions are launching soon. They have already begun reaching dealerships as well giving us an early glimpse.

The Kaziranga National Park is a World Heritage Site located in the district of Assam and it plays host to two-thirds of the world’s great one-horned rhinoceroses. The Tata Punch Kaziranga Edition was showcased at the 2022 IPL auction event and it will be auctioned at the tournament with the proceeds donated to conserve the national park.

The Tata Nexon, Punch, Safari and Harrier Kaziranga editions will feature similar visual updates and they are done up in the exclusive Meteor Bronze colour scheme. Courtesy of a Youtube video, we now got to see the updates involved in the Nexon Kaziranga Edition clearly while the brand is releasing features one after the other in its teaser videos.

The rhino motif can be seen on the front fenders, rear windscreen, glovebox, and the Kaziranga word is written on the scuff plates. The Kaziranga edition is part of the long list of special editions or visually embellished variants from Tata including the Safari Dark, Gold and Adventure Persona editions. The Nexon, Nexon EV and Altroz also received the Dark Edition treatment last year while the Harrier has had it for some time already.

With no change in performance, the Tata Nexon Kaziranga Edition will continue to be powered by a 1.2-litre three-cylinder turbocharged petrol and a 1.5-litre four-cylinder diesel engine. The former produces 120 PS and 170 Nm while the latter kicks out 110 PS and 260 Nm. Both six-speed manual and six-speed AMT will likely be offered in the special edition.