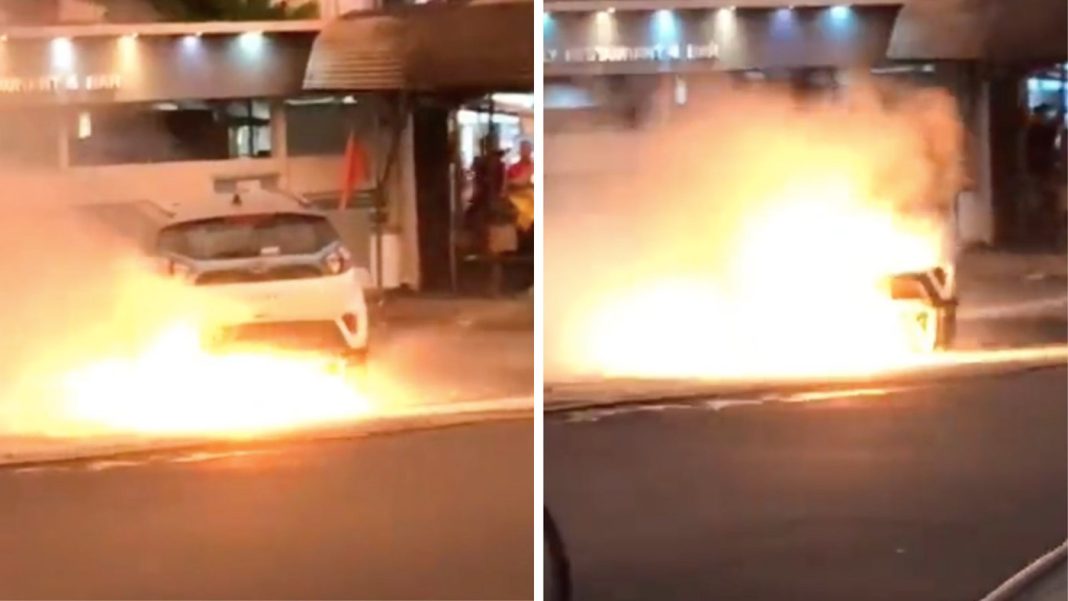 UPDATE: In the aftermath of the incident, Tata has released an official statement:

“A detailed investigation is currently being conducted to ascertain the facts of the recent isolated thermal incident that is doing the rounds on social media. We will share a detailed response after our complete investigation. We remain committed to the safety of our vehicles and their users. This is a first incident after more than 30,000 EVs have cumulatively covered over 100 million km across the country in nearly 4 years.”

A Tata Nexon EV has caught fire yesterday in Vasai West near Panchvati hotel, a Mumbai Suburb, Maharashtra. Since the video of the electric compact SUV engulfed in fire came out, there have been plenty of mixed reactions. While the fire was extinguished and none appears to have been injured, the reason behind the incident is yet unknown and we do hope Tata would investigate the cause behind it.

The video was posted by a journalist named Kamal Joshi on Twitter and the co-founder of Ola Cabs and Ola Electric, Bhavish Aggarwal, reacted to the fire incident. He replied, “In case you missed it @hormazdsorabjee EV fires will happen. Happens in all global products too. EV fires are much less frequent than ICE fires.”

Taking a dig at the mainstream media would not go well with everybody and it’s an utterly different topic. He believes that electric vehicle fires are much less frequent than fires that happen in IC-engined models. What we say is the risk of fire, whether it is a battery-powered vehicle or a traditional ICE vehicle, should be taken seriously as it involves human lives.

In case you missed it @hormazdsorabjee ?

EV fires will happen. Happens in all global products too. EV fires are much less frequent than ICE fires. https://t.co/gGowsWTKZV

Ola Electric came under tremendous pressure after many fire incidents were reported in the appalling summer conditions across the country. Perhaps instead of poking fun at a reputed journalist on a social media platform, Aggarwal could take responsible actions to avert such incidents in the future and other issues involved with the S1 and S1 Pro that we have seen being reported often.

Back to the Nexon EV, the fire accident was said to have happened when the owner was going home after charging his SUV at his office. He had driven only four to five kilometres with no high-speed driving in the city area. He heard some click sounds before getting a notification on the dashboard.

When he stepped out of the car, he saw smoke billowing out of the battery pack and the fire spread rapidly. The Nexon EV is on sale in India for more than two and half years and more than 30,000 units have been retailed so far – making it the highest-selling passenger EV in the country. With that said, despite being the first of its kind, a probe would enable the transparency to let people know what has happened!