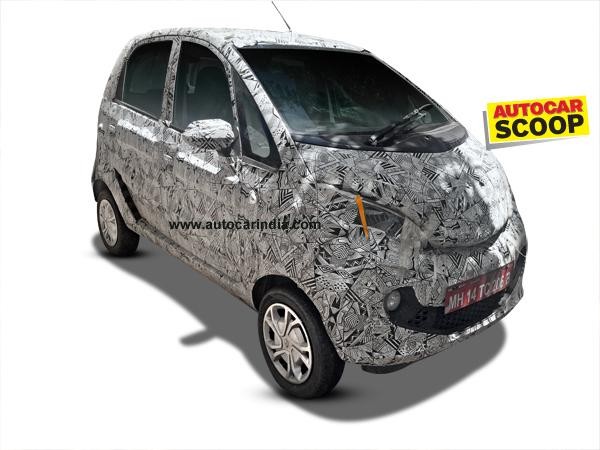 Tata Nano is preparing for the most significant upgrade to the Nano small car ever and it has been caught under testing for the very first time in Pune. Codenamed as Pelican, it will be slotted between the Nano GenX and the recently launched and rather impressive Tiago hatchback as reported by Autocar. It stands in confirmation with the statement of Mr. Ratan Tata that a three-cylinder engine developing 61hp or 81hp was in the works and it will be slightly upmarket to give the customers an alternate option to the current GenX.

It will have larger tyres and wheels as well to distinguish itself apart from the standard Nano. The spotted test mule was seen featuring with 13-inch tyres as opposed to the 12-inch size in the current model. This hints at a bigger capacity engine and will share most of the components and parts with the GenX Nano. The styling seems to have received comprehensive revisions as well as the front portion has been changes with the headlight and bonnet structure reminiscent of the Nano Europa concept. The road-going final production version is said to have different front and rear bumpers despite the test car sported the bumpers from GenX Nano. The rear fender is reported to accommodate the fuel filling provision as contrary to the current underneath-the-bonnet position. The wiper unit is more likely to possess double arm design as seen on the test vehicle alongside a new windshield washer system in the bonnet’s middle. As for the interiors, the changes will continue into the all-new dashboard and instrument cluster positioned behind the steering wheel while the seats will be brand new as well. The position of the speedometer is moved to the console’s centre while the tachometer is nowhere to be found. However, the steering wheel is retained from the GenX Nano as does the AC vents from the Tiago. It is reported to feature Harman ConnectNext infotainment system ditching the conventional CD/MP3 system with Bluetooth connectivity. Said to be sold along with the GenX Nano, more details are expected to come to the fore very soon.