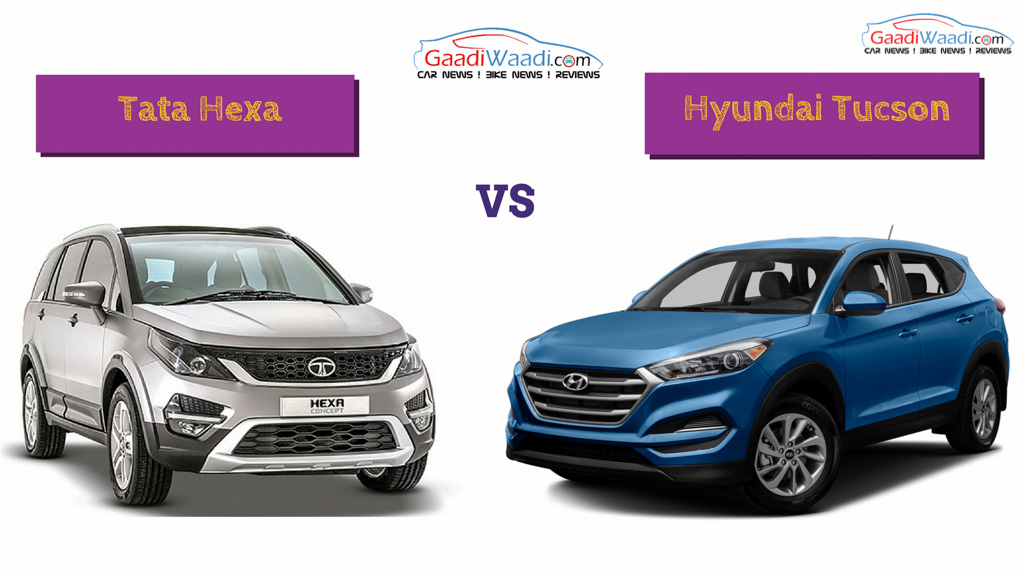 The Tata Hexa crossover will be eyeing the spotlight currently held by Mahindra XUV500 and Toyota Innova Crysta while the Hyundai Tucson is a contemporary SUV looking to re-discover its berth in the auto industry. Both models are of different body styles and will be targeting varying band of customers. However, the price range in which they will be offered have made them attractive and rendered potential buyers willing to spend lakhs of rupees to evaluate them as possible head-to-head rivals.

Tata Hexa will be the most premium product the Indian brand has ever dropped in and on the other side the Tucson has been aiming to strengthen the SUV portfolio of the Korean manufacturer since its launch. The Hexa people carrier will follow a brand new IMPACT design language that will be adapted by Tata’s future models while the Tucson sticks by global Fluidic exterior. Here’s how they fare in our specs comparison: Designed and overseen by the same team with Indian and overseas expertise as the Tiago hatchback, the Hexa is the first SUV crossover to be produced by Tata receiving suggestions from Land Rover. Sitting on the modified Aria platform, it was first introduced at the 2015 Geneva Motor Show, the Hexa follows the Indica, Indigo Manza and Aria concepts unveiled in the previous editions of the Swiss motoring show.

Developed on the brand’s new Impact design philosophy, it is clear from a single glance that the Hexa is the most premium offering from Tata with the well-sculpted body lines and attractive front fascia. It will feature a newly designed large 19-inch multi-spoke alloy wheels on the top-spec trims. Up front it comes adorned with a chrome slat underneath the grille running towards the headlights, flatter bonnet shape, dual-tone bumper with aluminium skid plates and honeycomb mesh grille above the trapezoidal front air dams. The latest generation Tucson SUV made its global premiere at the 2015 Geneva Motor Show and was launched sooner at the auto major’s home country of Korea with instant success both locally and in international markets. Its design is based on the latest Fluidic Sculpture 2.0 philosophy with styling inspirations derived from the bigger brother and the flagship Santa Fe SUV. The Tucson SUV in its third generation is being offered in India through CKD route. It marks the second stint in the Indian market as the first generation model entered in 2005 was discontinued within five years due to poor response. It will be slotted between the Creta and the Santa Fe SUVs in the current fleet.

The Hyundai Tucson has an alluring road presence which could entice customers to buy the SUV. The Fluidic Sculpture design ethos was well implemented on the exterior making the model to look more upmarket and sporty from the rear end with short overhangs and sleek tail lamps. The façade has prominent hexagonal front grille flanked by the stretched-back front LED headlamps that extend till the large fenders. Also Read: Tata Hexa India Launch in October- All You Need to Know

It is embellished with a heavily sculpted side profile and has curvy roofline and long bonnet structure. The angling roofline has rendered a sport coupe-ish stance alongside thinner horizontal flowing lines signifying an overall silhouette with a standalone appearance. Proportionally, the five-seater SUV features wheelbase of 2,670 mm, 4,475 mm length, 1,850 mm width and 1,655 mm height. The fuel tank capacity is rated at 62 litres and the trunk capacity is an appreciable 513 litres.

It has to be admitted that the interiors of the Tucson are not as buzzing as the exterior. It offers a simple lay out split in to two dashboard parts while the three-spoke multi-functional steering wheel will have mounted controls for phone and audio. Additionally, it will be brimmed with anti-pinch sunroof, 18-inch wheels, keyless entry, push button start, powered tailgate that can be operated with a simple foot action, horizontal air vents, traditional buttons and dials, dual-zone climate control, ventilated and heated seats, an eight-inch touchscreen infotainment system as seen on the newly launched Elantra with reverse camera and navigation, Apple Carplay, Android Auto, etc. The Texa Hexa six-seater people carrier will derive power from the same 2.2-litre four-cylinder VARICOR 400 diesel engine as witnessed on the Safari Storme Varicor. It is good enough to generate a maximum power output of 148 bhp and 320 Nm of torque on the XE trim; 154.2 bhp at 4,000 rpm and 400 Nm of maximum torque delivered between 1,700 and 2,700 rpm on other trims. The engine is coupled with a five-speed manual, six-speed manual or an optional six-speed automatic gearbox with a 4WD drivetrain as option. With two wheel drive system as standard, the driver can choose from four terrain driving modes such as Dynamic, Automatic, Comfort and Rough Road. The diesel engine could return an approximate mileage of around 13 kmpl. The Hyundai Tucson 2.0L petrol generates 153 bhp at 6,200 rpm and 192 Nm at 4,000 rpm. Its fuel economy is rated at 13.03 kmpl for the manual and 12.95 kmpl for the automatic gearbox equipped model. Both engines will be paired with either a six-speed manual or a six-speed automatic gearbox. No four-wheel drive system on offer as power is sent to front wheels only. This makes the Tucson superior in terms of performance as it offers a petrol engine as well.

The Hexa could be competitively priced against its direct rival Mahindra XUV500 along with Toyota Innova Crysta and Hyundai Creta. It implies to a price range in the region of Rs. 12.9 lakh for the base variant and Rs. 19 lakh for the range-topping model.

The prices of the Hyundai Tucson SUV aggressively begin from Rs. 18.99 lakh for the base model and goes all the way up to Rs. 24.99 lakh for the top-of-the-line diesel variant. It is imported as CKD kits and assembled at Hyundai’s manufacturing plants in Sriperumbudur, Tamil Nadu to bring the costs down courtesy of up to 50 per cent localisation levels. While Hexa is expected to give nightmares to Crysta and XUV, it is also likely to make the customers re-think over opting for Tucson. The Hexa will form a new direction for the home grown company as it is in an urgency to mask the underwhelming success of the Aria. The not-so-productive Zest and Bolt made way for an all-new small hatchback called Tiago which is holding the flags up high for the brand in terms of selling figures currently and the Hexa will be trying to replicate that. Apart from the premium MPV, the sub-compact Kite 5 sedan will be slotted in to consolidate the product lineup as the brand embarks on a revival phase. No such hustle and bustle for the Tucson as the SUV focusses on utility loving audiences. It has almost created a niche segment below the Endeavour and Fortuner at a desirable price range. The all new third-generation Tucson boasts with international success and has more potential than the original model that failed to wow the Indian crowd. However, choosing between these two models is quite easy as Hexa has the looks, better interior, stuffed up features and an all important 4WD system at a much lower price range.
Also Read: Top 25 Upcoming Cars in India for 2016-17 [Update]