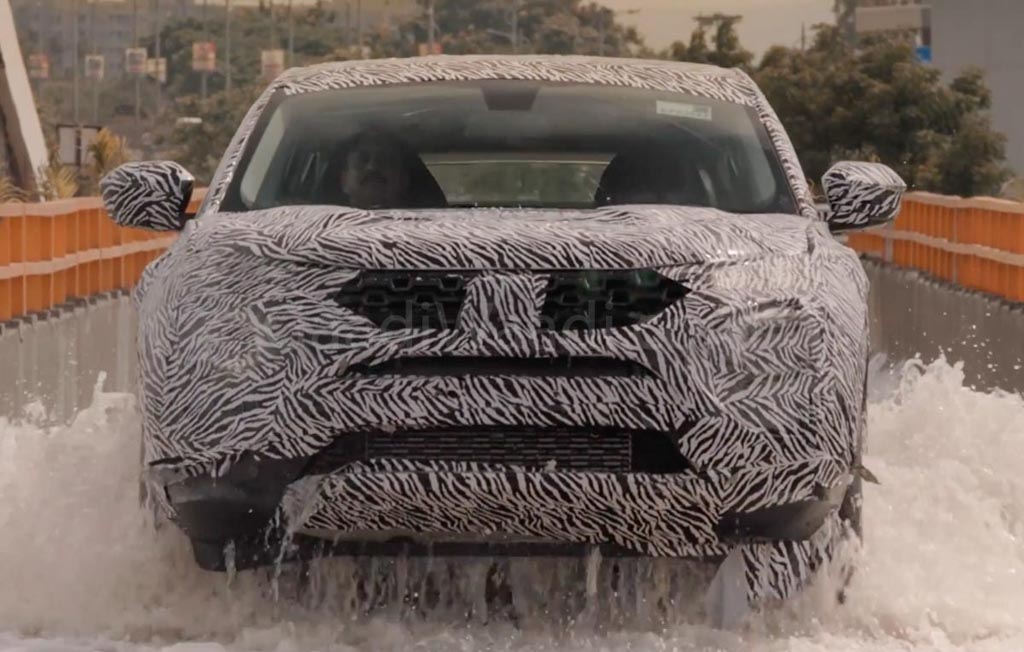 The Harrier SUV launching in early 2019 has been tested through 2.2 million kilometers on some of the toughest terrains

Tata Motors’ upcoming SUV Harrier is going through some of rigorous testing procedure before its launch. Tata Motors has been active on social media lately and already have dropped a couple of teasers of this soon to be launched SUV going through several durability, capability and quality tests.

A new teaser shows the Harrier SUV prototype going through the 4 poster test. The 4 Poster is a torture test which simulates real-life road condition tests under a controlled environment to tune the cars suspension setup and durability. Today, Tata Motors has released yet another teaser video on YouTube of the upcoming Harrier SUV showcasing its water wading capability.

In this video, you can watch a Tata Harrier test prototype which has been covered in heavy camouflage going through a deep water trench. This test was performed to check whether it can wade safely through troubled waters or not. As expected it successfully overcomes the obstacle and completed the test as you all can watch in this short video clip.

The Tata Harrier happens to be the production variant of the H5X concept was showcased at the 2018 Auto expo underpins a newly developed OMEGA-ARC platform developed in-house at Tata Motors and is based on the Land Rover D8 platform. The D8 platform supports some premium Land Rover SUVs like the Discovery and RR Evoque.

The SUV was spotted a number of times being tested all across India. Tata Motors says that the soon to be launched Harrier SUV has been tested for almost 2.2 million kilometers on some of the toughest of terrain. The Tata Harrier SUV will be powered by a 2.0-litre diesel engine mated to a 6-speed manual gearbox, while it will also be offered with a 6-speed automatic transmission as well sourced from Hyundai.

The engine is expected to produce around 140 hp of peak power while the torque figures are still unknown. Expect the Harrier to also get some premium features like LED headlamps and taillamps and it will be pitched as a premium SUV offering from Tata Motors. The Harrier SUV will offer seats for 5 passengers inside and will likely provide the most spacious cabin in its segment. The SUV will also be offered with both 2WD and 4WD options.

There are no details of the pricing available as of now but expect it to be priced in between 12-16 Lakh rupees approximately. The Harrier will compete directly with the Hyundai Creta and the Jeep Compass when it launches here in January 2019. There will also be a bigger seven-seat variant on offer as well later.