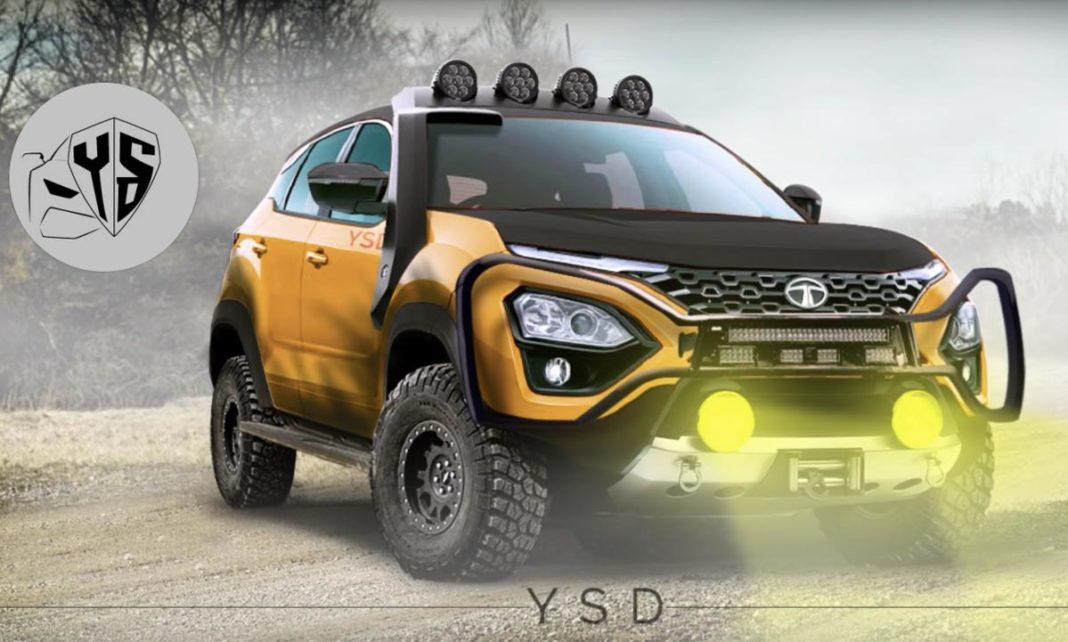 Tata Harrier SUV has bigger proportions than its competitors courtesy as it is based on the OMEGA (Optimal Modular Efficient Global Advanced) platform derived from Land Rover’s D8 that underpins over a million SUVs worldwide. It has several similarities with the Land Rover Discovery Sport and several internal bits have been toned down for cost-effectiveness.

The five-seater monocoque SUV shares wheelbase with the uber premium Discovery Sport at 2,741 mm and its larger dimensions play an integral role in the visual stance. Tata Motors does not offer the Harrier with a 4×4 system yet as it intended to position it aggressively in the price range between Rs. 12.69 lakh and Rs. 16.25 lakh (ex-showroom).

The Harrier SUV has a big underlying potential for customisation and we wished Tata had offered a similar kind of alloy wheels seen in the Geneva show floor as the current 17-inchers are rather subtle and uninspiring. A dealer-prepped dual-tone white body finish with blackened roof and alloy wheels we showed you recently is a prime example of the Harrier’s mod potential.

A Youtube channel called Desi Geeek has come up with a number of renderings in the past and showed his talents on an off-road spec Harrier SUV. The digitally imagined prototype fits quite well into the Harrier’s Impact Design 2.0 styling philosophy and we believe it so belongs to its traits. The renderer has given more off-roading tyres from Ford Raptor F-150 and normally they will be more than 34 inches.

For further enhancing visual appearance and functionality, he has added prominent side step and snorkel finished in black. The auxiliary lights sit atop the black roof and the wing mirrors are also done up in black. Up front, a black crash guard has been fitted covering the stock headlamps and fog lamps. An underbody protector is in the lower grille section with provision for towing and winching.

A mix of orange and yellow colours are used on the body and the bonnet gets a matte finish. The overall adventure off-roading theme infused onto the Harrier has been impressive that it definitely feels at home making us crave for a 4WD configuration in the stock model. We might get our wishes granted in the seven-seater variant scheduled for later this year.