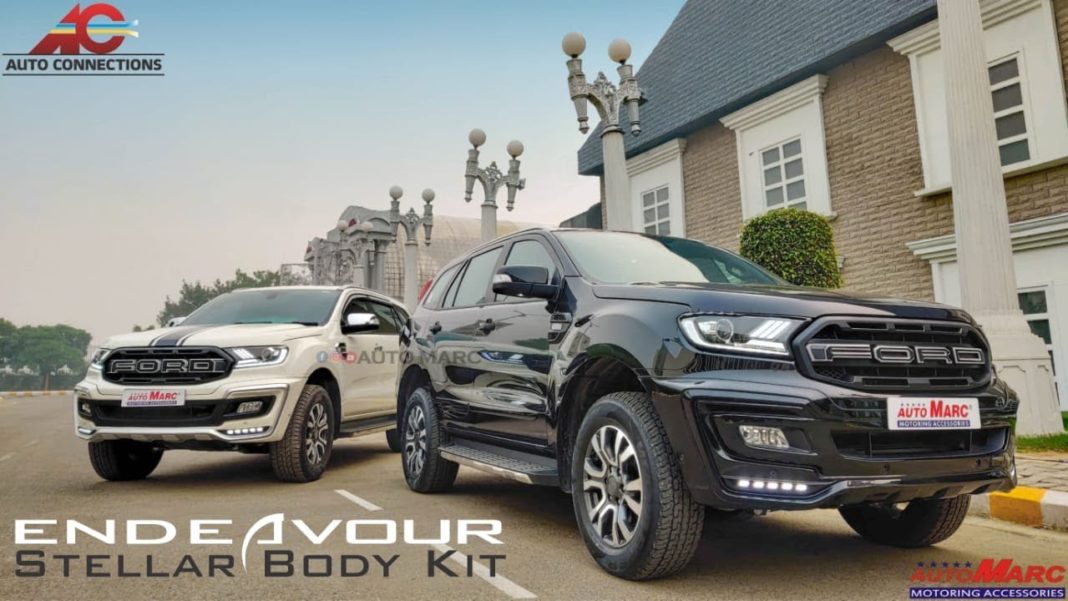 There’s no denying the fact that the Ford Endeavour is indeed, one of the most handsome and masculine looking SUVs available in the Indian market. In terms of size, the car is a mammoth and Ford has given it a design which complements its huge sizing factor.

However, the aftermarket modification shops always take it a step further. Auto Marc Motoring Accessories of New Delhi has modified two 2020 Ford Endeavours with a host of cosmetic upgrades, which make the cars look even meaner.

Dubbed as the ‘Stellar Edition’, the accessories on the front fascia of the cars include “M-style Bi-Xenon” headlamps with stylish LED DRLs; a Ford Raptor-Esque front-grille with the brand’s lettering in bold; and front Stellar body-kit with DRLs integrated into the bumper.

Apart from that, the cars sport a rear spoiler; a rear-quarter lamp; LED D-pillar lamps; rear garnish with brake lights embedded in the ‘ENDEAVOUR’ lettering; and the Stellar rear body-kit with quad exhaust tips and LED bumper lamps.

The black Endeavour has also gotten a chrome delete treatment, wherein all the chrome of the car has been blacked out, which has given the said car an all-black skin. On the other hand, the white Endeavour shown in video sports a black decal running through the middle of the car’s streamline.

No mechanical changes have been made to either of the cars. The 4WD written on the back confirms that the cars used are the top of the line Titanium Plus 4×4 variants, which is offered with a 3.2-litre five-cylinder diesel engine that puts out 197 hp of max power and 470 Nm peak torque and comes with an automatic transmission.

Ford retails the Endeavour at a starting price of Rs 29.2 lakh (ex-showroom), which goes up to Rs 34.7 lakh (ex-showroom). The mighty SUV directly rivals the Toyota Fortuner in the Indian market, while also puts up against the Mahindra Alturas G4, Skoda Kodiaq among other premium SUVs.