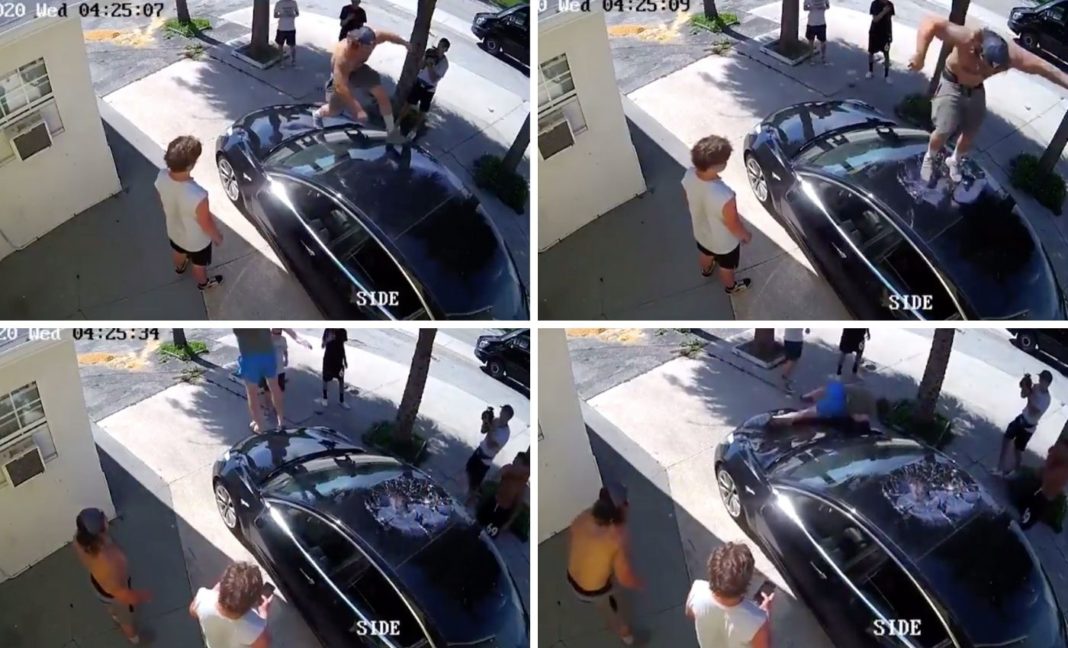 The reason behind the destruction of this Tesla Model 3 is unknown, and could possibly be some form of revenge on the owner of the EV

In a bizarre incident caught by a CCTV camera, a bunch of crazy troublemakers can be seen vandalising a Tesla Model 3 electric car. The video is definitely not for faint-hearted people, especially Tesla fans. The CCTV footage starts with a bunch of maniacs wreaking havoc at someone’s private property, and even filming it.

The first guy gets on top of the Model 3’s bonnet, and walks up to the roof of the car casually. Result? The all-glass roof of the Tesla 3 crushes instantly. A few seconds later, another member of this particular group jumps from a roof of the house where the Tesla is parked, and lands on to the bonnet of the car. He not only dents the bonnet badly, but also slips and falls down himself.

The intent of the maniacs caught in the video is unknown. There’s another video doing rounds of the internet involving a Tesla Model 3 being destroyed, however, this time it’s from the inside. The video has been shot by a famous YouTuber named Danny Duncan, who can be seen kicking the car’s touchscreen infotainment system repeatedly.

Even when the screen is shattered, the car seems to work perfectly fine. In addition, the Autopilot system of the car is active, and the car seems to be under the control, despite the harshness that it is facing. Danny is known for posting funny videos on the internet that make him and his viewers laugh. However, there is a line between destroying things for fun and destroying fully-operational vehicles, especially if they’re not yours.

Talking about the Tesla Model 3 (RWD with a single motor), it has a claimed driving range of 250 miles, and is capable of sprinting from 0 to 60 mph in 5.3 seconds, before topping out at 140 mph.

On the other hand, the long-range All-Wheel Drive version gets two electric motors and has a claimed range of 322 miles. The long-range variant is capable to reach the speed of 60 mph in just 4.4 seconds and has a top speed rated at 145 mph.