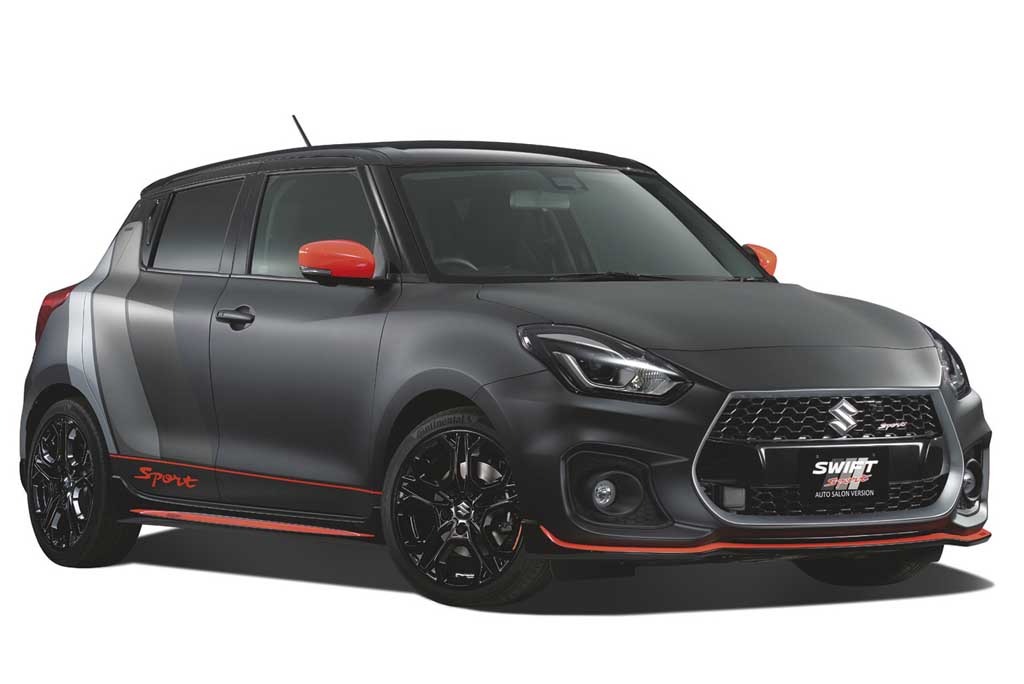 New Suzuki Swift Sport has impressed us at the very first appearance when the Japanese automaker unveiled the car at 2017 Frankfurt Motor Show. Now, the auto giant is ready to show the 2018 Swift Sport in a new guise at the 2018 Tokyo Auto Salon. The car dons a sporty and stylish matte black paint scheme with red accents.

At the 2018 Tokyo Auto Salon, this particular Swift Sport will reflect the colour scheme of a Suzuki GSX-S1000 superbike that will be displayed at the same event. The basic design of this Swift Sport is same as the standard model. There is an aggressive front grille flanked by sharp headlamps with projector units and integrated LED daytime running lights. Front splitters come wearing red paint and there are blackened fog lamp housings. Moving to side profile, the Suzuki Swift Sport gets shiny black alloy wheels, red trim at side skirts, red ORVM caps and shiny black paint on pillars and roof. The side profile also boasts sporty decals enhancing its style further. Not only at exterior, inside the cabin too, this Swift Sport comes with red accents at different places.

Alongside the Swift Sport, Suzuki will also showcase 11 other cars at the upcoming Tokyo event. Among these vehicles, there will be a Blue and Yellow camouflage painted Xbee, Spacia Camper, Carry pickup truck with fishing equipments. Also, there will be models like Solio Bandit, Alto Works, WagonR Stingray and Spacia Custom. Now, speaking about the Suzuki Swift Sport, this performance focused hot hatch is expected to arrive in India in coming years. Maruti Suzuki is all set to launch the third generation Swift hatchback in the domestic market in February 2018 and the Swift Sport too is expected to be showcased at the 2018 New Delhi Auto Expo alongside its regular version.

Considering the fact that both Maruti Suzuki and its Swift model are very popular in the Indian market, we can hope Swift Sport too will garner attention here. What’s making the Indo-Japanese car brand more enthusiastic about the Swift Sport is the increasing demand for performance focused cars in the country.