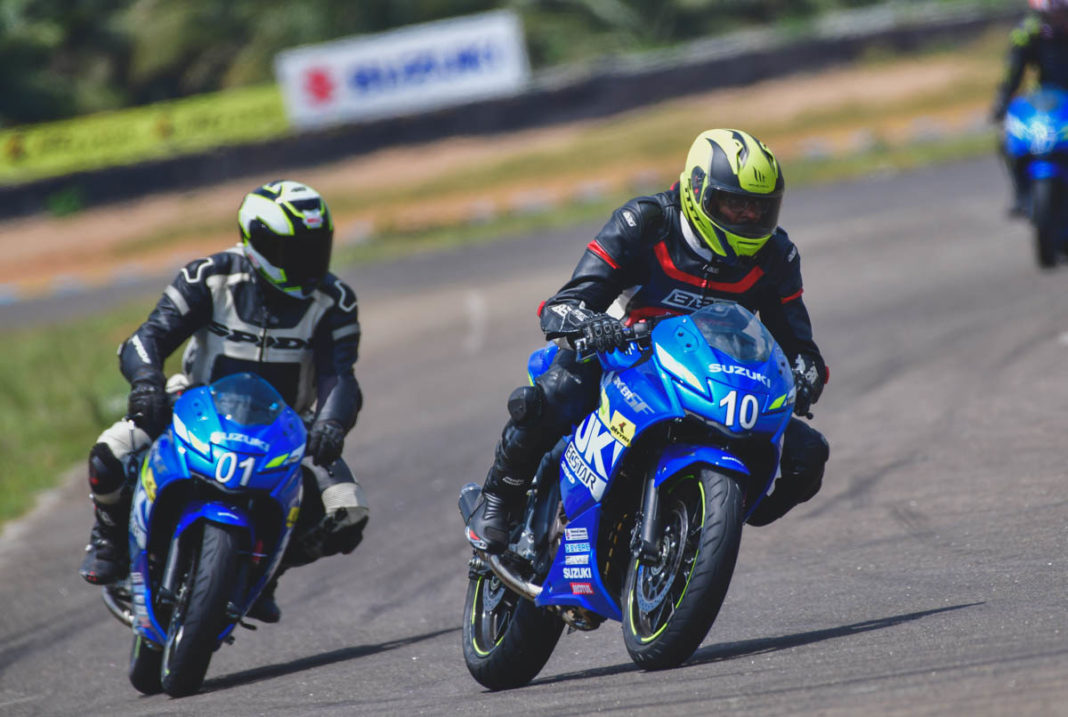 The opportunity to ride the race-spec Suzuki Gixxer SF 250 was too good to resist as I was thrilled for the whole weekend. Having had previous experiences racing at Kari Motor Speedway, the home track for me since I live nearby, I was confident and pumped to get going.

The endurance race throws in plenty of unique challenges as unlike a regular race you run against the clock and being consistent is the key to success. Suzuki has been successfully been conducting the endurance race for media personnel with conviction and the event was organised with perfection with every aspect in mind.

Ahead of the main race on Sunday, the journalists were given time to learn the track in a practice outing before each individual official timings were noted. Under the bright evening skies in Coimbatore, we took the race-prepped faired Gixxer 250 out for a spin and it immediately felt at home. 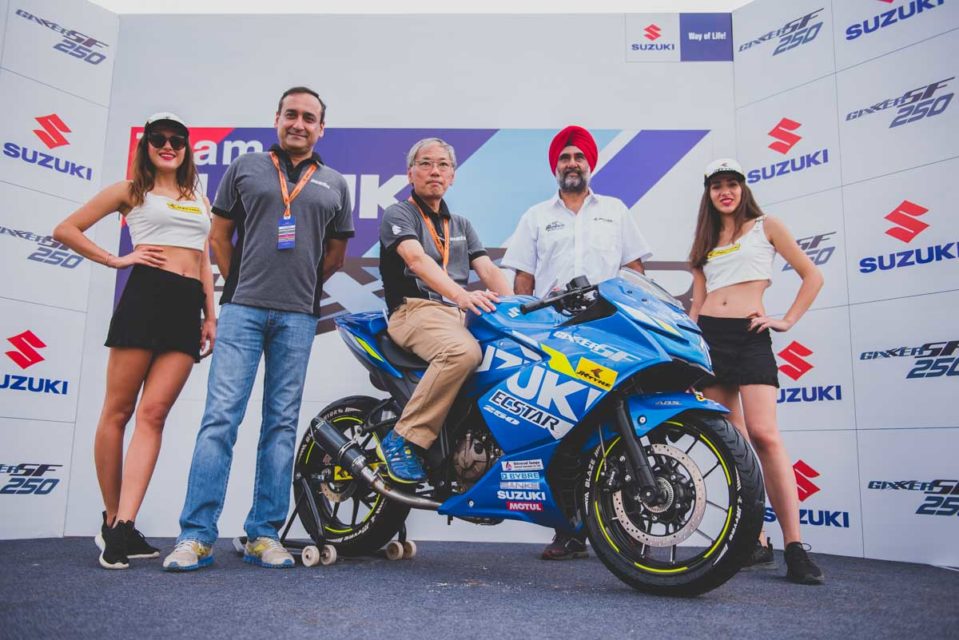 The race bike adorned the same livery as the MotoGP edition you could buy at dealerships and its sleek stature in race trim was a sight to behold. Besides the design I adored, the functionality bits were equally impressive. Suzuki reduced weight wherever it possibly could and to comply with regulations on track.

The 250s had not been properly raced by the pros by the time we got them on our hands and Suzuki sought to actively improve the track machine as the season progressed. The endurance race had a time limit of 40 minutes and the qualifying order was dictated taking the average time of two contestants who collectively worked as a team. 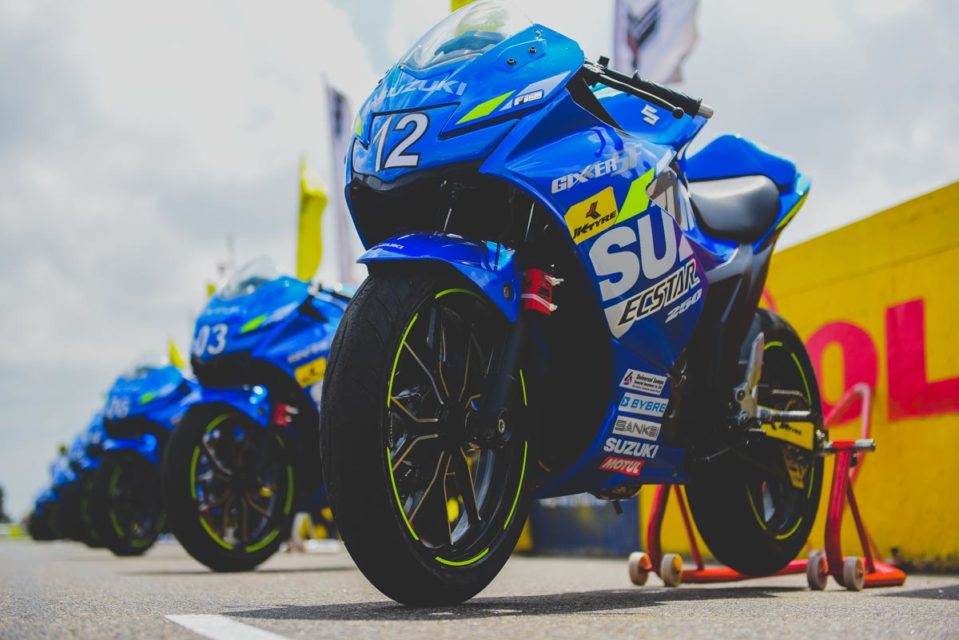 The journalists were subjected to a lucky draw and since my partner was nearly 25 seconds way off my best time, we had an immediate disadvantage and started from second to last on the grid. After the unveiling of the stock Gixxer SF 250 MotoGP Edition the following morning, we lined up for the race and each rider in a team were instructed to clock at least 17 minutes to avoid disqualifying as it ran by endurance rules.

With a little mix up on the timing sheets as I intended to go first and had to switch the decision last minute, my partner had a go at it first with each strategised to have one stint. You would not line up on the grid and get the chance to warm up the tyres during formation lap like in a general Grand Prix at the endurance race. 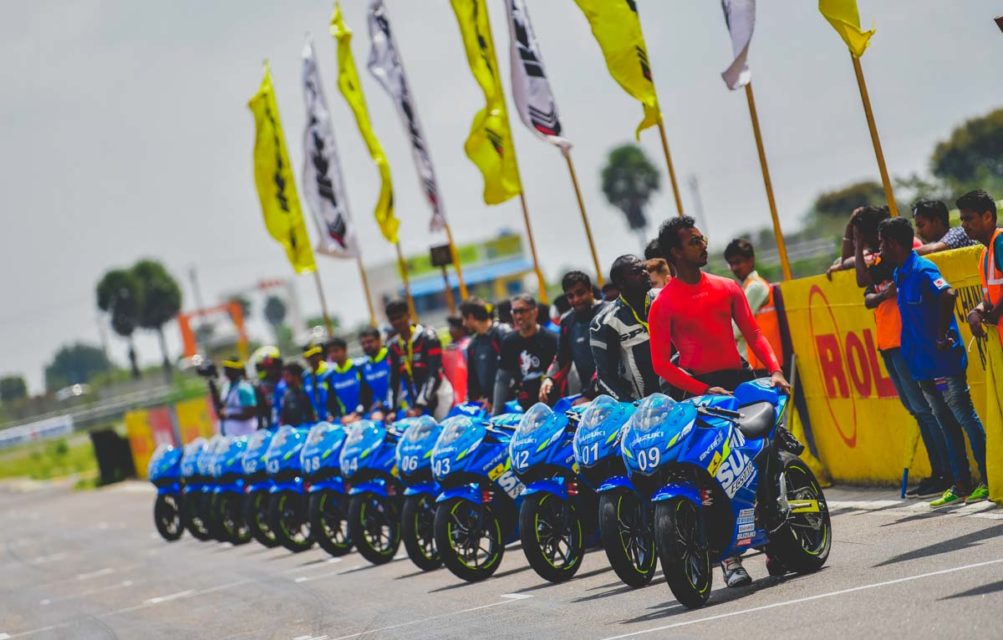 Instead, you would have to run towards the bike when the flag went green with the other rider holding it in place. This could lead to mishaps as falling over and misjudging the throttle would make or break your race.

Luckily, my partner had a decent start and wasn’t dead last at the end of the first lap I presumed but I knew I had to get him in as soon as the 17-minute mark was hit and I did exactly that. I had to push it to make up some places and my target was to better my qualifying time and possibly do some overtakes. 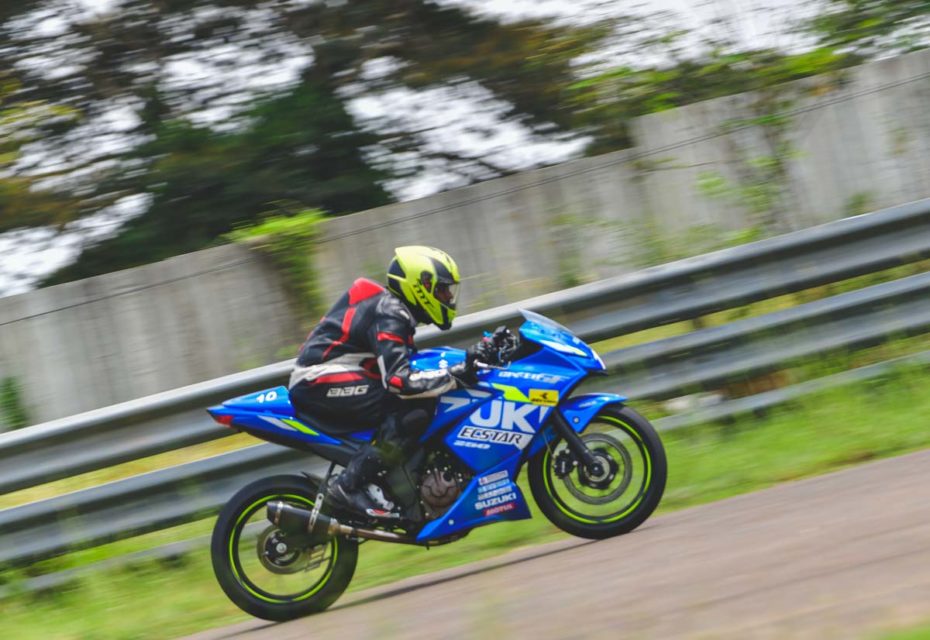 Just as in qualifying, the Gixxer SF 250, which didn’t undergo huge changes compared to the stock motorcycle in its race specification, put a smile on my face, especially through the corners. Kari Motor Speedway is a technical track where you would end up losing a chunk of time if you didn’t get the perfect racing line.

With several slow-speed corners and chicanes, the braking points played a key role in getting out faster on to the main straight. I immediately got in the groove on my out lap since I rode the quarter-litre race bike the previous day for qualifying and knew I had to push it hard to make up for the deficit. 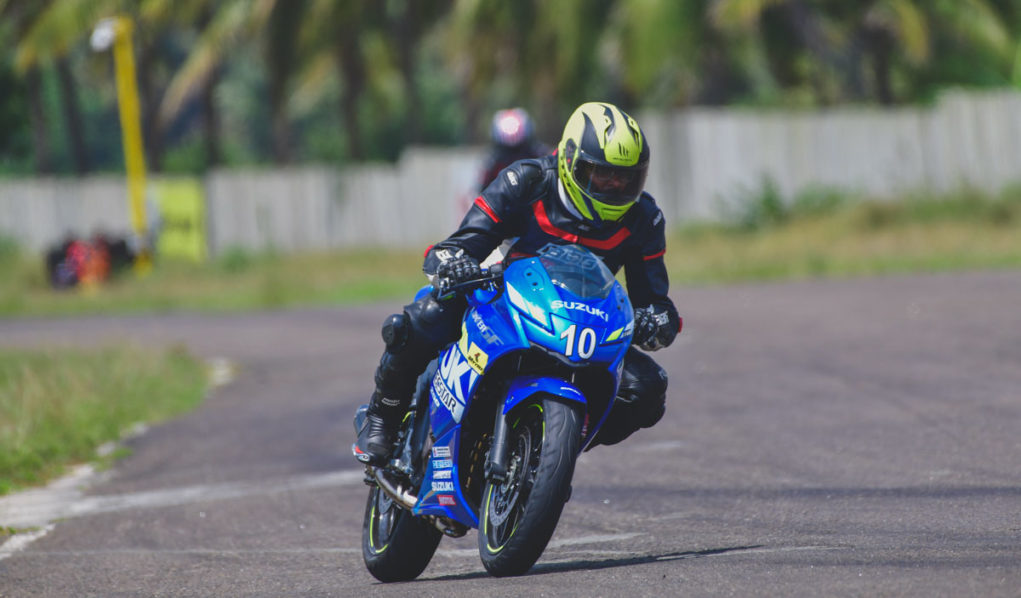 The track did through in a set of physical challenges and at places, you do not have run-off areas. The track itself is narrower compared to MMRT and can punish your lap times if are not focusing enough even though a single corner.

The endurance race of any kind requires a good mental approach as well as physical. If your body gives in, you cannot set consistent lap times and lose out positions. The sleek package of the Gixxer 250 did make my 20 odd minutes thoroughly emphatic as the low handlebar setup and sticky tyres did give me the confidence to push every lap. 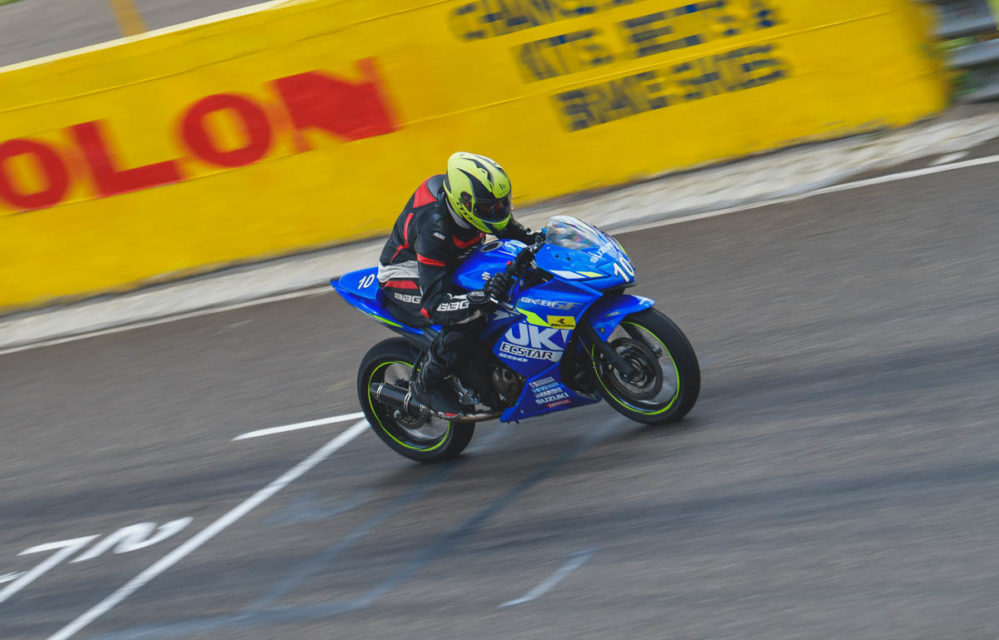 The lightness of the front end was equally impressive, although I wished it could have been more responsive and intuitive. The rear set footpegs urged me to lean in deeper and scrape along whenever possible while the brakes gave consistent feedback and stopping power especially down the straight and into the first right-hander where it is easy to head off the track.

I couldn’t grip onto the tank as much as I desired and the gearbox felt slick all along. The throttle response was immediate to say the least but on a race bike, you would really expect more. By the time the chequered flag fell, I was exhausted but the grin on my face could not have been larger. 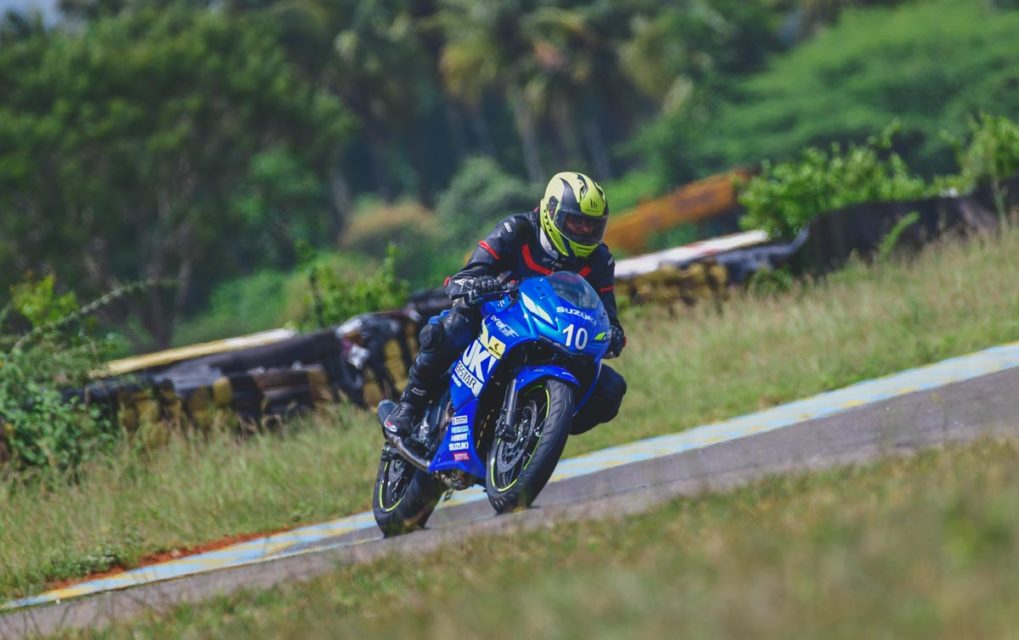 The race-spec Gixxer 250, which is not too different from the stock version, reiterated me why it is one of the best quarter litres out there and I cannot wait to get back on the faired stonker next time!