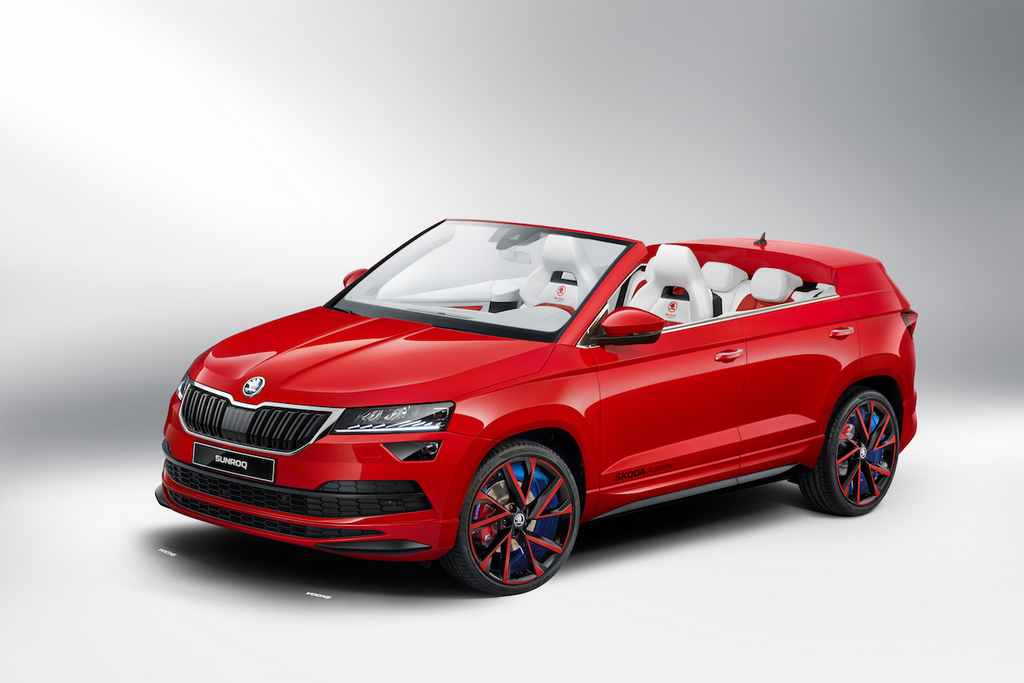 Skoda has revealed a cabriolet version of its smallest SUV, the Karoq and it was created by a team of 23 students at the Skoda Vocational School as their fifth conceptual project. Christened Skoda Sunroq, it is a cutesy and futuristic take on the Karoq and has its name carefully chosen from a huge list of entries suggested by fans and customers.

The time taken to finish the Skoda Sunroq project was eight months as the team worked on removing the hard roof at first. The pillars were redesigned along with exterior changes to go in line with the absence of roof. It comes fitted with a different set of bumpers, newly built door assembly, new rear portion, etc.

Skoda Academy branding can be seen on the front seat backrests and door panels while the interior adorns a dual-tone red and white theme. The students have given a new red colour scheme as well along with backlit door handles, Skoda logo projections and two-tone 20-inch alloy wheels on the outside to keep the overall design in synchronization.

With Skoda not putting the Sunroq into production, it is ambitious to expect a similar take on the compact SUV in the near future for a road-going version. However, new plug-in hybrid and all-electric versions are said to be in the works. The concept measures the same as the standard Karoq with a length of 4,382 mm, width of 1,841 mm and stands 1,605 mm tall.

As for the powertrain, the Skoda Sunroq uses a 1.5-litre turbo petrol engine which is good enough to produce a maximum power output of 150 PS and 250 Nm torque. It is mated to a six-speed manual transmission driving the front wheels and has claimed top speed of 195 kmph.

It does 0-100 kmph in 8.6 seconds and has shock absorbers borrowed from Octavia RS for much lowered stance. The standard Karoq is expected to launch in India next year and it will be the least expensive SUV from Skoda sitting below the Kodiaq.