Check out this digitally rendered image of Skoda Kushaq Scout, designed along the same lines as the Kodiaq Scout SUV

The 2021 Skoda Kushaq recently had its global debut, and it is scheduled to go on sale in India in July this year. The Kushaq is the first product to be built under the Volkswagen group’s India 2.0 project. Even though the SUV is yet to launch, it has managed to generate a lot of buzz in the Indian market, and people are already anticipating what else Skoda has up its sleeve regarding the Kushaq.

Here, we have a digitally rendered image, which imagines the Kushaq in an off-road-ready avatar. Created by SRK Designs, this model has been christened Skoda Kushaq Scout. The changes to the SUV include a new Pine Green paint scheme, with ‘Scout’ badging on the side vent. The alloy wheels are different as well, featuring the same design as the Skoda Kodiaq Scout that was previously available in India.

Bash plates have been added to the front bumper and the side door cladding, to protect the vehicle when exploring off-road trails. These changes are rather subtle, but look cool nonetheless. We wish Skoda would actually launch the Scout variant of the Kushaq, but the chances of that are quite low, at least in India. Also, while the Kodiaq Scout had all-wheel-drive, we doubt Skoda will ever offer the Kushaq with AWD.

Skoda Kushaq will be available with two engine options in the Indian market. The first one is a 1.0-litre turbo-petrol motor, which can generate a peak power of 115 PS and a maximum torque of 175 Nm. This engine can be paired with either a 6-speed manual or a 6-speed torque converter gearbox.

The second engine option is a 1.5-litre turbo-petrol unit, which is capable of developing 150 PS and 250 Nm. Transmission options with this powerplant include a 6-speed manual and a 6-speed dual-clutch automatic gearbox. There will be no diesel engine on offer. 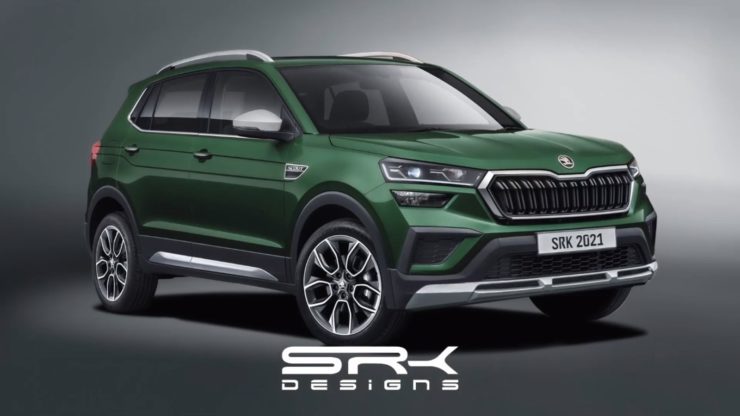 The Skoda Kushaq is expected to have a starting price of around Rs. 9 lakh (ex-showroom) upon launch. In the Indian market, its closest rivals will be the Hyundai Creta, Kia Seltos, Renault Duster, Nissan Kicks, Maruti Suzuki S-Cross, and its upcoming cousin, VW Taigun.