Skoda will be unleashing the RS performance variant of the flagship Kodiaq SUV at the Paris Motor Show early next month. Leading up to the global unveil, the Czech brand has been running a teaser campaign. After revealing the wildly exaggerated design sketches, Skoda has released images of the Kodiaq RS’ interior.

Skoda has been serious about the RS and resultantly took it to the gruelling Nurburgring and came out with a new title. The Skoda Kodiaq RS has become the fastest seven-seat production SUV, announcing the profound intentions of the company in making track-biased performance machines with versatility of a family car.

The SUV is sportier than the regular Kodiaq on the outside and courtesy of the latest images we now know that it is as equally impressive on the inside. The cabin carries a dark theme with contrast stitching as it is upholstered in Alcantara material with perforated and diamond quilted red stitches that can also be seen in door panels, flat-bottom steering wheel and gear lever.

The heavily bolstered seats could provide a commendable driving position while the steering wheel with integrated controls encompasses the Skoda black badge. Other elements are finished in faux carbon trim and there is a black headliner complementing the stainless steel pedals. 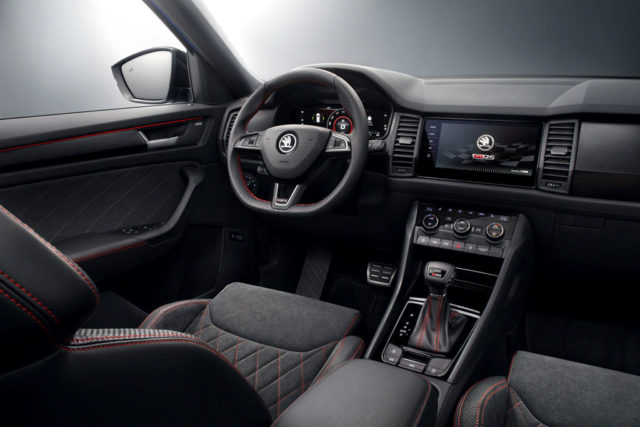 Skoda has widely been reported to employ the 2.0-litre twin turbocharged four-cylinder diesel engine producing 236 horsepower and 500 Nm peak torque. The suspension has been stiffened up focussing on corner carving while the exterior body kit and 20-inch wheels aid in more performance.

Skoda retails the Kodiaq in Style TDI 4X4 AT variant in India at Rs. 34.84 lakh (ex-showroom). Considering the well-received Octavia RS that uses a 227 bhp developing 2.0-litre petrol engine, Skoda might try to sell the Kodiaq RS in limited numbers in the near future but it may ask for a substantial price increase over the standard model.