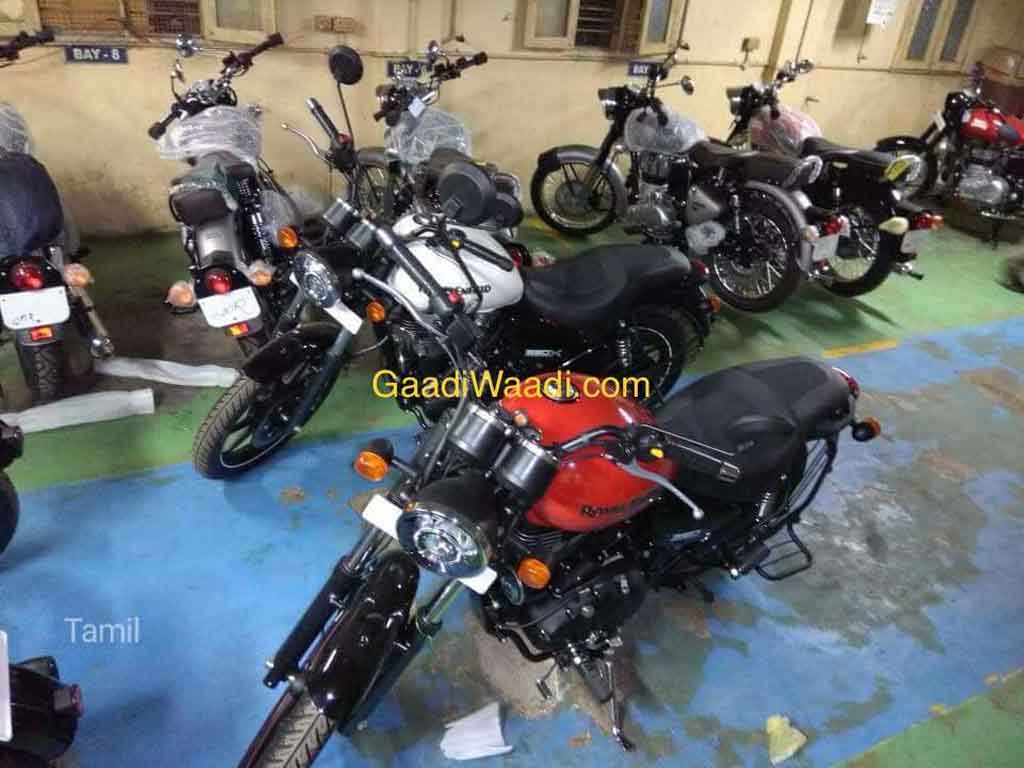 Recently, Royal Enfield has been adding up new paint schemes to the current lineup to attract more prospective young buyers. In a bid to do so, we have indeed seen different interesting colours being applied to its top-selling range and topping them all off is a brand new version that appears to be the sportiest of the lot.

The Chennai-based manufacturer has finally launched a new variant of the Thunderbird cruiser following a number of spy pictures in the domestic market and it has been christened as the Thunderbird 350X. The X adds the much wanted aggression to the Thunderbird nameplate and it’s more than just a stylish makeover. It is accompanied by its larger sibling the Thunderbird 500X.

Also read: Would You Buy An Electric Royal Enfield Classic 500? 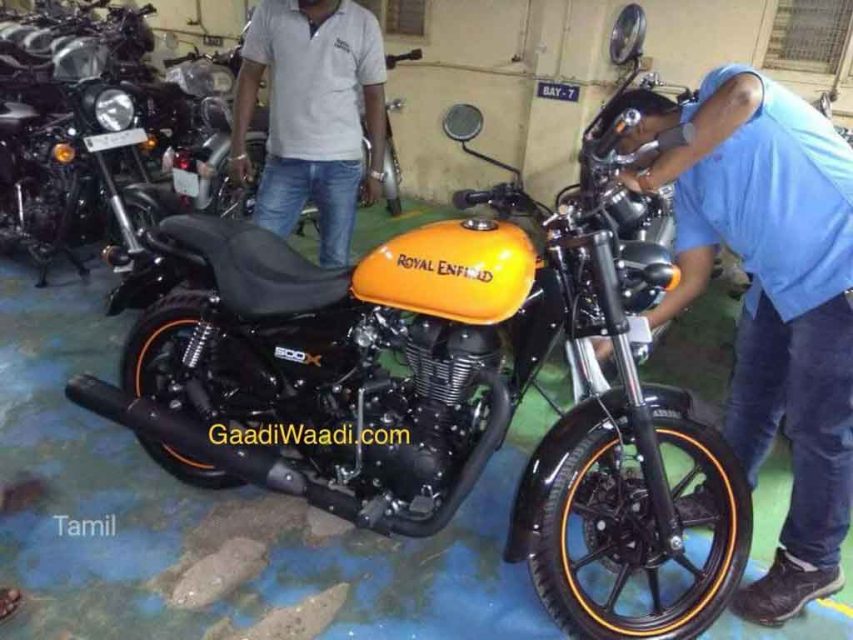 Of late, Royal Enfield has been showing its eagerness to become a worldwide leader in the middleweight motorcycle category. The company revealed its 650 cc twin models at the EICMA 2017 in Milan and it lured everyone’s attention and received good response. The 350X will be another strong weapon in the armoury.

Here is everything you need to know about the Royal Enfield Thunderbird 350X:
The Royal Enfield Thunderbird 350X has entered the Indian market along with its 500X cousin. The ‘factory custom bikes’ as RE says are a positive way of kicking starting the year for the brand as two new models – the Continental GT 650 and Interceptor 650 – are waiting to be launched sometime later this 2018. 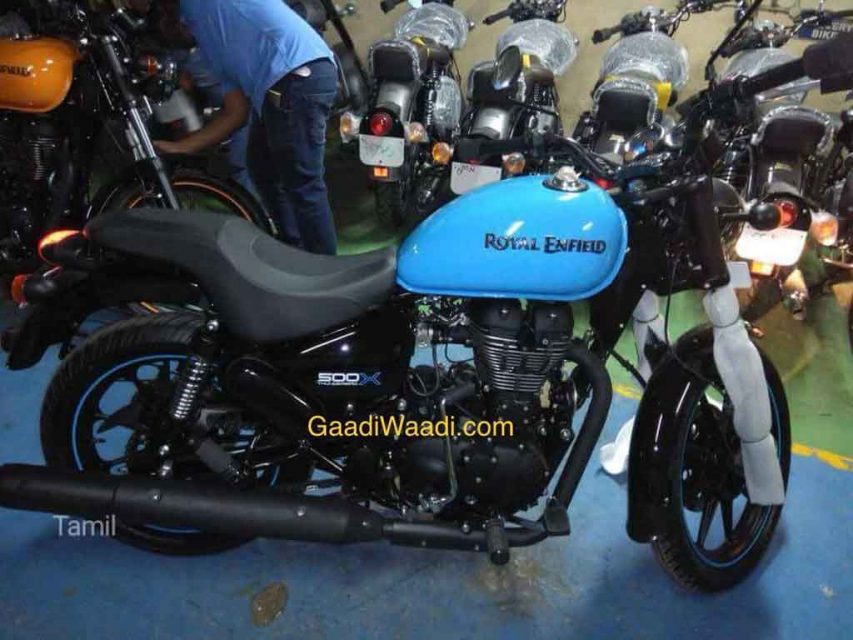 It is priced a little higher compared than the standard version that currently has a price tag of around Rs. 1.45 lakh (ex-showroom, New Delhi). As they are several modifications to endorse about the premium is inevitable. It features tubeless tyres as well – first for a production Royal Enfield.

Amidst the design of the Thunderbird 350X is all the more distinct in comparison to the regular model, Royal Enfield will make this motorcycle available with the same 346 cc TwinSpark engine.

It gets powered by a single-cylinder four-stroke air-cooled fuel-injected motor which is good enough to produce a maximum power output of 20 PS at 5,250 rpm and 28 Nm of peak torque delivered at 4,000 rpm. It is mated to a five-speed constant mesh transmission.

Dimensionally, the Royal Enfield Thunderbird 350X is identical to its regular sibling, we suspect. It has a length of 2,060 mm, width of 790 mm and height of 1,205 mm. The Thunderbird 500X tips the weighing scale at 195 kilograms and it features a tank capacity of 20 litres with 1,350 mm wheelbase and 135 mm ground clearance.

The Royal Enfield Thunderbird 350X boasts distinctive design elements that allows for more appeal compared to the regular model. The styling modifications are largely striking and visible to the eye and you will be misled by thinking that it is a mod job after all when you see one on the roads. The factory-born motorcycle sports revised seats, bright colour options that look funky and black alloy wheels enhancing the sportiness.

Royal Enfield has brought in more changes to this new model apart from the aforementioned ones. The Thunderbird 350X features a new handlebar that wears a full black paint scheme. Apart from that, there is a fully blacked out engine block and a matte black painted exhaust. The alloy wheels are secured with tubeless tyres and there are sporty body-coloured rim decals that young buyers would drool. The suspension setup too wears matte black finish.

Also Read: RE Continental GT 650 To Reach All Showrooms Across India By End-2018 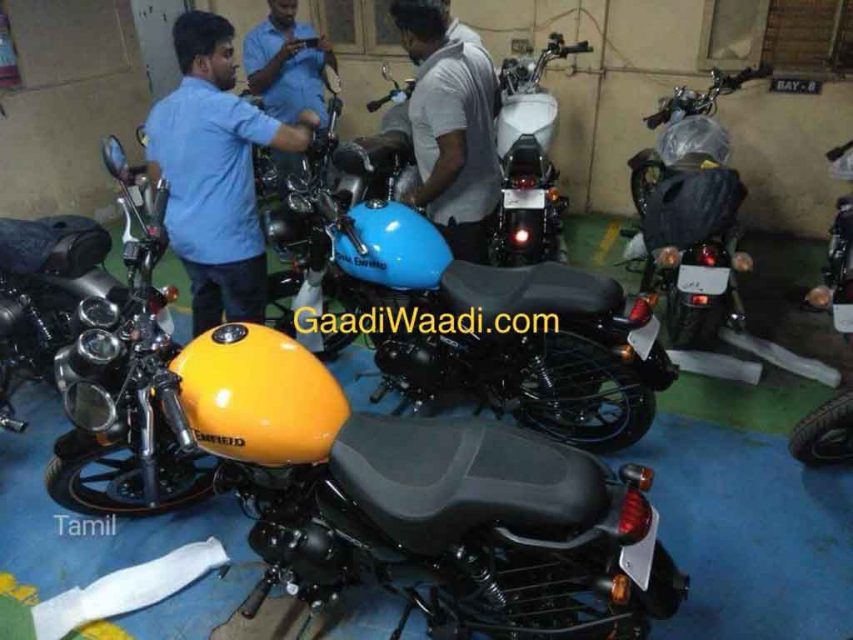 Overall, the retro motorcycle manufacturer didn’t miss out any chance of making the new model stylish and attractive. Other important equipment Royal Enfield has added are the LED Daytime Running Lights to the headlamp while the taillight comes with an LED unit too.

The motorcycle gets 19-inch front wheel and 18-inch rear wheel while braking duty is performed by disc brakes on both front and rear wheels. Because of these updates, the upcoming Royal Enfield Thunderbird 350X looks more like the Triumph Bonneville, instead of a regular Thunderbird.

With all the mechanical bits same as the standard version, the Royal Enfield Thunderbird 350X rides on 19-inch front and 18-inch rear tyres and have ten spokes. Up front, the braking duty is done by a 280 mm disc with two-piston caliper and 240 mm disc with single piston caliper at the rear. It is sprung on 41 mm telescopic front forks with 130 mm travel and twin-gas charged shock absorbers with five-step adjustable preload and 80 mm travel at the rear.