Royal Enfield is planning to expand its lineup in the Indian market, and the brand recently filed a trademark for a new motorcycle name

Royal Enfield has recently filed a trademark for the name ‘Scram’ in India. The name surely seems good for a new scrambler motorcycle, which is what the current speculation suggests. There is no information available about this upcoming motorcycle at the moment, but we believe it could be based on the RE Interceptor 650.

In recent times, adventure motorcycle and scrambler motorcycle genres have been gaining popularity in India. Royal Enfield has the former covered with the Himalayan, but not the latter category. The Interceptor 650 retro-style roadster would be the perfect platform for a scrambler motorcycle, and sharing platform and parts with existing models would help the manufacturer save production costs as well.

No test models of the Royal Enfield Scram have been spotted yet, so we aren’t sure about its styling. It will probably have a design similar to Interceptor 650 and Continental GT 650, but likely with a different fuel tank, re-routed exhausts, a different seat, and perhaps upgraded suspension. It would also get a bash plate, tall handlebars, and a ton of new accessories. 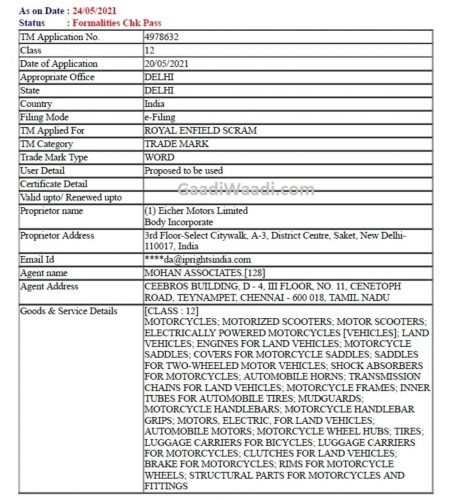 The engine of the upcoming Royal Enfield Scram will likely be a 648cc, air/oil-cooled, parallel-twin unit. In the Interceptor and Continental GT, this motor generates a peak power and torque of 47.65 PS and 52 Nm, respectively, and comes mated to a 6-speed transmission, with a slipper clutch available as standard.

These, however, are only speculations, and we’d have to wait for a few details to leak or spy pictures to emerge before we can comment on it further. Royal Enfield currently has plenty of new motorcycles lined up for launch in the Indian market, including the new-generation Classic 350, Hunter 350, a new 650cc cruiser, and a new 650cc roadster.

The next-gen Royal Enfield Classic 350 will likely be the next launch from the brand. The new model will share its platform and engine with the Meteor 350, and will be better equipped than the current-gen model. We expect the next-generation Classic 350 to go on sale in the coming months, likely before Diwali this year.